Influential Barcelona midfielder Javier Mascherano has become the latest in a line of current Blaugrana stars to be targeted in a case of tax evasion. After Lionel Messi and Neymar, Mascherano is the third South American player plying his trade with the Catalan giants to be charged with tax fraud.

According to reports in the Guardian, Mascherano has been charged with two counts of defrauding the Spanish tax authorities; the first of €587,822 (£434,629) in 2011 and the next in 2012 of €968,907 (£716,399), both done while being a Barcelona player. He is alleged to have concealed earnings from image rights by using companies set up in the United States and Portugal.

The Argentina international, however, paid the money owed plus almost £150,000 interest earlier this month according to the office of the public prosecutor, a factor which could work in the player’s favour if he is found guilty. According to the same Guardian report, Barcelona did not immediately respond to a request for comment.

Mascherano is the third Barcelona player after Messi and Neymar to be charged, something which the Barca fans sense might have greater political connotations. Earlier this year, Messi was caught up in a similar offence and will face trial over keeping €4.1m (£3m) from Spanish tax authorities between 2007 and 2009.

In another case of a Barcelona player falling foul for deceiving the taxmen, Neymar also had his assets frozen by the Sao Paolo federal court only last week. But the charges against Neymar are from before he joined the club in 2013, although Barcelona Football Club were cited as the source of Neymar’s unreported money. Neymar is alleged to have evaded £10.5m in taxes, and has now seen about triple that amount in assets being frozen.

Neymar’s transfer to Barcelona in the summer of 2013 from Santos also led to accusations of tax fraud on the club. Barcelona were alleged to have misled the taxmen by claiming to have signed Neymar for €57.1m but later admitted that the actual amount totaled to €86.2m after including additional payments. This saga even led to the resignation of then Barca president Sandro Rosell in January 2014, and current president Josep Maria Bartomeu and Rosell are due to stand trial over the case.

There have been many instances of footballers making use of tax-avoidance loopholes in the past. In 2012, reports emerged that Premier League players were evading taxes by cashing in on directors’  loans, and used their image rights contracts to lower their tax bills. Which has stemmed the belief among the Barcelona fans that the Spanish state, based in Madrid, is against the club and the representatives of Catalonia.

The Catalan elections, which were held on 27th September, is the procedure which decides the composition of the parliament of Catalonia and its government. This year though, the elections were also the basis of finding out the extent to which Catalans are in favour of independence. With the pro-independence party winning the elections, it now gives them more impetus to break away from Spain to make Catalonia a separate country.

While the Spanish government based in Madrid is refusing to budge under the pressure of the separatist movement and pledging to challenge any unilateral moves towards independence in court, Barca fans are naturally inclined to believe their players are being made easy targets. Influential figures at the club like Pep Guardiola and Gerard Pique have also openly pledged their support for the separatist movement.

Even the pro-Madrid papers have headlined the implications of a separate Catalonia, suggesting Barcelona could be going the way of clubs like Ajax or Celtic should Catalonia break away from Spain. Both Marca and AS ran strong headlines last week providing a sporting twist to what has been the major talking point of politics in Spain, as sourced from pro-Barcelona website Grup 14. 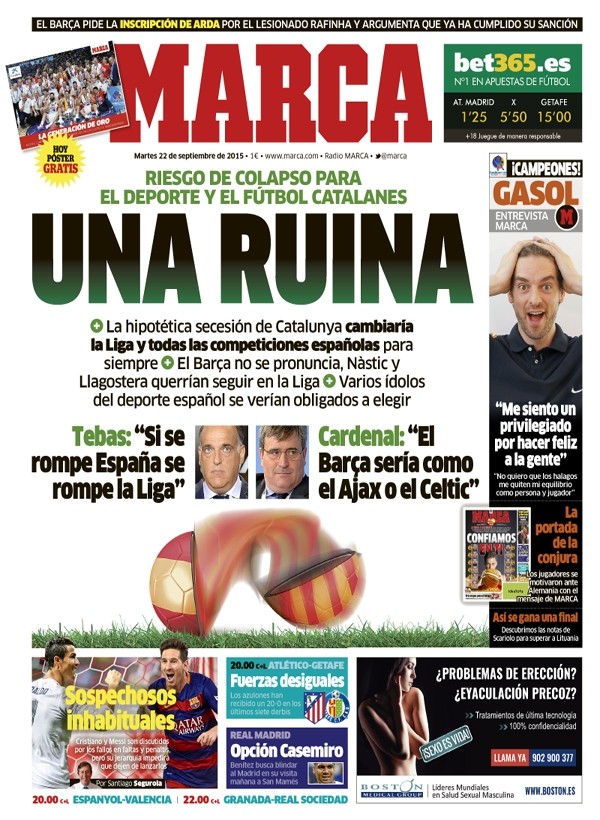 Marca (pictured above) led with the headline on their cover: “IN RUINS: Catalan sports and football on the verge of collapse.” While Diario AS (pictured below) went with the following quote from Spain’s sports minister Miguel Cardenal on their cover: “Cardenal: If Catalonia becomes independent, Barça would end up like Ajax or Celtic.” 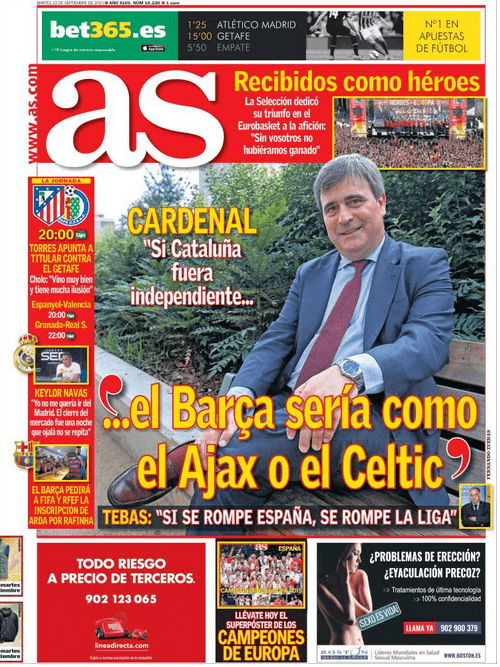 Meanwhile Javier Tebas, whose political position is very right wing, nationalist and against the left wing separatists, has said that if there was Catalan independence, it would effectively see the breakdown of the Spanish league in the sense that Espanyol and Barcelona could not be part of it. Spanish football expert and Guardian journalist Sid Lowe even believes Tebas is trying to use his league position and influence to discourage people from voting in the Catalan independence.

In another bizarre social media outburst yesterday, Neymar’s agent Wagner Ribiero offered a lengthy response in light of his client’s latest tax scandal and wrote to Neymar Sr about why he should close his businesses in Brazil. It also carried a subtle message, that read: “But leave Neymar to play a few more years … and end his career in Europe, preferably at Real Madrid,” words from which it can be roughly inferred that playing at Real Madrid wouldn’t have created the current fracas, which further appeared to strengthen the conspiracy claims of the Barca fans.

However, apart from Mascherano, Messi and Neymar, there have also been other athletes who have come under the scrutiny of the Spanish tax offices of late. Former Real Madrid and now Bayern Munich midfielder Xabi Alonso has been recently added by a Spanish state prosecutor to the list of athletes in Spain whose finances are under investigation.

And not only Alonso, but Iker Casillas, Samuel Eto’o, Luis Figo and Rafael Nadal are also among the high-profile athletes whose finances are being investigated. This brings into question the concerns of the Barcelona fans regarding their players being targeted, and how true the supposed anti-Barca motives from the powers that be are, as nothing can be ascertained at this point in time.