Everton crashed to a 3-0 defeat against Serie A outfit Atalanta last night and the Toffees faithful are already calling for Ronald Koeman’s head.

The Merseyside outfit are going through a rough patch right now and they have not won any of their last five matches in all competitions. Everton have been comfortably beaten by the likes of Chelsea, Spurs and now Atalanta. They will be dreading their trip to Old Trafford this weekend.

Ronald Koeman spent a significant amount of money this summer and none of his summer signings have made an impact so far.

Everton were outplayed and out-thought by a weaker side last night and the fans took to social media to express their frustrations. While some of them were unhappy with the manager signing so many attacking midfielders, others seem to have lost their patience with him already.

It would be premature of sack Koeman just yet but there is no doubt that he is under tremendous pressure right now and the results need to improve soon.

Here is how the Everton fans reacted to the defeat on social media:

@Everton are u going to make the players reimburse the away supporters as they paid a lot to watch that embarrassment? #Poor #StrikerNeeded

If the players were the problem Koeman should drop them ALL and play the U23’s. But they arent, its HIM. #koemanout

Ronald Koeman even shared his thoughts on the game on his official Instagram account. The Dutchman took responsibility for the defeat but was slammed by the furious Everton fans again. 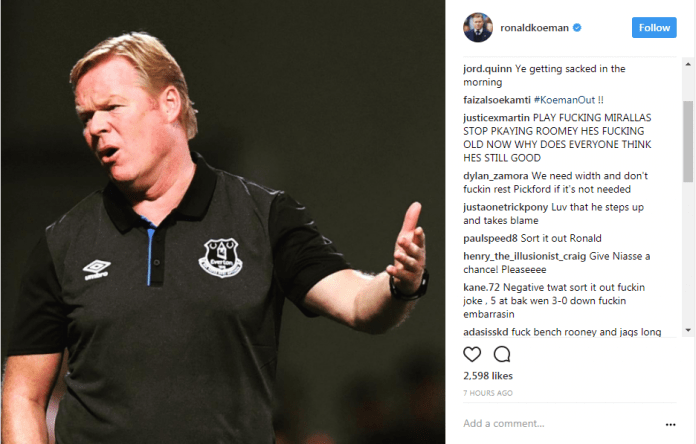