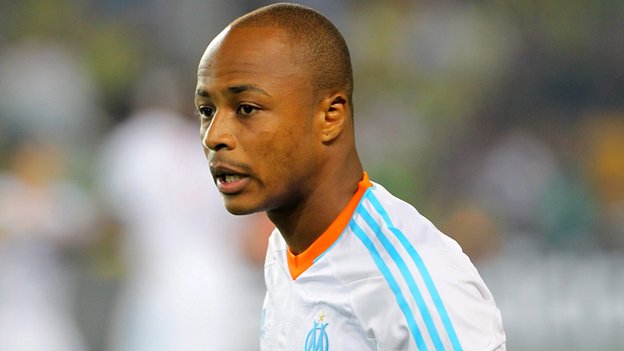 Olympique Marseille have given permission for their winger Andre Ayew to seek a move away from the side for the right price.

‘Ayew has informed me of his intentions. If an offer from a big blub comes in and we like it, I will investigate it.’ – Marseille president Vincent Labrune.

The 23-year old made 35 appearances for the Ligue One side last season, scoring nine goals. He led Marseilles to a runners-up spot in the league with rivals Paris Saint-Germain winning the title.

A number of sides across Europe had expressed an interest to sign the Ghanaian international, but were swiftly dismissed by his side.

However, it now appears Marseilles are willing to sell Ayew should a side meet their reported £15M asking price this summer. His contract still has two years to run so the French side are in no immediate rush to let him go.

Premier League side Liverpool have emerged the favourites to sign the winger in recent weeks, with manager Brendan Rodgers being an admirer of the 23-year old.

Liverpool are yet to make an official bid for Ayew, but they could step up their interest with the Premier League season fast approaching.

Ayew has previously revealed he’d consider offers put to him from other sides this summer, but would only leave if the deal felt right. The Ghanaian international would prefer playing for a side in the Champions League next season so the protracted move to Liverpool could fail to progress.

Serie A giants AC Milan were another team previously linked with the winger, and talks were said to have once been in the advanced stages. However, the club pulled out after failing to agree terms and they haven’t enquired since.

Question marks are hanging over Ayew’s future in France, but he’s expected to reveal his plans in the coming weeks.