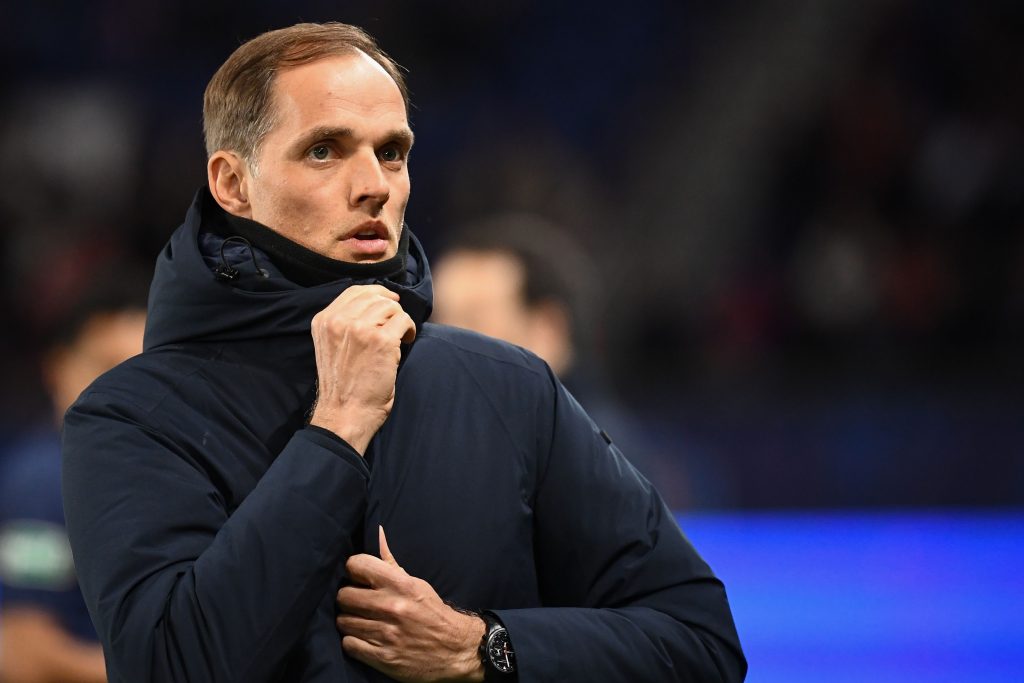 Frank Lampard said his farewells at Chelsea yesterday, and now his replacement has already been selected – Thomas Tuchel.

The German tactician began his coaching career with Augsburg’s reserves in 2007 after impressing with the youth sides, moving on to then-newly-promoted Mainz in two years’ time.

After spending five years at the club, he replaced ex-Mainz man Jürgen Klopp at Borussia Dortmund (whom he had also succeeded at Mainz), where he spent another two years.

His most recent destination was in France, as he spent over two years at the helm of Paris Saint-Germain, leaving with the highest win percentage in Ligue 1 history (75.6%).

Now that Tuchel has joined Chelsea, let’s take a look at the impact he might have at the club, and explore a few systems he might use with the Blues.

A change in managers at a club naturally brings a change in fate for many of the players there – some get a much-needed second chance, while some fall out of favour.

At Chelsea, the most obvious winners are their German contingent. Summer signings Timo Werner and Kai Havertz have clearly been misfiring, so having a fellow German as their manager should undoubtedly help them settle quickly, particularly with his Juego de Posición (positional play) style (a tactical concept where the pitch is divided into various zones through four vertical and multiple horizontal lines, with players tasked with flexibly occupying those zones before receiving the ball in possession).

While Werner and Havertz are two Germans who might flourish in attack, Antonio Rüdiger should find a way back into the core setup in defence. The centre-back was reportedly wanted by Tuchel at PSG, who obviously is an admirer. Expect him to start way more than 21% of his side’s Premier League matches now.

Another man who attracted interest from Tuchel in the summer was Jorginho, who was linked with a loan move to France. He has only started eight Premier League matches so far this season, but we can expect to see that number go up under Tuchel.

Christian Pulisic is among the better wingers that Chelsea have, but he started less than half of his side’s league matches under Lampard. Having worked with Tuchel at Dortmund, expect the American international to be quickly trusted by the German manager.

Thiago Silva is already a consistent starter at Chelsea, but he could even be elevated to captaincy under Tuchel. Although the Brazilian defender did depart during Tuchel’s tenure at PSG, it was against the wishes of the manager, who thoroughly praised him following his departure.

While Tuchel will undoubtedly use the abundance of young talent present in this Chelsea squad, it’s hard to see him trust the youngsters as much as Frank Lampard. So, as a whole, the young contingent is set to lose here.

Mason Mount, in particular, might have a torrid time. Lampard developed him on loan at Derby and immediately instated him into the starting berths of Chelsea when he took charge. Mount has been one of his bests and most trusted players ever since, but Tuchel might not favour the young Englishman so much.

Similarly, it’s hard to see the German develop youth talent as much as Lampard, so upcoming youngsters might suffer too. The first name that comes to mind in this category is Billy Gilmour, who could have been leaving on loan this month according to Lampard after his final victory over Luton Town. Tuchel might even let him go for good.

Considering the fact that Tuchel might favour Germans, the likes of Tammy Abraham, Andreas Christensen and Kurt Zouma might find it a bit harder to get a starting spot. Callum Hudson-Odoi will face similar competition too, but he was already losing under Lampard.

Thomas Tuchel is renowned as one of Germany’s best tacticians, and his aforementioned positional play creates a lot of exciting football. Throughout his top-tier career with the bigger clubs, his preferred system has been a 4-3-3, but he has used a variety of other formations too. Let’s take a look at all the variations he could employ in London:

Lampard’s favoured formation this season could well be used further under Tuchel, but with slightly different personnel and systems. 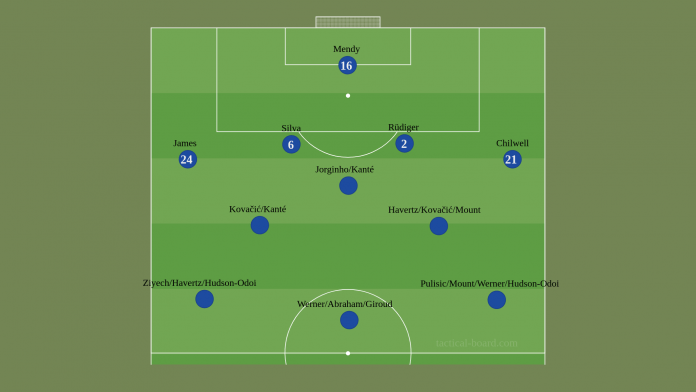 The defence and keeper are pretty much unquestionable since the full-backs and Mendy are by far the best that Chelsea have to offer, while Silva and Rüdiger are very much in the German manager’s good books. César Azpilicueta and Marcos Alonso will be the obvious second-choices on either side of the defence.

Jorginho will most probably pip Kanté in the defensive midfielder role, so the Frenchman might be forced to try and compete for a spot further up the pitch, where Kovačić will surely be picked ahead of him. The Croatian midfielder could also feature on the left of midfield, which happens to be one of Mount’s best chances of getting a starting spot, but Havertz should be the favourite for that.

A front three of Ziyech, Werner and Pulisic is most likely, but Callum Hudson-Odoi should push for a spot on either wing. Havertz might be promoted to right-winger in Ziyech’s absence, while Mount might be deployed on the left wing, hopefully ahead of Werner. The German striker will unquestionably be the first choice down the middle, with Abraham and Giroud left to scrap for the second-choice role.

Tuchel certainly likes a good high press, so in this system, Havertz could be called forward from the right of midfield to aid the front three in pressing. Further back, Chelsea would fall into a regular 4-3-3/4-5-1 while defending.

What’s more interesting, though, is how Tuchel will set up his side when in possession. 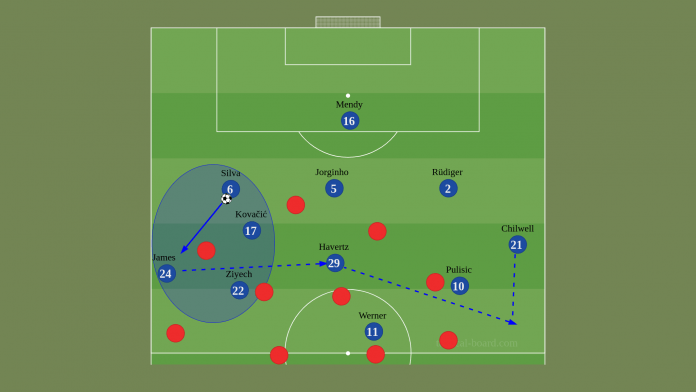 Joginho will drop in between the centre-backs during the build-up to make a back-three, as the full-backs will push up. Under the positional play system, the frontmen will have a lot of positional freedom as long as they occupy the set zones. Havertz should push further up than Kovačić, while Ziyech will be asked to do what he loves to – drop deep to receive.

In his system, Tuchel does love a good side overload. At Dortmund especially, his side would overload the left flank and then quickly play out to the right. At Chelsea, the opposite is much likelier, as Ziyech dropping deep and Silva’s ball-playing ability coupled with Kovačić’s passing capabilities should make the right wing favourable to overload. Chilwell’s pace and attacking qualities make him the obvious choice to release on the left as Pulisic tucks infield, with quick one-touch passing taking the ball to the other flank rather than a sweeping crossfield.

One of Tuchel’s experiments at PSG led to the creation of the formation with the most 2s – the 4-2-2-2, a possession-based variant of the traditional 4-4-2. 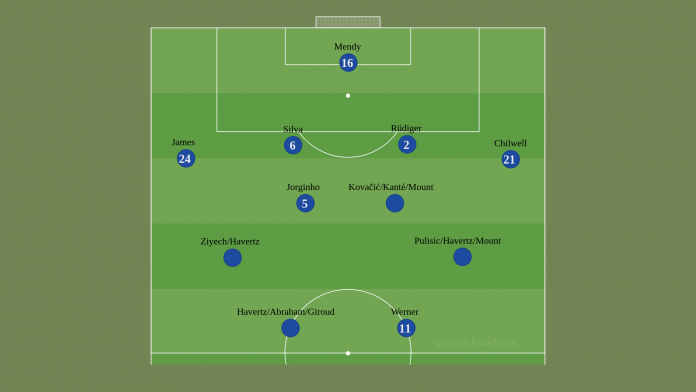 The defence and keeper would obviously remain unchanged, with Jorginho also certainly starting in holding midfield. Kovačić should partner him ahead of Kanté, while Mount too could be used there. Ziyech and Pulisic should get the spots further forward, but Havertz could be used as a second-choice on either side, with Mount in contention for the spot on the left too. Werner must start as a striker in this system, but the more intriguing selection will be next to him – Havertz seems the best fit for the system, but Abraham and Giroud, being full-time strikers, won’t be too happy to see the German start ahead of them.

The build-up and attacking phases in this system should very much be distinct. 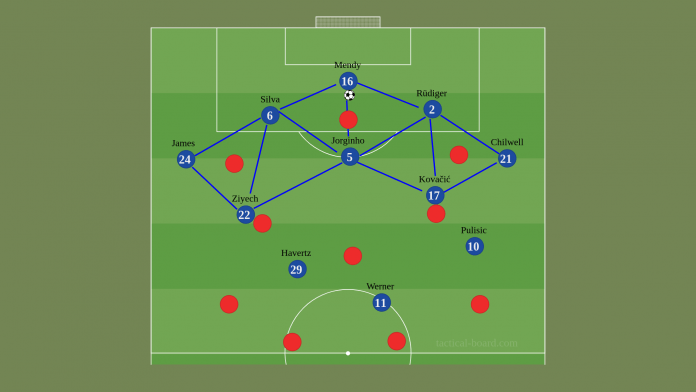 The keeper will have a key role in the build-up, so Mendy’s ball-playing ability will be tested to the limit. The centre-backs will split to either side of the keeper with Jorginho dropping to the very heart of the triangle-filled network. The full-backs will not push too far up yet, as Ziyech will drop almost in line with Kovačić to create about seven passing triangles in a 3-3-2.

Further up, things will progress quickly: 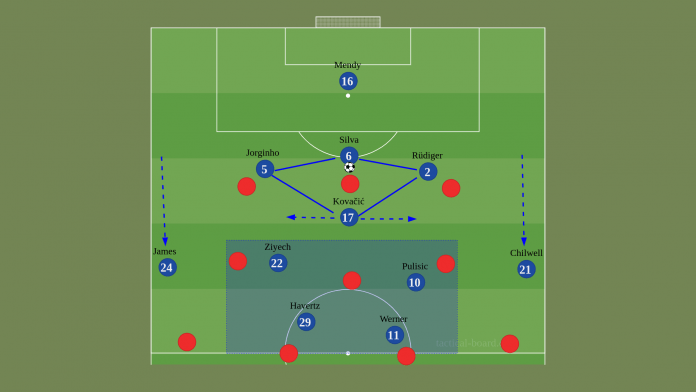 In this system, Tuchel likes to have his centre-backs and holding midfielders stay back to combat the opposing press in a 4v3 or 4v2 depending on the other team’s system. Further up, the German manager uses his wide attackers and centre-forwards to create a central overload, opening up space on either flank for the full-backs to push forward. Thereafter, Werner could provide a direct running threat at the opposition defence, pushing them further back and opening up vertical space for the likes of Ziyech and Werner to operate in.

Out of possession, the front-four can easily be used to gegenpress, while further back, it would make sense to drop into a 4-4-2.

There are two other systems which Tuchel has only dabbled in for a few matches, but he might want to expand upon those ideas at Chelsea. 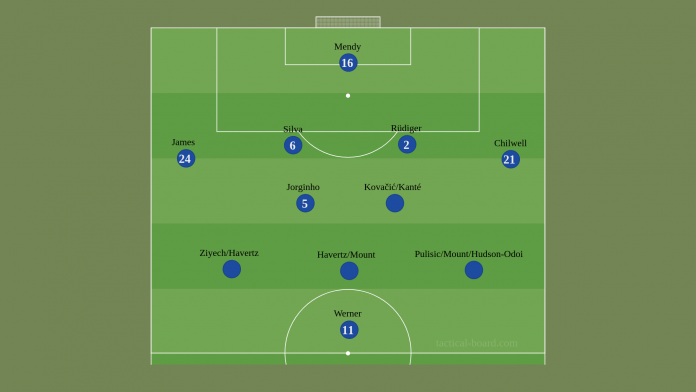 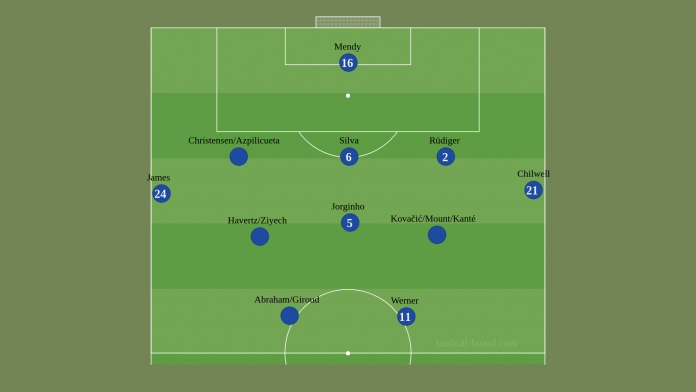 A more left-field option is then 3-5-2, which Tuchel has barely used one or two times, with the most famous application being in the second half of the Champions League group stage against Manchester United this season, when the German tactician countered the Red Devils’ midfield diamond by using his wing-backs to maraud up and down the flank. This is a real outside shout, but it might be used occasionally to catch the opposition off guard. Don’t expect it to be the main system, though.

Under Tuchel, Chelsea are guaranteed to play a very exciting brand of football, but that is not why Lampard was sacked. The Englishman lost his job because his side was massively underperforming, with certain disagreements perhaps contributing to his departure.

This is why the appointment of Tuchel is a bit puzzling. Like Lampard, Tuchel’s teams play great football, but also like Lampard, Tuchel doesn’t seem to win too much. At Dortmund, he only won a DFB Pokal in two seasons. In Paris, he won six out of a potential eight domestic trophies, which, considering the huge gap inequality between PSG and the rest of France, could even be considered an underachievement.

Worse yet, Tuchel’s last two departures have not come because of underperformance – he has left after some sort of a conflict with the club board, particularly in terms of transfers. While he will have a fair amount of money to spend with the Blues, the Chelsea board are renowned for being trigger-happy (as we saw with Lampard), so he will have to work hard to stay in their good books.

Further, the timing of Tuchel’s appointment is questionable, to say the least. If they brought him in a couple of weeks ago, he would have been able to buy a few players he liked in January. Now, he will have to work with limited resources, and if Chelsea under-perform the pressure mounting on him might contribute to this vicious cycle of sackings that the Pensioners are renowned for.

There is no question that Tuchel is a great manager, but all things considered, he is not too much better than a more experienced and tactically-adept German Frank Lampard. While he is arguably the best choice among the few club-less managers at this moment, is he the man that Chelsea need in the long run? Perhaps not, especially considering Lampard’s fate.