India
Home News an important season ahead for joe hart 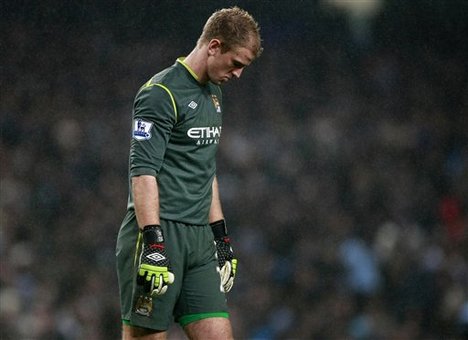 Manchester City and England goalkeeper Joe Hart faces his most important year in regard to his club and country prospects.

Most recently, the 26-year old won the Golden Glove award for a third consecutive season – making 18 clean sheets in the Premier League during 2012/13. However, he was guilty of a host of goalkeeping errors which led to goals, and it’s now becoming an all too familiar occurrence.

Before the opening day of the 2013/14 Premier League campaign, Joe Hart made a high-profile error on international duty in a pre-season friendly against Scotland. He failed to stop a James Morrison shot from the edge of the box and has been under scrutiny as a result.

Mistakes have been more frequent in the last two seasons for Hart, and with the 2014 World Cup approaching next summer, he will be desperate to eradicate them.

A host of football pundits and experts feel Joe Hart isn’t being pushed hard enough by genuine competition for a starting place at club and country level, and is subsequently suffering from subconscious complacency.

‘Joe Hart has made silly errors at crucial times. Those mistakes have crept into his game and I think that is because he has not been pushed for his place at club level or international level.’ – Ex-footballer Robbie Savage.

Despite being England’s number one goalkeeper for the last couple of years, manager Roy Hodgson has recently admitted Joe Hart is not guaranteed a starting place for his country as there are other viable options in goal.

However, there doesn’t appear to be much truth to the comments when looking at Hart’s competition. For England, Ben Foster of West Bromwich Albion, John Ruddy of Norwich City, and Fraser Forster of Scottish Premier League Celtic are the three goalkeepers closest to ousting the 26-year old from his number one jersey. For Manchester City, Costel Pantilimon and Richard Wright are the side’s other options.

It’s clear Joe Hart is pretty much unopposed for the number one jerseys for club and country, but is making a bad name for himself in regard to the errors creeping into his game.

The 2013/14 season could well make or break the man, and will judge his test of character if he can handle the pressure and scrutiny.