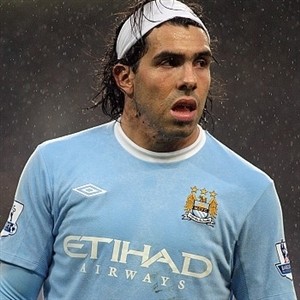 An apologetic … for Carlos Tevez? Just days after a scathing open letter? The same guy writing both? I guess stranger things have happened – remember Julian Faubert once played for Real Madrid.

Less than a week ago, I suggested Carlos Tevez finally “end his Manchester hell” and return once and for all to South America, the Copa Libertadores and probably a smaller pay packet. Many of the same sentiments which prompted that letter remain: the “poor little old Carlos” attitude he attempts to drum up – often using his family to do so, the fact his de facto posture when negotiating almost anything with his club is a “they don’t respect me” and the omnipresence of the positive proof of every conspiracy theory ever, Kia Joorabchian.

In the wake of an unsuccessful ₤35 million bid tabled by Brazilian club Corinthians, a few more details should be highlighted. Football is a business dependent on the consumer. Manchester City even moreso. Leaving aside ticket sales for a moment, sponsorship dollars (not real concern for City amid their Emirati sponsorships) depend on results, for which City almost exclusively rely upon him. Shirt and other apparel sales, TV revenue and global exposure are all derived from star players and there are few stars in England with either the marketability or skill of Carlos Tevez. And this doesn’t even consider the fact Manchester City face an uphill battle to match the worldwide popularity of their cross-town rivals from the Red half, Manchester United.

As City expand operations from a second-division club only eleven years ago, to a “safe” mid-table team, to the Champions’ League and finally – perhaps inevitably – to the Premiership title, much of that growth has come on the back of Carlos Tevez. Notwithstanding he was the first superstar to sign on for City, his goalscoring punch and (perhaps more crucially) global reputation as one of the best in the world make him perhaps the most required player in the English Premiership. Were City to replace him with, say, Karim Benzema or Gonzalo Higuain the results may even out – but the club would lose significant promotional monies because both potential replacements don’t have the global profile of the Citizens’ current captain.

So Tevez and Kia Joorabchian should be congratulated for their ability to play the media to their greater advantage; no-one creates the proverbial storm in a teacup like they do. Football is a game where the business side is based built around visibility – on club and personal levels. Why else would Champions’ League revenues be so high? Carlos Tevez is one of the most visible players in Europe. While the methods the pair employ may rub against the grain, they are the most obvious manager/player combination the game has recently seen. This means both are doing their jobs – Tevez on the pitch and Joorabchian off it.

It’s not Kia Joorabchian’s job to make Carlos Tevez liked, it’s to increase or maintain his player’s visibility as a star. In doing so, he improves his own financial situation. By agitating for a move every six months, he has performed admirably – It may even come as somewhat of a relief for the agent that Man City rejected yesterday’s bid. His methods may be distasteful, but they are most certainly effective. While praise for the dynamic duo would be disingenuous, grunted respect would not be.

Presence forms a large portion of celebrity. This point has been regularly proven over the past ten years by shows such as Australia’s Next Top Model, UK Idol and X-Factor. In a sport driven by television and marketing dollars, a top-line footballer’s role includes more than just banging in twenty goals a season. Kia Joorabchian seems to have recognised this earlier than most and therefore “plays the game” at a more advanced level than other powerbrokers. Like it or no – and not many actively like Carlos Tevez any more – football is a business and fans are no longer the lifeblood but just consumers.

As yet another Tevez Saga – the two words go together like “Rob Green” and “Howler” – rattles on, the outraged masses may have misjudged Tevez and Joorabchian. It’s hard to mistake greed, but often much harder to recognise business talent emerging before their time.

Matthew Wood regularly contributes to Soccerlens.  You can read more of his analysis and commentary at Balanced Sports, or follow him on Twitter @balanced_sports.