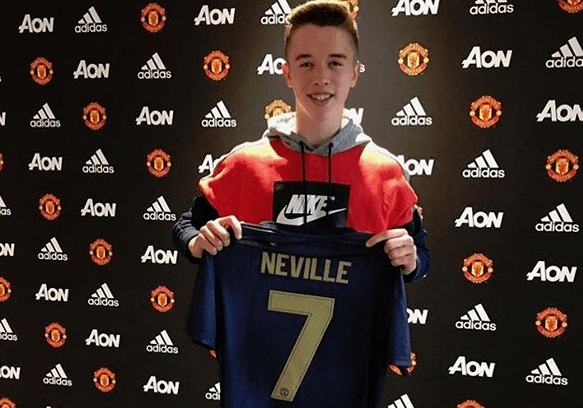 We reported on Tuesday that Manchester United had agreed a deal for Valencia midfielder Harvey Neville and supporters are delighted with the news. The 16-year-old is son of former United, Everton and England defender Phil Neville and will wear the No.7 shirt at youth level.

Wish him the best#@Old Trafford # son of the legend

Great news I bet Phil is a very proud dad.

The news has been welcomed by fans, likely down to Harvey being the offspring of a ‘Class of 92’ player and therefore continuing the United legacy for another generation. Phil Neville and brother Gary were popular players and have since become respected coaches and pundits.

Harvey’s had a difficult journey to make it this far. He started his youth career with the Red Devils before moving to Manchester City. His surprise stint at Valencia came about due to his father being appointed assistant manager. But now the teenager has a deal with United, he could have a bright future.

There’s a clear pathway from youth football to the first-team, evident from the rise of Jesse Lingard, Marcus Rashford and Scott McTominay who have all become regulars at United and senior internationals for their respective countries. Rashford and Lingard are with England at the 2018 World Cup in Russia.

Lingard, Rashford and McTominay racked up a combined 4263 minutes of Premier League football last season, so Harvey Neville should take hope as a young player that he can follow in their footsteps.