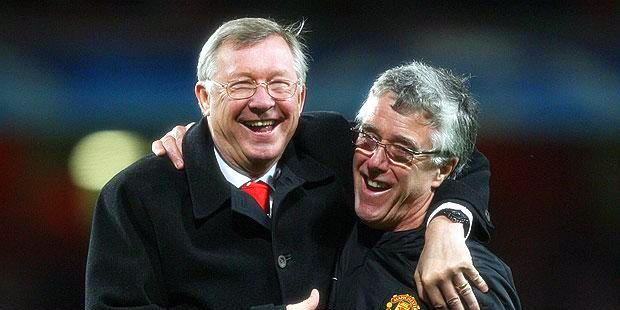 When the late Norman Davies left Manchester United in 1996, he left a significant dent in the club’s back-room staff. Most of the fans United has now probably don’t even recognise the name of the iconic former Kit Manager who served the club for over 20 years.

The man who replaced Davies has become an off-field United legend himself. Albert Morgan has been serving as the Kit Manager for Manchester United. Albie – as he is nicknamed at the club – rose to fame when Nike featured him in an advertisement of NikePRO inners alongside Cristiano Ronaldo.

Over the years Albert Morgan has spent at Old Trafford, he might not have done the great deeds for the club like Alex Ferguson or Ryan Giggs but he has served the club with devotion and has been very close with the team members.

Here is a transcript of kit-man Albert Morgan’s interview about the legendary Manchester United number 7s:

Albert Morgan: They’re all individuals but the main thing they have in common is that they’re winners. You look at Cristiano and he still shows that passion when he plays for Madrid – he’s a natural winner and he works very hard at it.

Q: Do you think that’s what the number gives you – a sense of pride and a real will to win?

Albert: I think so, yes – they are very proud of the shirt, though I would say the 7 has only come to light in the last few years.

Q: So you feel it has really blown up with all the younger players who have worn it recently, the likes of Ronaldo building on what George Best started?

Albert: When they started putting the names and numbers on the shirts, that’s when it really went big time as it got more personal.

I’ve had the privilege of seeing some great players like Johnny Berry wearing the shirt through the years but it was only a number then, yet when you started putting names to it – Eric, Ronny and the others, then it became more of a symbol.

Q: What the number 7 represent for the fans?

Albert: They look at these players that have worn the 7 and they’re just iconic figures for the fans, and Manchester United fans love to idolize their players. They see these players performing so well week in, week out and it just snowballs.

Q: Why do you think the number 7 shirt has come to have this massive significance?

Albert: I think it’s the fact that our great number 7s have all been leaders. The one that really springs to mind here is Robbo – he’s still a leader now and he’s 50-odd.

We’ve been blessed with these great number 7s who know how to lead men both on and off they pitch, set an example to their team mates and consistently score important goals.

Q: In 7 words, how would describe Cantona?

Albert: I only need one: iconic. There will never be another and I don’t want there to be because he is a top man. He helped others, and when he was banned he was absolutely fantastic with the young lads at The Cliff.

I’d like to meet up with a few of those kids that he coached and talked to just to see what kind of impact he had on their lives.

Q: How about Ronaldo?

Albert: Ronny was Ronny, another great lad who I think a lot of. I had some good times with Ronny, he scored some fantastic goals for the club and he hasn’t slowed down since he’s gone to Spain.

I’d love to see him come back here, as if there’s one player you’d want to pull you out of trouble, Ronny’s the man. He did that many times for us and scored some great, great goals while he was at it.

Q: If Cantona’s “iconic”, what one word would you use for Ronaldo?

Q: Last but not least, George Best. He played before your time as a kit man, but from your memories as a United fan, how would you describe him?

Albert: The game has changed a hell of a lot since George played but I still think that he could do the business today.

I idolized him and I, like thousands of others, tried to copy him when I was a kid – the haircuts, the teddy boy style and of course he was a fabulous player.

Q: One word for Best?

Q: Was he the one who started the no. 7 movement?

Albert: Not for me really. That was Cantona.

Albert: I’ve seen so many. One of my favourites was a header at the far post by Cantona against Tottenham Hotspur at Old Trafford – he out-jumped everybody, it went in like a rocket and it was just a great goal.

I know I keep going on about Cantona but another great one he scored was against Newcastle from a Phil Neville cross, and then there’s obviously Ronaldo’s freekick against Portsmouth, his shot against Arsenal in the Champions League semi-final. They’re all fabulous goals from our 7s. I love them all!

Q: Did any of the number 7s have any special rituals with their kit?

Albert: I’ll start with Ronaldo. Ronaldo was the one who started the ridiculous craze that most of them have got now – cutting the feet off their socks and making the long sock like a sleeve and then taping it up. That was all that he did.

Eric’s was the best – again it was the socks. We used to have to supply Eric with a brand new pair of socks every game and he used to put salt in his socks.

He never told us why and there were many theories mentioned. Eric’s got a tattoo of a red Indian chief on his chest and I used to think it might have been because the chief liked fish and chips but I don’t really know. Who knows why he did it but obviously it worked!

Q: In your mind which number 7 has had the most impact?

Albert: Eric. Eric all day long. Robbo was around when Eric came in but it was really Eric who kicked it all off. I can remember David Beckham when Eric left – he was desperate for that number 7 shirt, absolutely desperate, and he did very well in it when he got it.

Q: Do you keep in touch with Eric?

Albert: We see Eric, when he’s around he goes out of his way to come in and see everybody. He’s very human, very humble and he doesn’t like any fuss – Eric’s just Eric.

I have one abiding memory of Eric – I can always remember him walking into the dressing room one night and all the lads had their suits on. Eric comes walking in, he had a nice blue suit on with a lovely pair of tan shoes, and these were in the days when you’d only wear black shoes with a suit.

With this he had a nice blue three quarter length Crombie overcoat and a pink beret. If I’d worn it they’d have sent me to the madhouse but Eric looked a million dollars and I’ll never forget Steve Bruce sat on the other side of the dressing room reading his programme – he just looked up and went “Ooh aah”. And that sums up Eric for me.

Q: So what was Eric Cantona like behind closed doors?

Albert: Eric was a nice guy and loved a joke but he was a very private man. I didn’t see it myself but a friend of mine used to live around the corner from him in Worsley and apparently Eric used to go into one of the local pubs, The Bridgewater, and it was one of these very loud pubs with a booth in the back.

Eric was never out lapping up the attention – he used to go out the back and play dominos with the old lads and they loved him. He’d get himself a Coca-Cola and go sit in the back with the old guys. Apparently they worshipped the ground he walked on.

Q: So he kept himself to himself?

Albert: He really was just a normal man and he still is – he’s top drawer.

Q: Was he a big influence on the rest of the team in the dressing room before matches or at half-time?

Albert: He was a big influence on the other lads because he was the first one I met who’d be out practicing in the afternoon. Scholes, Becks, the Nevilles and all their generation were in awe of him. He’d be in The Cliff banging a ball against a wall, perfecting his skills – I can always remember being away for the cup final against Liverpool.

We were staying at a place called Oakley Court in Windsor, and all the staff were having the usual meal on the Friday night with the manager when I just saw this ground floor window opening in the hotel, and next thing I know there’s a leg coming out of it.

Then another, and then this body slipped down the wall and it was Eric. I just said to the manager “What’s going on here?” and of course the manager looked across and we both just started laughing as Eric was doing stretches and exercises against the wall – he had his leg up on the window sill and all.

He did that for about ten minutes, climbed back up the wall, shut the window and was off to sleep.

Q: Finally, what defines the spirit of number 7? Personality, style, play of play, the goals, the trophies?

Albert: I think it’s personality – you’ve really got to be something special in that respect to own the number 7 shirt.

Check out the Manchester United Collection paying homage to the illustrious history of the no. 7 Man United shirt at nike.com.