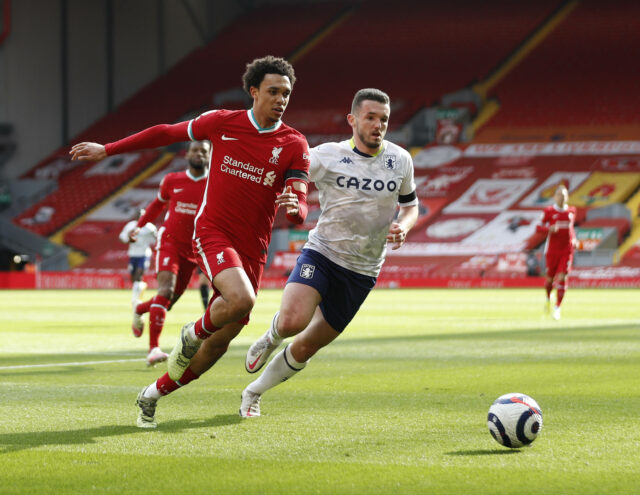 The 22-year-old has progressed from Liverpool’s youth academy to establish himself as one of the best right-backs in the world.

He hasn’t produced his best form this season compared to previous campaigns and was recently dropped by Gareth Southgate from the England squad.

He was poor against Real Madrid during Liverpool’s 3-1 defeat in the Champions League last week, but he responded sharply with a solid performance against Aston Villa over the weekend.

The youngster was solid in defence and scored a superb injury-time winner at Anfield, earning his side all three points.

Merson wrote for Sky Sports: “But fair play to Trent Alexander-Arnold the other day, he gets a lot of stick about his positional play, but he is a victim of his own success because he has been so good that when he has a couple of bad games, everybody says, ‘oh my god…’

“But what I like about him is he keeps on going and going, he never hides, goes to Arsenal and puts in one of the balls of the season, it was mind-blowing, like David Beckham.

“And then he scores the winner against Villa when he could easily have said, ‘I’ll sit on the halfway line, I do not need this coming to me with all the stick I’m getting.’

“But he does not and fair play, I like that and have a lot of respect for him doing that as it is very easy to hang out and say, ‘I do not want to do this, what happens if I balloon a ball into the stands…?”

Former Newcastle striker Alan Shearer has also praised Alexander-Arnold, and included him in his Premier League team of the week.

He noted that the Liverpool local lad “came up with the decisive moment of quality just when Liverpool needed it. That’s a big goal in the top-four fight.”

Merson is absolutely spot on here with his assessment. Alexander-Arnold is still young, and he is working on improving every aspect of his game.

He is a terrific passer and crosser of the ball and equally outstanding with his set-piece skills.

Alexander-Arnold needs to work on the defensive side of the game, but his qualities outweigh his flaws.