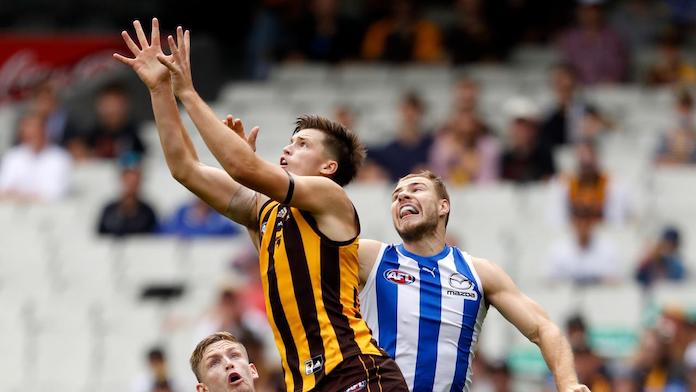 Round 1 of the 2022 AFL season saw the season start in blistering fashion, reminding everyone why footy is so missed during the summer months. This week kicks off in Footscray, with the Bulldogs vs Blues, and finishes with a tasty clash between the Dockers and Saints.

Are you thinking about having a few bets on round 2 of the AFL season? If so, take a look at the tips and predictions we’ve come up with below before you start spending your money!

Despite losing last week, it was an encouraging start for the Bulldogs, and fans will feel confident – if their defence steps up and starts performing. If not, the Blues, who beat the Tigers in the opening round, will look to exploit the defensive weakness of their opponents.

The victory by the Blues over the Tigers was an impressive one, leaving many fans excited for the season ahead. They’ve got the momentum going into this game, which is why we’re backing the Blues to come away with the win – back them at 2.50 with BlueBet.

Both the Swans and the Cats were impressive in their opening matches, the Swans taking down the Giants with a professional performance, and the Cats hammering Essendon in the biggest victory of the week.

One team will move forward to 2-0 this week, and we’re predicting the Sydney Swans to get things done. However, it should be a close game and we’re expecting both teams to be in the mix come the end of the season. Back the Swans at 1.75 with BlueBet.

The Crows were beaten in heartbreaking fashion in week one, losing in the last minute to the Dockers, after having engineered a superb comeback. The Magpies made a winning start to the season in Colin McRae’s first game in charge, beating the Saints.

Despite their rousing display in round one, we don’t think the Crows will have enough about them to get the win against the Magpies, who should progress to 2-0. You’ll be able to bet on a Collingwood win at odds of 1.42 with BlueBet.

Even the biggest Bombers fan will admit that their opening game was something of a mess, eventually losing 138-72 against Geelong. The Lions, on the other hand, beat the Power, although they too didn’t look all that convincing at times during the match.

Brisbane go into the match as heavy favourites, with their low odds suggesting the bookies see a thrashing coming. However, we think that the odds on Essendon are too good to turn down, and back them to bounce back. Bet on Essendon at 2.90 with BlueBet.

Port should have scooped a win in their opening game of the season, but ended up going down 80-69 to the Lions. The Hawks, on the other hand, managed to grab a hard-fought win at North Melbourne to get their season off to a great start.

While the Hawks looked good against the Kangaroos, we think that Port will be looking to kickstart their season, after tasting disappointment in the first week. We’d bet on the Power at odds of 1.21 with BlueBet – not great odds but we’re confident of the win.

The Suns were hugely impressive in the opening week, running over the Eagles in Perth to win by 27 points. The Demons, defending champions, were challenged by the Bulldogs in week one, but overcame the challenge like good champions should, winning 97-71.

Melbourne look like the stronger team in this match-up by some distance, even if the Suns put in a great shift last week. Their odds aren’t too appealing, but picking the Demons to win seems the sensible choice. Get them at 1.23 with BlueBet.

Both teams come into this match on the back of disappointing results. Both were expected to get the win in the opening round, but both fell short. This match is therefore vital for one of the teams to kickstart their campaign.

The bookies have the Kangaroos as favourites, but we fancy the Eagles to take home the win in North Melbourne, even if the Eagles are on something of a decline. Back the Eagles at 1.97 with BlueBet.

Richmond lost in round one for the first time in over 10 years, losing out to the Blues. The Giants also lost, going down against Sydney, but there were flashes of encouragement from them, which could bode well for their trip to take on the Tigers.

This is a really tough one to call, and the bookies agree, with Richmond the slight favourites. Overall, we’d have to agree with the bookies: Richmond are two good to put in back-to-back poor performances. Back the Tigers at 1.80 with BlueBet.

The Dockers came away with a hard-fought win against Port in the first round, managing to triumph despite a rousing Port fightback. The Saints, on the other hand, looked disappointing, losing to a Collingwood side they really should have beaten.

The bookies have Fremantle as strong favourites to win this match-up, and we agree with them – it would be unwise to back St Kilda after such a poor performance last week. Bet on Fremantle at 1.52 with bet365.