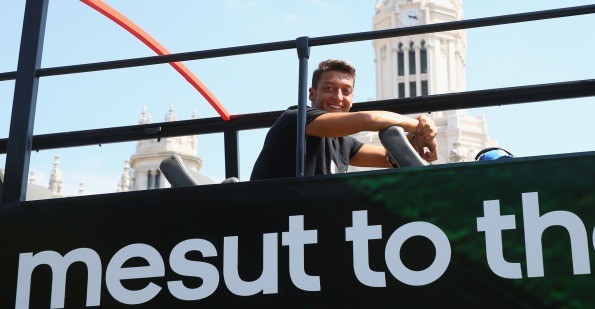 Adidas launched a new campaign in Madrid yesterday, together with Mesut Ozil, in order to welcome the world-class football player to the Adidas family.

The campaign entitled “Welcoming Mesut to the family” where the German international was seen in a a commercial with football greats such as Bastian Schweinsteiger, Kaka, Philipp Lahm, Manuel Neuer, Zinedine Zidane, Thomas Müller and Marcelo – all of them ambassadors of Adidas and are seen in the clip giving Ozil a friendly welcome to the family.

The campaign was developed by the Berlin-based advertising agency dieckertschmidt, and will be launched immediately, predominantly via digital media and primarily through the adidas social media channels, such as Facebook and YouTube. Further various Adidas athletes will also add the slogan “Mesut is my brother” to their Facebook profiles.

Ozil said: “I am proud to be part of the adidas family and I immediately felt at ease in my talks with adidas managers. adidas is the number one brand and has a unique history in football. I already wear adidas jerseys when playing for the German national team and for Real Madrid – so this partnership really cements our relationship.”

Herbert Hainer, CEO of adidas AG, said: “We are happy that Mesut Ozil has joined us. He is one of the outstanding personalities in German and international football and strengthens our portfolio of great players all over the world. With this partnership, we are once again highlighting our exceptional position as the number one brand in football.”

The 24-year-old had already signed a long-term contract with Adidas in July covering joint advertising and PR activities.

The move could have a huge bearing on his future too. With Ozil now a part of Adidas, it seems extremely unlikely that he would move to a club sponsored by Nike, which rules out the possibility of him joining Manchester United and Arsenal. Although it is premature and the logic is not iron-cast, Adidas offering Ozil a hefty financial incentive and tying him up just when his future seems to have headed out of Madrid, seems a little too obvious.