Why are Petr Cech (Czech Republic), Oliver Kahn (Germany) and Sergio Goycochea (Argentina) talking to the press about penalty shootouts?

On the surface, which where mainstream media reporting – here’s looking at you Reuters – stops, it seems like a great opportunity to hear about what some great past and current goalkeepers have to share about penalties from a goalkeeper’s perspective. Timely too, given that we’ve just hit the second round of the world cup and there’s bound to be a penalty shootout before long.

But it took just five seconds (I read fast) for this cynical blogger to pick out these comments, stashed near the end of the story:

“I have played with the ball and its fine. I didn’t have a problem,” Cech said. “It is not the right attitude to blame it on the ball. The ball is the same for everyone. It has been tested the same way every time.”

Kahn added: “The balls have changed over the last couple of years, they have become a lot faster and in addition to that in Johannesburg we are playing at an altitude of 1,700 meters, which makes the ball even faster.

“The goalkeepers have to work harder, but I don’t think that we can take the ball or the altitude as excuses.” he added.

They’re talking about the infamous Adidas Jabulani of course (field-tested by Soccerlens, mind you, so we know what we’re on about).

So I ask again – why is Cech talking to the media at an event together with Kahn and Goycochea about penalties during the middle of the World Cup? Who got them there? FIFA?

And then you look at the sponsors for the teams these three keepers are playing for / used to play for.

At this point I don’t need to tell you that Jabulani is an Adidas ball, or that after all the flak Adidas and FIFA have received over the ball from managers, players AND goalkeepers (keepers were the first to start complaining about it), you would have expected them to send out a PR message to repair the damage.

Let’s be clear, there’s nothing wrong with what FIFA / Adidas did – wheeling out former keepers to talk about penalty taking is a great idea and ideal to do so before the knockout stages start. It makes for some good stories (both Cech and Kahn have a few anecdotes to tell).

But you should never lose sight of the truth, and in this case the truth was simple – endorse the Jabulani. Repair our reputations.

Too bad someone saw right through, eh? 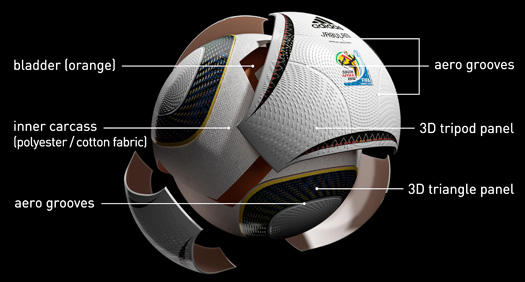