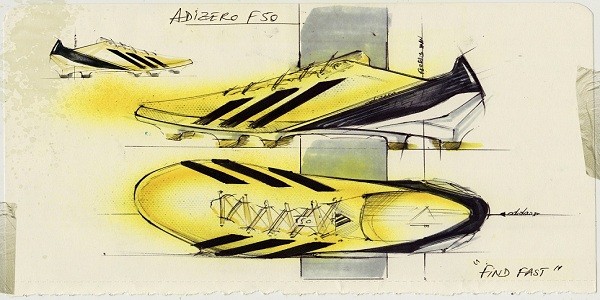 A product of precise engineering, the adidas adizero f50 is designed to get the maximum out of the boot in terms of speed.

At just 165 grams, the adizero f50 is one of the lightest shoes on the market. They will be released in a new yellow, black and green colors.

Special 3D printed texture on the surface of the boot allows exceptional ball control at speed and provides supple and stable construction.

The next-generation technologies are designed to enable players to ‘Find Fast’, and performance metrics can be tracked, analysed and compared against the best players in the world or with your friends via social media networks using the ground breaking adidas miCoach capability.

The specially designed cavity within the new adizero f50 houses the miCoach Speedcell which records statistical data such as top speed, distance covered, and active zones. Once the data is captured, it can be wirelessly synced up to a computer allowing players to analyse their performance, get tips and advice on how to improve, and compare themselves to others.

From mid-November onwards, some of the best professional players from around the world will be wearing the adizero f50 – including Dani Alves, Karim Benzema, David Silva and David Villa.