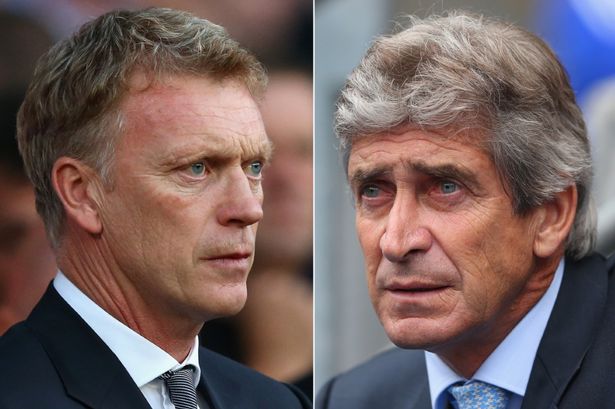 Sunday sees the first Manchester Derby of the season take place at the Etihad Stadium. Even though it is only the 5th game in the league for both sides, this derby is one of great significance. With new managers at the helm for both sides, victory in this game will be a huge psychological advantage for both sides.

United and City have been the frontrunners for the title in each of the last two seasons and are expected to be near the summit this time around as well. The victor here will not only gain three precious points, but also a feeling of being superior to the other side, albeit so early on in the season.

There are, as always, loads of talking points to discuss before a game of this magnitude. Here are 5 things to look forward to in the Manchester Derby:

This is the first Manchester Derby for both these managers and they will surely feel the butterflies in the stomach in the early stages. Manuel Pellegrini has the experience of big games having managed at Villarreal and Real Madrid, while Moyes is still an amateur from that respect. A victory here will be huge for both managers, as they look to find their feet with their new clubs and push for the title.

2) The Resurgence of Rooney:

After the summer transfer saga that linked Wayne Rooney to Chelsea, few would have thought that he would find this kind of form so early in the season for United. The striker has been absolutely superb in his last couple of outings, scoring thrice and joining the 200-goal club for The Red Devils. His record against Manchester City is outstanding, having scored 10 goals against them in all competitions, 7 of them coming in the league. The rejuvenated Rooney holds the key to victory for United, along with his strike partner Robin Van Persie.

3) The Problem of Plenty up Front for Pellegrini:

Manuel Pellegrini faces a huge selection dilemma as to whom to play in City’s forward line. Sergio Aguero has been below-par thus far, while Edin Dzeko has shown sparks, only on an inconsistent basis. Aguero and Dzeko have started majority of the games so far, but the combination hasn’t worked as the manager wants it to. New signings Alvaro Negredo and Stevan Jovetic are still finding their way into the side. Though Negredo has already scored 2 goals in the Premier League, Pellegrini may favour experience over form for this one. Jovetic has made only one appearance thus far, and a start in the derby looks unlikely.

Apart from the last season’s tie, which ended in a thrilling 3-2 win for United, derby games at the Etihad have been cagey encounters. There have been times when managers have set up not to lose, rather than to win. If this game shapes up like that, then the central midfielders will be vital for both sides. Marouane Fellaini and Michael Carrick versus Fernandinho and Yaya Toure promises to be an epic battle, and the winners of the duels may well go on to inspire a victory for their sides.

5) Valencia vs Kolarov and Navas vs Evra:

A lot of the creativity and penetration for both sides has come from their right flank. Antonio Valencia has been brilliant for United, while new signing Jesus Navas has been a breath fresh air for City, combining with Pablo Zabaleta on the win with deadly effect.

With Gael Clichy out, Aleksandr Kolarov will play left-back for City and there have been question marks over his defensive side of the game in the past. His United counterpart Patrice Evra though, has been quite steady after a loss in form at the start of last season, but he has to be at the top of his game to contain Navas and Zabaleta.

The Manchester Derby promises to be a thrilling encounter, with several plots and sub-plots. Last season’s fixture saw Robin Van Persie score a last-minute free-kick to gain all three points for United on his debut in the fixture. The goal celebration sparked uproar among the home fans, and Rio Ferdinand was left nursing a bloody eye after being hit by a coin thrown from the crowd. Pellegrini’s men did go on to beat United at Old Trafford later in the season but it was all in vain as Sir Alex Ferguson’s men won the title comfortably.

Apart from the controversy and bitterness, what we also hope for is a brilliant football match. This is afterall, no ordinary fixture. This is the Manchester Derby.