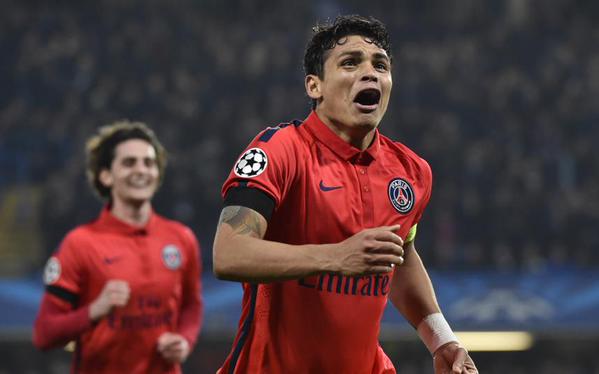 Chelsea and the Premier League were stunned last night as 10-man Paris Saint-Germain eliminated the English league leaders on away goals at Stamford Bridge.

Despite the ridiculous sending off of Zlatan Ibrahimović after only 30 minutes, the defending French Ligue 1 champions fought back twice from behind to reach the quarter-finals of this season’s UEFA Champions League.

Here are five key points from the two legs:

The Chelsea manager usually has a lot to say before games and one of the points he brought up in the media this week was Paris Saint-Germain’s ‘aggressive’ behaviour.

Whether it was that comment or Oscar’s playacting, or the face that the other nine Chelsea outfield players surround Björn Kuipers instantly after Zlatan Ibrahimović’s innocuous challenge, the Dutch referee produced a red card.

Everyone is expecting that to be overturned, but it could have, and probably should have led to Paris Saint-Germain’s exit from the Champions League, and we’d be hailing Mourinho as a genius once again…

José Mourinho’s defensive tactics at the Parc des Princes three weeks ago saw his side come away with a respectful 1-1 draw. During that game in France his side barely had a shot on target other than the goal they scored.

There weren’t too many differences in the second leg at Stamford Bridge either – Paris Saint-Germain, even when they were with 10 men for 90 minutes, took the game to Chelsea.

The days of Mourinho’s side being able to hang onto 1-0 leads appear to be slipping away – this was not the first occasion they’d let slip of a late lead this season. Both Manchester City and Manchester United have earned late draws against the Blues in the Premier League this season.

Ligue 1, or At Least Paris Saint-Germain Can Compete with the Best

AS Monaco have a healthy 3-1 lead going into their second leg versus Arsenal next week and Paris Saint-Germain have eliminated the Premier League’s top club – is the French league underrated then?

The UEFA Coefficient actually had Ligue 1 down in sixth position, below the Portuguese Primeira Liga. Many of claimed the league is far short of the elite four, even claiming Zlatan Ibrahimović is ‘too good’ for France.

PSG are in a tight battle with Lyon and Marseille this season for the league title and could be joined by Monaco in the last eight of Europe’s elite club competition – that’s more than the Premier League will have to say should Arsenal not overturn a big deficient in Monaco next week.

Diego Costa Not Producing in 2015

Chelsea’s £32 million summer signing started the Premier League season like a house on fire – tap-ins versus the likes of Burnley and Leicester City as he scored a staggering seven Premier League goals in his first four games.

It’s 10 in his next 17 since then, which whilst is still impressive even as the sole striker for the Premier League’s second-highest scorers, his form has dipped in recent weeks. Five of those 10 even game in two games versus Swansea City.

Diego Costa has now scored only one goal in his last seven games in all competitions for the Blues and failed to score in all seven games he played in this season’s Champions League. Even Mario Balotelli and Rickie Lambert managed one each…

It’s been a saying in England for many a year that great players don’t make great managers. If Pepe Guardiola hasn’t quietened the English journalists over recent years, Laurent Blanc is joining the Bayern Munich head coach in his cause.

Blanc captained France to World Cup success in 1998, won 97 caps for his national team, played for the likes of Barcelona, Internazionale and Manchester United – not a bad player eh?

The PSG manager learned from his mistakes in losing to Chelsea in last season’s Champions League and masterminded their victory over the Blues this time around. He outsmarted José Mourinho… putting him within five games of doing what only one French club has ever done before… win the Champions League.