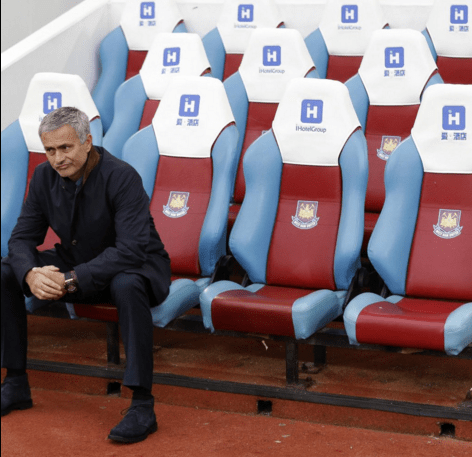 Chelsea’s decline this year has undoubtedly been the most shocking story to come out of the 2015/16 campaign. Saturday’s 2-1 loss to West Ham United compounded the Blues’ misery, as they had midfielder Nemanja Matic and manager Jose Mourinho both sent off. This has gone far beyond a crisis now, and can be considered a downright disaster. The firepower in the big names makes it difficult to believe that they won’t be back, but we’ve been waiting for that for weeks now. It is highly unlikely that a group of uninspired and listless-looking individuals can suddenly turn it around in the matter of weeks. The top 4 looks a highly improbable goal already.

With Chelsea’s past record with managers, it is quite incredible how Mourinho still has his job. Reputation and past records can only save him upto a certain limit. In this article, I play the devils’a advocate (as far as the Chelsea fans are concerned) and look at why it’s time for the Portuguese and the Blues to part ways.

1) Is he really the man to turn this around?

This seems a really silly question at first. With 8 domestic league titles and 2 Champions Leagues to his name in just more than a decade, of course he’s still the right man. But think about this. The level of performance among the Chelsea players has dropped to such abysmal levels that they are just 3 places above the relegation zone. This is a squad that has some of the most experienced and quality players in the world, and there is simply no excuse for them to be in the bottom half.

While a lot of the blame has to be accepted by the players, the manager has to be the one to shoulder the major responsibility. Complacency from last season has crept in, and Mourinho has still not been able to lift his players out of their lull. It’s gone for too long now, and while Chelsea’s performances in the last couple of games have been slightly better, the results don’t look like improving at all.

Players like Cesc Fabregas, Eden Hazard, Diego Costa, Oscar and John Terry have been downright awful this season. Mourinho isn’t directly at fault for that, but afterall, he is the manager and should be making sure that his players are motivated. 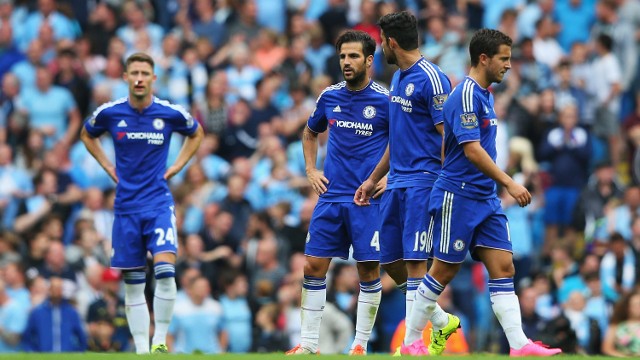 While the Portuguese’s 7-minute rant after Chelsea’s 3-1 against Southampton at the start of October was entertaining, it didn’t really have much substance. He moaned about a penalty that wasn’t when his side were well-beaten on the night. He then appeared to issue a challenge to the board to sack him before calling himself the greatest manager ever in the club’s history. That statement may be factually true, but was hardly relevant in the context of things.

Last night, after Matic had been sent off for two bookable offences, he had a bust-up in the tunnel with the referee. There wasn’t really too much to argue, but Mourinho, as always, found something. When his team needed him the most on the sidelines, he got himself sent off, watching the second half from West Ham’s Directors’ Box.

His attitude and comments which are borderline delusional have only added fuel to the fire. His excuses haven’t got any fizz in them, and his constant attempts to shift the focus away from his players’ dismal performances are becoming all too obvious.

As I mentioned earlier, had this been any other manager, he would have been long gone. Mourinho’s reputation is keeping him in the hot seat, but if you look closely at the past, there is no real reason why his presence should be reassuring.

He has never lasted more than 3 seasons at a football club, because he hasn’t been able to solve the very issues facing him now. It’s never been as bad as this before, but dressing room bust-ups, lack of player coordination and poor results overall were part of Mourinho’s third seasons at both Real Madrid and Chelsea (in his first stint). The Portuguese always wants the spotlight to be on himself and his ego gets the better of everything and everyone else around him after a while. This is what Claude Makelele, one of his most important players at Chelsea between 2004 and 2007 had to say in his autobiography: 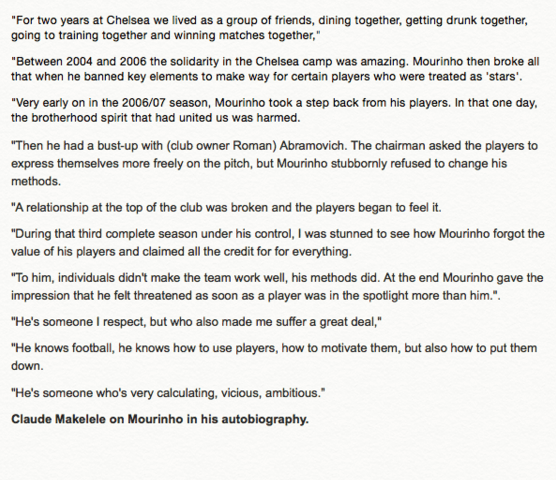 So this is a challenge he’s never been able to overcome despite his illustrious record.

There is a legitimate argument that there is nobody suitable at the moment to replace Mourinho. But the club has to assess if his presence is actually having a negative impact on the players, who don’t really look like they want to put their necks on the line to turn Chelsea’s season around.