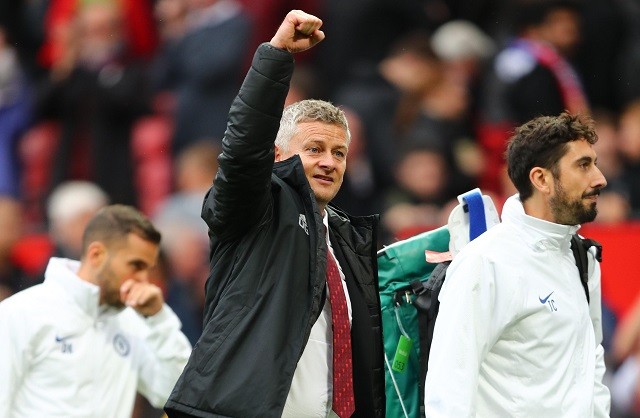 The 2019-20 Premier League season kicked off over the weekend with Liverpool beating newly-promoted Norwich City 4-1 at Anfield.

Manchester City ended the opening weekend top of the table following their 5-0 thrashing of West Ham United at the London Stadium. The defending champions have now won 15 consecutive league matches prior to hosting Tottenham Hotspur this weekend.

Whilst Pep Guardiola’s side topped the Premier League last season and are many people’s favourites to win the title again this season, they aren’t the biggest supported team from England.

Ole Gunnar Solskjaer’s side hammered Chelsea in Frank Lampard’s first game in charge on Sunday. The result left the Blues one place off the bottom, but in terms of social following, the West London club are second top. Despite having fewer Twitter followers than London rivals Arsenal, Chelsea come out on top in Facebook and Instagram in comparison to the Gunners.

Arsenal are third in the table, closely followed by 2018-19 Champions League winners Liverpool.

At the other end of the table, newly-promoted Sheffield United sit in 20th with just over half a million followers on Twitter, Facebook and Instagram combined. Along with the Blades in the relegation zone are Brighton & Hove Albion and Burnley.

The full Premier League Social Media table is as follows: 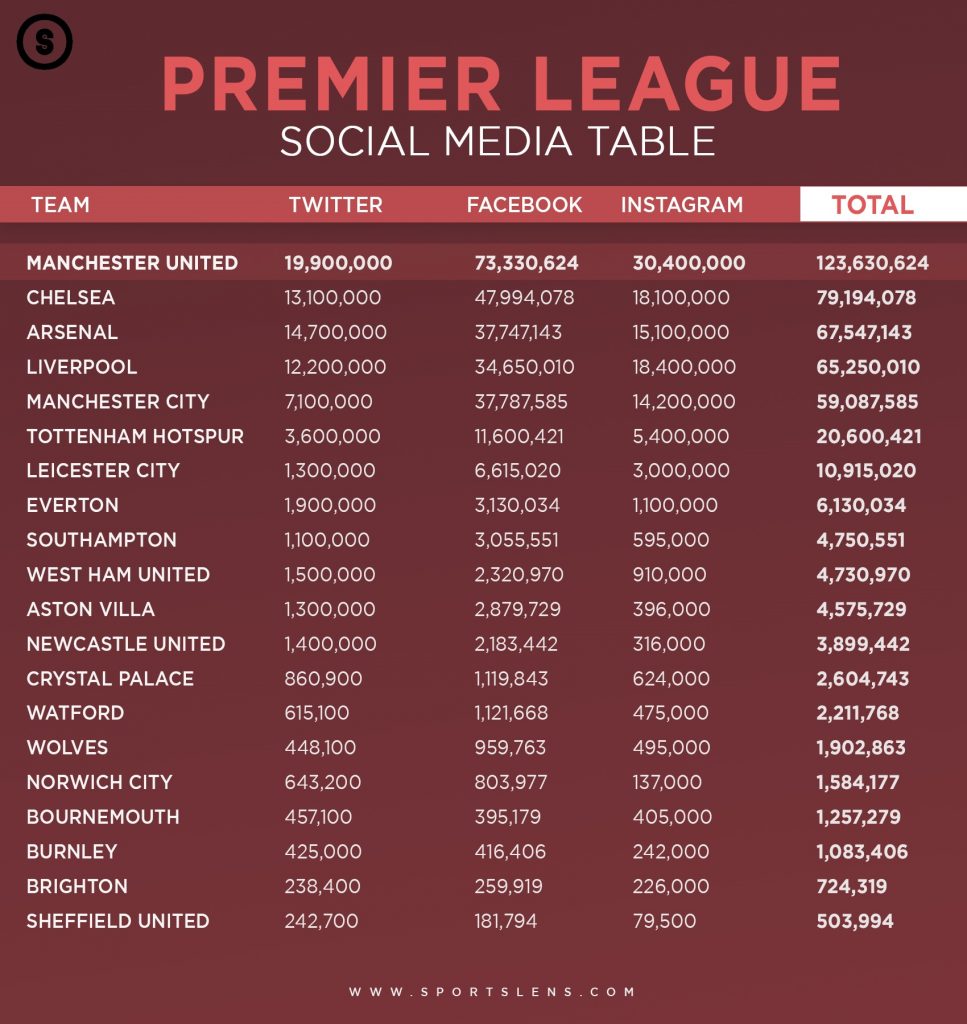 It looks as though we’re in for another thrilling season in the Championship. Two games into the season and only Sheffield United and Charlton Athletic have maximum points. 21 of the 24 clubs have already picked up points in what is usually a tight and unpredictable league.

One of the three clubs without a point so far this season is Stoke City. However, Graeme Jones’ side are the most popular club on social media in the division. The Potters have a combined 2,687,254 followers on the three social media channels we collected data for on Monday. That’s more than eight current Premier League sides.

Stoke are closely followed by Swansea City in the automatic promotion places, whilst West Bromwich Albion lead the chasing pack with more than 2 million followers. The Baggies are widely-expected to be competing at the top end of the table this season, particularly after their excellent transfer window.

Propping up the table are Luton Town with little more than 200,000 followers combined. That’s fewer than seven sides in the division below the Hatters. Joining Luton in the relegation zone are Preston North End and Barnsley.

The full Championship Social Media table is below: 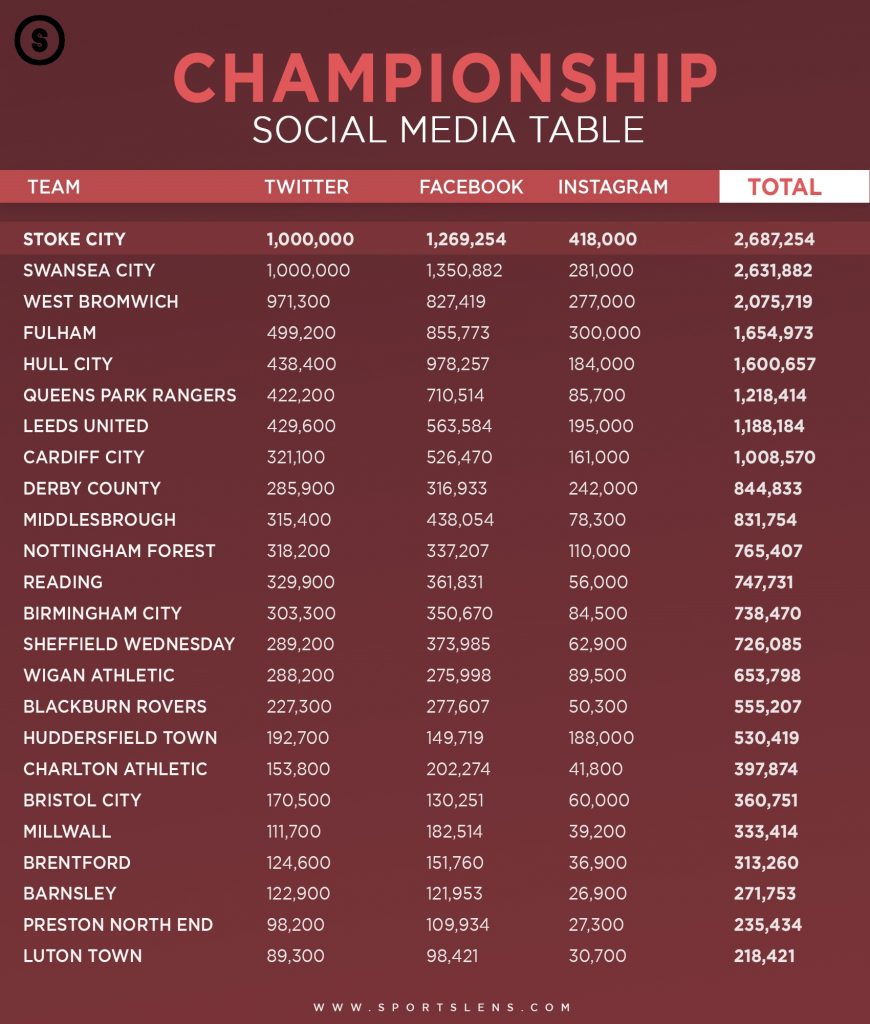 Sunderland are the runaway leaders in League One. In terms of social media followers anyway. The Black Cats are closing in on three million followers, with more than half of those being on Facebook. They have more than five times as many followers than second place Bolton Wanderers.

The Wanderers could do with monetising their social media accounts given the dire financial situation they are which sees them playing kids this season. Bolton are yet to score in their two opening games of the 2019-20 League One campaign but got a respectable 0-0 draw against Coventry City this past weekend.

Portsmouth, Ipswich Town, Blackpool and Coventry make up the playoff spots. The full League One Social Media table is as follows: 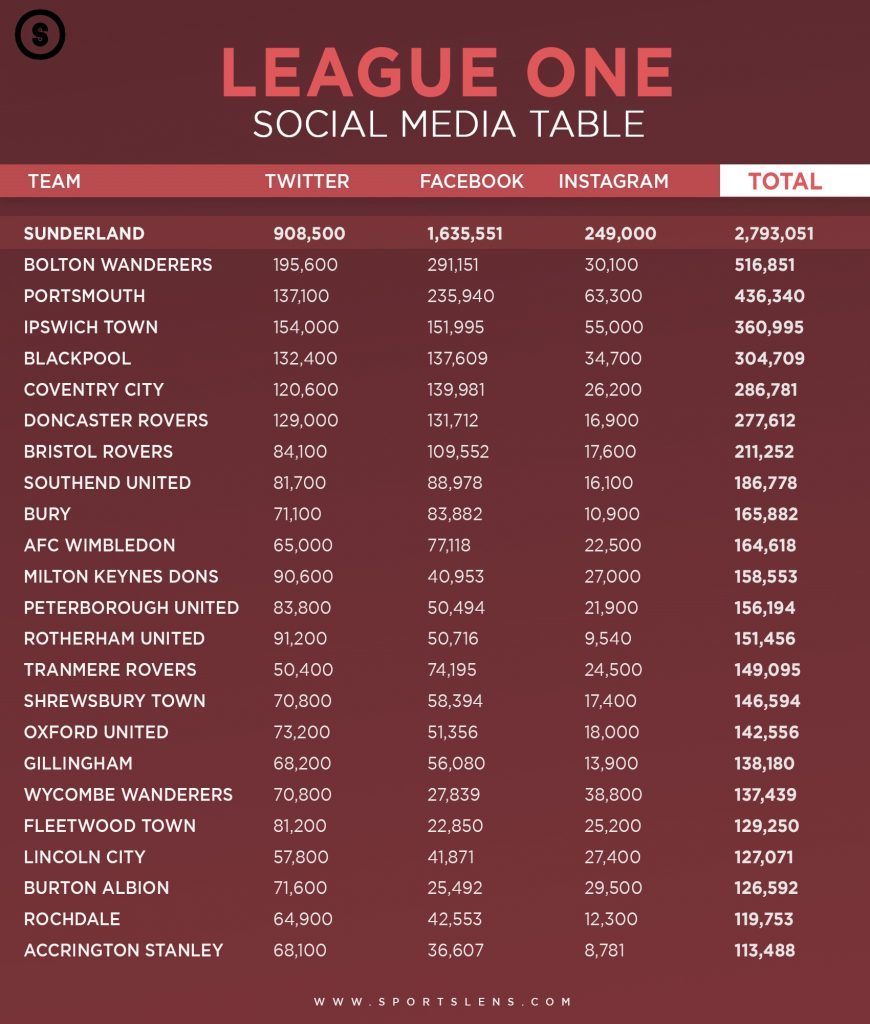 Salford City are competing in the football league for the first time in their history. The Ammies got off to a perfect start with a 2-0 victory over Stevenage in their opening fixture, but were brought back down to earth by going down by the same score at Crawley Town in their next outing.

Backed by the Class of ’92, Salford’s 371,393 social media followers is 42nd overall in England – good enough for a place in the Championship.

At the very bottom of the football league are Morecambe. The Lancashire club have just 75,192 social media followers across Twitter, Facebook and Instagram. The full League Two Social Media table is below: 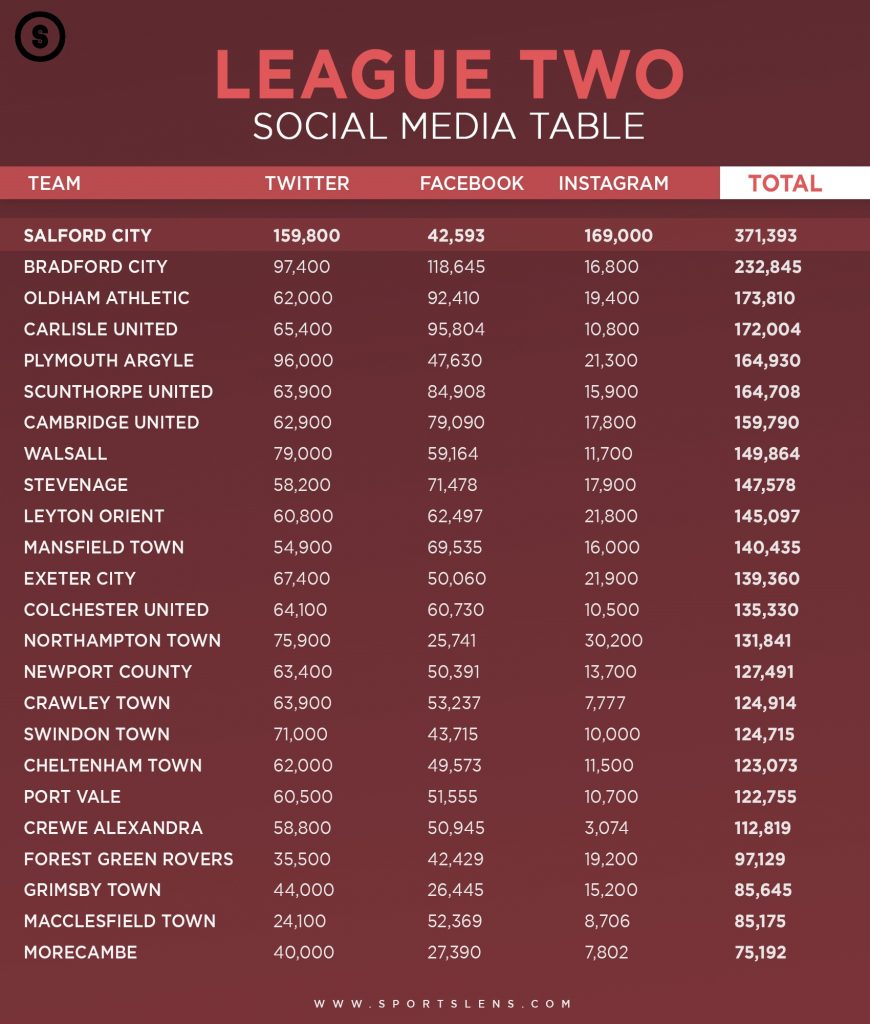