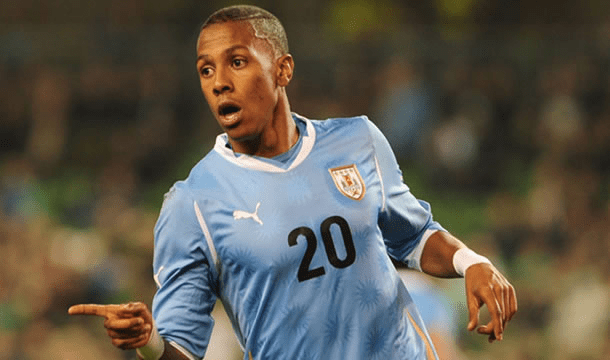 Liverpool are targeting Uruguayan forward, Abel Hernandez, according to reports from The Mirror, as Brendan Rodgers eyes Champions League qualification.

The 23-year-old striker currently plays in Serie B with Palermo, where he has been in fine form this season, netting 11 times in 17 appearances thus far.

His international record isn’t bad either and has scored 7 goals in 11 appearances for Uruguay. Liverpool manager Brendan Rodgers has stressed the importance of January transfer window, and there is a general consensus that the Reds will buy few players in winter, but probably they don’t need a striker at the moment.

Luis Suarez has been in terrific goal-scoring form, while his striker partner Daniel Sturridge was in equally good form too, before he got injured.

Italian website Tuttomercato reports that Fiorentina boss Vincenzo Montella is also interested in taking him meaning he could stay in Italian football.

Montella is also interested in Liverpool’s winger Oussama Assaidi, who is currently on-loan to Stoke City. The 25-year-old was frozen out of the first team at Liverpool last season, having made only four appearances, but has been in limelight again, thanks to some solid performances and stunning goals.

It is reported that Liverpool manager Brendan Rodgers remains in touch with the player, but whether he has a long-term future at Anfield, is still unknown.