Barcelona defender Gerard Pique has struggled to get regular games this season under new coach Luis Enrique. He has been dropped in recent matches, while has been constantly linked with a move to the Premier League.

Manchester United, his former club, is thought to be one of the interested parties, while London rivals Chelsea were also reported to be weighing up a lucrative offer for him. 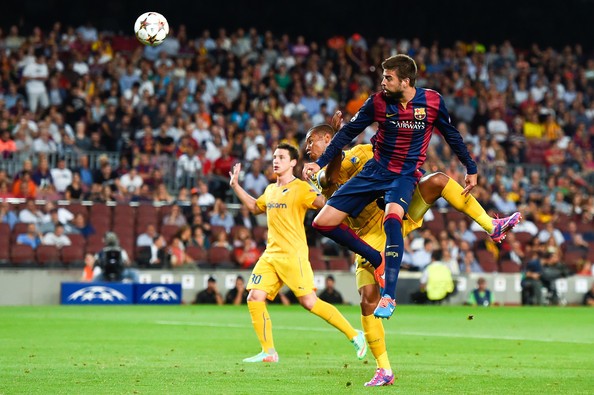 For that matter, we didn’t pay much heed to those report, as the stories were generated mainly from the British tabloids and were recycled in Spain, pouring further oil to the fire.

There are all sorts of reports in Spain; each having their own version. The Catalan press obviously trying to diffuse the situation by projecting that Pique has been dropped for tactical reasons while Madrid based newspapers report that the Spain international has been ‘punished’ to the bench by Enrique for ‘indiscipline’. 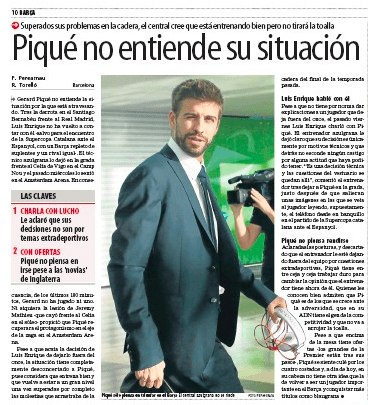 Mundo Deportivo has published a report on Pique today, where they claim the defender himself is confused with the situation he’s going through at the moment. After Barcelona’s loss to Real Madrid, he didn’t feature in any competitive match, apart from the appearance in the Supercopa Catalana against Espanyol which was a mere glorified friendly.

Even when Mathieu got injured against Celta he wasn’t brought back into the side. Pique feels that he is training well and that he’s recovered from his injury that caused problems towards the end of last season. He spoke with Enrique last Friday about his situation, where the Barcelona coach told him that he was dropped for tactical reasons. Put it simply, it wasn’t a punishment. They use a ‘quote’ saying “It’s a technical decision and the questions from the dressing room will remain there.”

This was after he was seen looking at his mobile while on the bench against Espanyol. Mundo says that Pique will have to work hard to change Enrique’s opinion. Pique’s close friends feel that the former Manchester United player has it in him a fighting spirit and that he won’t throw in the towel. He has two huge offers on the table from the Premier League and based on reports from British tabloids, we now know who those two clubs are. But for now, he isn’t thinking about leaving, just solely wants to focus on Barcelona career.

Madrid based newspapers, however, have a different take on the whole story. In fact they are convinced, Pique has been ‘punished’ by his coach. 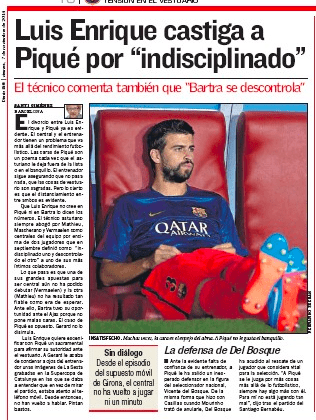 AS’s columnist, Alfredo Relano, says that he heard someone saying: ‘Pique is Luis Enrique’s Casillas’. When leaks came out from Real Madrid’s dressing room, Casillas was accused of leaking as his girlfriend works for a major TV channel. There could be leaks from the dressing room at Barca to the press as well.

They claim that Enrique doesn’t believe in either Pique or Bartra, hence their limited game time. AS also claim that Luis Enrique hasn’t spoken to Pique since the Espanyol game (when he was seen on his mobile) and basically contradicts everything published in Mundo.

Catalan press are obviously being biased towards their players and they report in a such way without tampering the image of the club. Madrid press obviously have an agenda here and they try to find more into the story, sometimes taking an ugly shape of fabrication as well, which might have happened in this case.