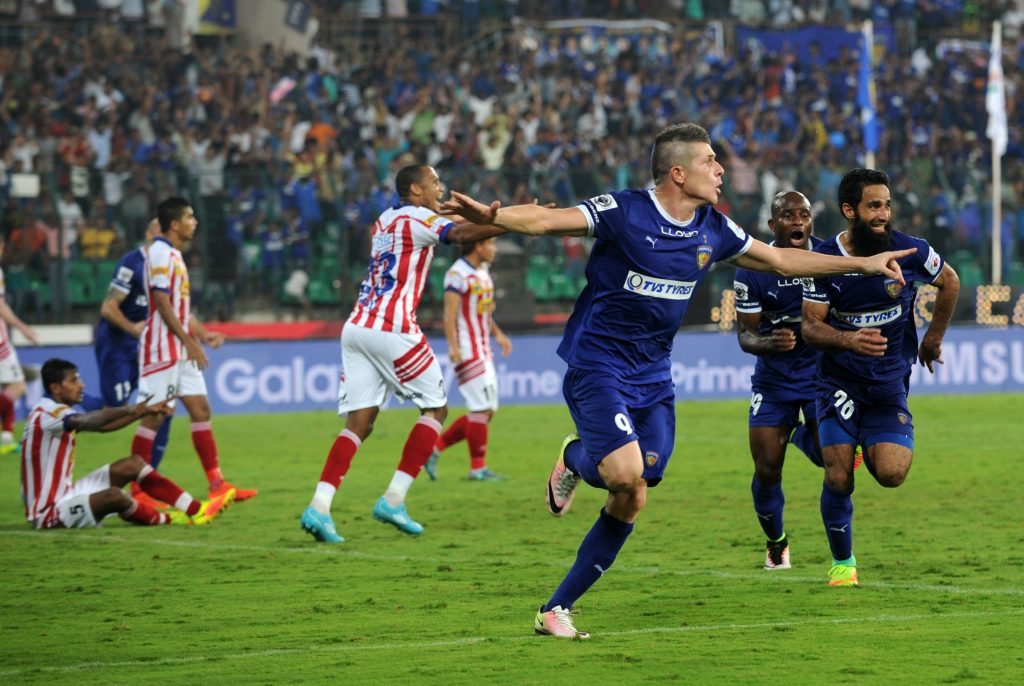 The ninth matchday of the Indian Super League kicks off tonight, and as ever, it’s packed with some exciting matches, including a couple of big ones between Chennaiyin FC and ATK Mohun Bagan, and Hyderabad FC and FC Goa. Here’s all you need to know before matchday 9:

Bengaluru suffered a defeat at the hands of ATK Mohun Bagan because of the only goal of the match.

Six matches have been played between these two teams, and every possible outcome has appeared twice each. Most recently, it was Bengaluru who prevailed in a 2-0 victory in January.

Bengaluru cannot go any higher in the table in this round, but they need to win to preserve their current position.

Jamshedpur could leapfrog Bengaluru FC with a win, and they would stay there if FC Goa drop points.

Stephen Eze – The tall Nigerian centre-back doesn’t just defend (although, he isn’t too bad at that either having kept an average of 4.8 clearances and 4.2 tackles and interceptions per match this season), as he has scored twice already this season – making him Jamshedpur FC’s second-highest goal-scorer behind Nerijus Valskis. Two of the last three goals that Bengaluru FC have conceded have been set-pieces, so the Blues will surely be troubled by the ex-Lokomotiv Plovdiv man.

Chennaiyin took the lead twice against SC East Bengal through Lallianzuala Chhangte and Rahim Ali, but they only managed to get a point out of the match.

ATKMB beat Bengaluru FC thanks to David Williams’ first goal of the season.

The old ATK had a 7-5 lead over Chennaiyin, with four other matches ending in draws. They prevailed most recently too, with a 3-1 victory in the final of the previous season.

Chennaiyin would need to win big and hope that FC Goa drop points to finish the matchday in the playoff spots.

ATKMB cannot lose a place in this round, and if they get a better result than Mumbai City, they will return to the top of the pile.

Jakub Sylvestr – Jakub Sylvestr has had a properly mixed season. The Slovakian forward has shown great link-up play, which was epitomised last time out when he bagged a brace. However, he has missed numerous great chances too, under-performing his xG by well over 3, so he will be keen to improve in that regard.

8th-placed Hyderabad FC and 6th-placed FC Goa square off in the last ISL match of 2020.

Hyderabad suffered a disappointing 0-2 defeat at the hands of Kerala Blasters.

Goa came back from a goal down to win 2-1 against Jamshedpur as Igor Angulo bagged a brace.

Goa won both of last season’s clashes with an aggregate score of 5-1.

Hyderabad have a small chance of entering the top-four if they win big and get a lot of help from elsewhere.

Goa have a much better chance of reaching the podium spots by the end of the week, as they simply need to win and pray that Bengaluru FC fail to do so.

Igor Angulo – The Spanish striker lit the league on fire in his first five appearances, scoring six times in that period. However, he slightly slumped thereafter, blanking in both the next matches. But, Angulo was back to his best against Jamshedpur FC, netting a match-winning brace complete with a last-gasp winner. Hyderabad FC have conceded six goals in their last three matches and are without a clean sheet in five, so things are looking fairly dire for them.

League-leaders Mumbai City partake in the first ISL match of 2021, as they come up against 9th-placed Kerala Blasters.

Mumbai didn’t feature in matchday 8, so their last match was the 2-0 win over Hyderabad FC thanks to a goal each from Vignesh Dakshinamurthy (quite a good one too) and Adam le Fondre.

Kerala got their first win of the season as Abdul Nediyodath and Jordan Murray got a goal each against Hyderabad FC.

Mumbai have a 4-2 advantage in the 12 clashes between these two teams, but the most common result has been a draw, which has a historic probability of 50%. The Islanders are also unbeaten in their last four matches against the Blasters.

Mumbai need to match ATK Mohun Bagan’s result to stay at the summit of the standings.

Kerala need to draw at least to secure their position for one more week.

Jeakson Thounaojam – Juande is set to join Kerala Blasters in the summer transfer window, but he might face some stiff resistance in his efforts to start from Jeakson Thounaojam, who will be undroppable if he keeps performing like he did against Hyderabad FC. The 19-year-old midfielder was simply brilliant, as he linked his attack and defence brilliantly. Against Mumbai City, he will come against arguably the best midfield in the league comprising of Ahmed Jahouh and Rowllin Borges, so this will surely be his biggest challenge.

The final clash of the week is quite a big one at the wrong end of the table, as 10th-placed SC East Bengal and bottom-club Odisha FC battle it out.

Odisha settled for a 2-2 draw against NorthEast United as Diego Maurício and Cole Alexander got on the scoresheet.

This will be the first-ever meeting between these two sides

East Bengal have a minuscule chance of reaching 9th place if they win big and Kerala Blasters lose.

Odisha need to win to get off the foot of the table.

Matti Steinmann – The German midfielder isn’t exactly an inspired goalscorer, but he scored a brilliant brace last time out as he rescued a point for his side. To add to that, the ex-Hamburg man was dominant in the middle of the park, an area where he has excelled match-after-match. Against Odisha, he will go up against the likes of Cole Alexander and Gaurav Bora, and his success in that battle may well determine his team’s fate.