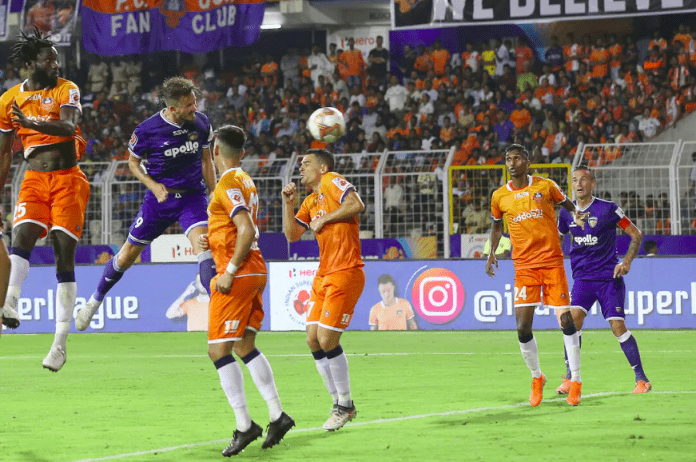 We’re 30 games into the Indian Super League’s 2020/21 season, and the action keeps coming thick and fast with the seventh matchday. This week, we’ll be treated to a big clash between FC Goa and Chennaiyin FC, while low-lying Kerala Blasters and SC East Bengal will also do battle. Here’s all you need to know before matchday 7 kicks off:

Odisha didn’t participate in matchday 5, and their last match was a 0-1 loss to FC Goa.

Bengaluru breezed past Kerala Blasters in a 4-2 victory as Cleiton Silva, Erik Paartalu, Dimas Delgado and Sunil Chetri got the goals.

Bengaluru won both of last season’s matches with an aggregate score of 4-0.

Odisha are still looking for their first win of the season, which would see them move up to 9th if Kerala Blasters drop points.

Bengaluru need to win and hope that NorthEast United drop points to enter the podium positions.

Kristian Opseth – Kristian Opseth’s start to life in India wasn’t great – he never lasted more than a half in his first four appearances and failed to hit the back of the net. While he is still without goals, the Norwegian striker looked much better last time out against Kerala Blasters as he worked hard, got into good positions, won a penalty and nearly scored when his shot took a slight deflection off Erik Paartalu before going in. All that’s left now is a goal, and Odisha’s leaky defence could well give him a few chances.

3rd-placed NorthEast United have a tough task on their hands, as they will be up against a resurgent 7th-placed Jamshedpur FC.

NorthEast played out a goalless draw against Chennaiyin FC.

Jamshedpur fought valiantly to earn a 1-1 draw against Mumbai City after Nerijus Valskis opened the scoring.

Jamshedpur have managed to win one of the six matches between these two sides, but all others have been drawn, including the last four.

NorthEast could finish the matchday at the top of the table if they win by a couple of goals and ATK Mohun Bagan lose their match.

Jamshedpur could actually leapfrog their opponents if they win by a couple of goals, but they would also need Bengaluru FC, Hyderabad FC and FC Goa to drop points if they are to stay there.

Khassa Camara – The defensive midfielder has undoubtedly been one of NorthEast United’s unsung heroes this season. The Mauritanian international has been mopping things up for his side for six matches on the trot now, and he’s one of the major factors for their solid defensive record. Jamshedpur will need to find a way past him if Nerijus Valskis is going to get any service.

Chennaiyin failed to trouble the scoreline in a draw against NorthEast United.

Goa have a 10-7 lead over their opponents in the head-to-head charts, as only one match between these two teams has failed to find a winner. Most recently, however, it was Chennaiyin who were the happier side as they advanced to the finals last season with a 6-5 aggregate victory.

Goa could climb to third with a win, but they would need a few other results to favour them so a top-four spot should be good enough.

Chennaiyin can displace their rivals if they win and Jamshedpur FC drop points too.

Jorge Ortiz – After getting his first ISL goal against Kerala Blasters and impressing thoroughly against Odisha FC, Jorge Ortiz found himself on the bench for the match against ATK Mohun Bagan. His presence was evidently missed, as Goa failed to get at their opponents’ defence and couldn’t really threaten the keeper. After he came on, the Gaurs looked bright once again and created many chances, but failed to make them count. The Spaniard will be looking to rectify that against Chennaiyin FC.

Hyderabad looked brilliant again as they overcame SC East Bengal’s challenge in a 3-2 victory thanks to goals from Aridane Santana and Halicharan Narzary.

Mumbai had to make do with a 1-1 draw against Jamshedpur FC as Bartholomew Ogbeche equalised.

Mumabi beat Hyderabad once last season, while the other match ended in a 1-1 draw.

Hyderabad could finish the weekend in 3rd place if both Bengaluru FC and NorthEast United drop points and they win, which would be quite a result.

Mumbai only need a point to spend another week at the summit of the standings since ATK Mohun Bagan are not in action.

Liston Colaco – Aridane Santana is Hyderabad FC’s top-scorer with four goals, but arguably he isn’t their most important player. That title must go to Liston Colaco, who has simply been brilliant so far this season, impressing thoroughly in his four appearances this season, which ave earned him an average rating of 7.5 from us. Last time out, he came on at half-time and changed the match by getting two brilliant assists to give his side a commanding lead. Mumbai are without a clean sheet in their last two games, and they better find a way to keep Liston Colaco in check. if they are to end that run.

Kerala succumbed to a 2-4 defeat against Bengaluru despite goals from Rahul K.P. and Jordan Murray.

East Bengal succumbed to a 2-3 defeat at the hands of Hyderabad FC even though Jacques Maghoma bagged a brace.

This will be the first-ever meeting between these two sides.

Kerala have a tiny chance of moving one spot up with a big one coupled with a defeat for Chennaiyin FC.

East Bengal could finish the week in 9th place if they win and Odisha FC fail to do so.

Jacques Maghoma – It’s been a turbulent season for East Bengal so far, but one man who has finally managed to get up and running is Jacques Maghoma. The Congolese forward scored his side’s goals in their loss against Hyderabad FC, becoming the first-ever scorer for East Bengal in the ISL. This time, he’ll want to get a substantial result along with some goals.