The list of Newcastle United forwards that have donned that famous No. 9 shirt down the years is a pretty formidable one.

The exploits of club legends such as Jackie Milburn, Malcolm ‘Supermac’ Macdonald, Andrew Cole, Les Ferdinand and Alan Shearer have all served to weight that particular squad number with such significance that it becomes increasingly obvious as to why so many eyebrows were knowingly arched when a precocious, often volatile, 21-year-old in the lengthy shape of Andy Carroll was entrusted with the continuation of the mantle.

In what is for all intents and purposes his first full Premier League season, Carroll has already set about proving his worth from the get-go.

A sprightly performance in a tough opening fixture against Manchester United and a dominant three-goal display in Newcastle’s 6-0 dismantling of Aston Villa yesterday have already got some of the more twitchy members of the footballing media crying for the rangy striker to be elevated into the full England squad – and I have to confess that I am one of them.

However, my opinion isn’t quite as knee-jerk as I suspect many of my better-paid, better-qualified, better-connected contemporaries’ are, and is more rooted in my inherent loathing of the current national side than it is in any particular fondness for Carroll.

Owing to an unfortunate choice in club loyalties, I get to watch a fair amount of Championship football and to say that Newcastle were by far and away the best footballing side in the division last season is actually doing them a bit of a dis-service. 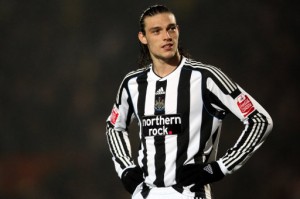 Carroll in the Championship last season

Due to being relegated from the top tier the year previous and the resultant departure of a fair old quota of their overpaid deadwood, Newcastle were finally ready to gift local lad Carroll his chance in the first team last season – a decision that was duly repaid with an impressive 19-goal haul along with a string of man-of-the-match performances.

Newcastle were promoted back to the Premier League as champions with games to spare, but the lull between domestic seasons doesn’t seemed to have dimmed the collective spirit that built within the camp so readily during their victorious run to last season’s Championship title – case in point being their rampant performance against a beleaguered Villa side yesterday.

Carroll seemed to embody that resurgent rush caused by the overdue return of top flight football to St. James Park, capping what was already a fine individual display of target-mannery with a hat-trick of smartly taken left-footed goals in front of England manager Fabio Capello’s erstwhile assistant Franco Baldini.

Shearer himself (who is, incidentally, Carroll’s childhood hero) offered a glowing reference after the game, praising the striker’s ‘guts’ in seemingly being able to handle the expectation and responsibility that comes with sporting that famous No. 9 on your back on Tyneside – and references don’t come much more highly-prized than that in that specific part of the world. 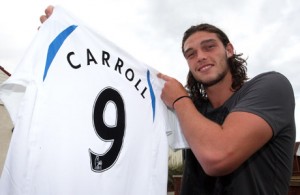 Carroll holds his No. 9 jersey aloft

Carroll is tall, powerful in the air, deceptively quick across the ground and no worse-a-player than say Bobby Zamora (who was recently called up for England’s recent friendly against Hungary after months of similar debate) or Peter Crouch (who still seems to be on the periphery of Capello’s thinking) and is considerably younger and therefore more malleable than either.

It was the five or six seasons of abject mediocrity under his belt that constantly cast doubts on Zamora’s ability to make the step up to international level, and the fact that Crouch only seems to flourish against countries with GDPs lower than his weekly wage has long been an issue with his various detractors.

Neither of these issues exist with Carroll because he is currently unproven, which is precisely the reason he (and so many of his young, emergent cohorts) should be given his opportunity at England level i.e, he has yet to prove that he is just another lumpen, uninterested, insular, self-obsessed, sloth, the likes of which currently litter the national set-up.

Given the dearth of alternative ‘fresh’ options in the ‘big man’ role, and the continually wavering performances of those who have already been given a shot – surely Andy Carroll deserves a chance as much as the next man?

And just who is the next man anyway?