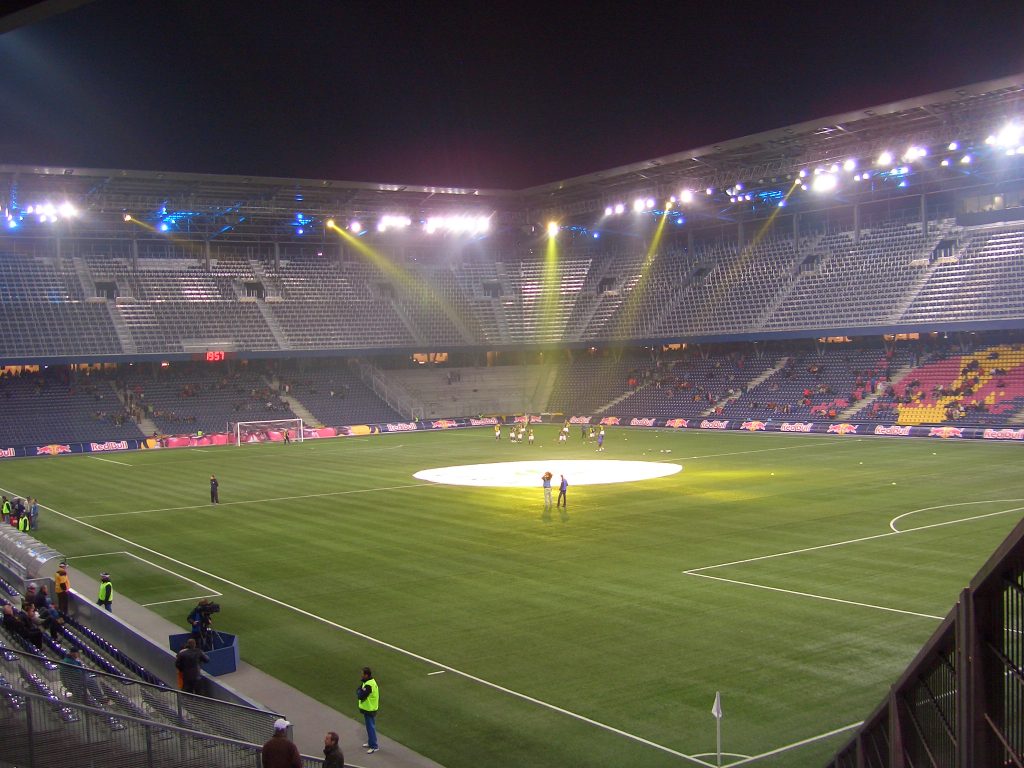 Is football the new religion?  Are football stadiums the cathedrals for the new common man? Two questions that people have asked for years.  But what truth is there in an answer of “Yes”?  Based on the explosion of commercialisation of the game I would suggest that some football clubs have a cult-like approach to fan engagement.  Get them in as young as possible, ram our product down their throats as often as we can and then brainwash them to come and spend ridiculous sums of money on things like branded toasters, branded bottles of water and even branded vodka.  There is certainly no end to what a football club will slap an advert on these days for cash.  Apart from renaming the actual club as you can find all through the Austrian Bundelisga (Red Bull Salzburg anyone? or are you simply looking for a Cashpoint in Altach), the biggest billboard a club has to offer is their ground.  Stadium naming rights are big business these days.  In Germany it is the norm to sell the naming rights on a regular basis but elsewhere in Europe where many grounds are not owned by the clubs, but by local authorities it is not common. The situation in England is confused to say the least. If you look at the twenty biggest stadiums in England, only three are sponsored.  The Emirates, The Ricoh Arena and The Walkers Stadium in Leicester.  Interestingly there are a couple of other stadiums in the list that used to be “named” but have now dropped the convention.  Middlesborough’s The Riverside started off life as the Cellnet and then the BT Cellnet stadium before reverting back to its proper name in 2003.  Southampton’s St Mary’s Stadium was originally known as the Friends Provident St Mary’s Stadium, quite a mouthful before they withdrew their support in 2006. Oh, and who can forget the ridiculous situation at Newcastle United when St James’ Park was renamed the SportsDirect@St.James’ Park or something else ridiculous for a period of time.

Stadium rebranding his hardly the religious approach akin to the “cathedrals for the common man” is it?  For whose purpose is the naming of a stadium?  The players?  Will the team be more likely to turn performances up by 10% if they have a new name above their heads. The fans? Look at the situation in Dortmund.  Do the Borussia fans bedecked in their yellow and black say, obviously translated from our German cousins “Are you going down the Westfalonstadion today” or “Shall we head off to the Signal Iduna Park”? Last month I was at the KT Stadium.  No, not the KC Stadium, formerly the Kingston Communication Stadium in Hull, but the Keith Tuckey Stadium, Croydon.  A grand name for essentially a single small stand and a fence around the pitch.  And then of course you have the new Globe Arena.  Now experts of all European sports may think I am here referring to the largest hemispherical building in the world, located in Stockholm which is home to the national Ice Hockey team.  Oh no, I am talking about the Globe Arena in Morecambe opened in the summer of 2010, along with the B2Net Stadium in Chesterfield, which has absolutely no link back to the history of the club and its long history at Saltergate.  How about Sheffield FC? Not United or Wednesday, but Sheffield FC, the world’s oldest club.  Their traditional ground is now called the BT Local Business Stadium…hardly rolls oof the tongue and suggests heritage does it?

I have no issues with stadium naming rights as long as they are done for the right reasons.  A long term commercial partnership for instance.  You cannot have a better example than the Reebok.  It has never had a different name, and as long as Reebok are in business I doubt it ever will.  A local company who saw the synergy in their brand and Bolton Wanderers.  A perfect match.  The Walkers Stadium certainly fits into the Bolton mould of a local company and a football club working together, with Gary Lineker the glue that binds them together.  But there are few other examples.  I will hold judgement on The Emirates for a few years yet as I still cannot see the emotional value in the brands of Arsenal and a Middle Eastern airline apart from cash.  I still struggle to refer to Huddersfield Town’s ground by any other name that the McAlpine, despite the fact the naming rights passed to Galpharm in 2004.  But some clubs just see it as a chance to cash in, another part of their “inventory” to be sold off to the highest bidder. Possibly the least successful example here is the Northern Echo Darlington Arena, currently the biggest (and dare I say most expensive) ground used in Non League Football.  Built in 2003 to a capacity of 25,000 by the funds from ex-chairman George Reynolds, the club moved from its traditional town centre ground of Feethams where they averaged around 3,500 at the start of the 2003/04 season.  The stadium was originally named after the larger than life chairman, but once Reynolds filed for bankruptcy and left the club the stadium it became simply The New Stadium.  Then Williamson Motors took over the naming rights for a couple of seasons, before 96.6 TFM gave it a go until 2007.  Balfour Webnet were the next mugs before finally the Northern Echo stepped in in February 2009.  Nothing like building a brand.

At what point will a club say no to a deal? I imagine it depends on how needy the club is, or how greedy the owners are.  What if Danish chewing gum brand “Spunk” approached a club in dire financial straights?  Would they rename the ground The Spunk Arena? What about Swedish chocolate bar “Plopp”?  Short term gain for long term pain.

Of course the clubs could just sell the naming rights to individual stands.  The Success Doncaster Stand, The Westrose Leisure Stand and the Hynpos Valley Terrace really send fear into the heart of opposing players just like the Stretford End, The Kop or the The Shed used to back in the day.  But that is a story for another day. So let’s end today’s sermon with a little quiz.  Just to test your consumer acceptance of rebranding of stadiums across England, can you name the clubs that play at the following grounds:-

Answers can be found in the good Lord’s book (probably), or by clicking here.