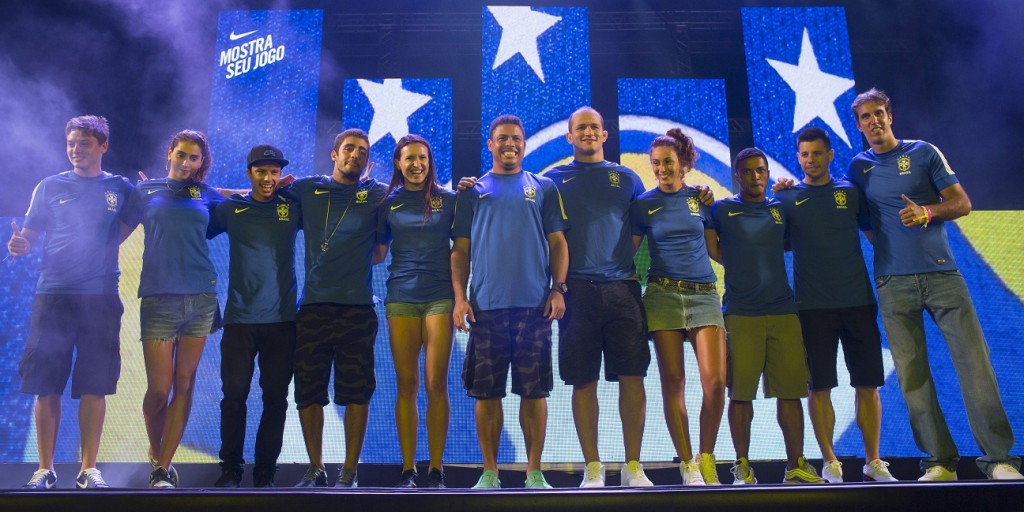 The most iconic footballer of recent times, Ronaldo, helped Nike launch the Brazil 2013 away kit. The kit was launched as part of the ‘Batalha das Quadras‘ competition (Battle iof the Court) in Rio de Janeiro.

Neymar had already launched Brazil 2013 home shirt just a day prior to this as part of the same competition mentioned above.

Ronaldo was heading the away kit launch celebrations and he was joined on stage by leading Brazilian athletes including Junior Cigano (UFC fighter), Maurren Maggi (long jumper) and Marcelo Machado (basketballer).

The Batalha das Quadras competition honours the samba football and some of the world’s great have participated in this tournament over the years – like Neymar, Ronaldinho and the big Ronaldo himself.

The new away kit is stylish and authentic representation of the country’s ability to dazzle the football world. The jersey offers a modern look while losing none of its tradition demanded of it by a passionate fan base.

The shirt is an iconic blue, a color that has long been synonymous with Brazil’s second kit. A lightweight crew neck with V-inset, a white trimmed, bonded shoulder panel, crafted ribbed cuffs, laser venting, welded seams, and hemline vents are all innovations to benefit players’ performance on pitch.

The white shorts have blue bonded side tape with venting at the sides to aid movement and an inner gusset to aid comfort. The socks are blue with a white Swoosh and “Brasil” detail.

The Brazil 2013 away kit is constructed using Nike Dri-FIT technology to wick moisture and are made out of 23 percent lighter fabric with 20 percent stronger knit structure than Nike’s previous kits.