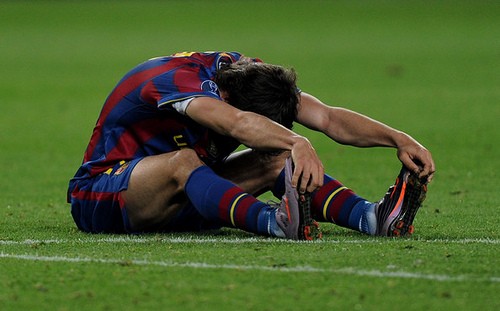 So, everyone says that Barcelona are unbeatable, or are least the untouchables. Which is twaddle.

Sure, they have lots of excellent players. (MessiXaviAlvesIniestaPiquePuyolBusquetsVillaSanchezPedroetc… say that five times fast) and they have the best player in the world, backed by a manager as ahead of the time as anyone as it stands and a style of play that suits them down to the ground, one that looks for all the world unbeatable. Luckily, it’s not. Theoretically. The reason being this simple but complicated idea – Barcelona play on the same football pitch as everyone else.

First Thing To Know: Why Barcelona Have Become Fashionable

By the way, if you have never read Jonathon Wilson’s ‘Inverting The Pyramid’ then do so – not only is it entertaining but what it shows us is that there are always certain clubs tactically that are ahead of the curve – the likes of Hungary (Creative Strikers) Inter Milan (Catenaccio in trophy winning form) for example played in such ways that, due to the lack of coverage of these sides they were generally hard to counter for years, until other clubs cottoned onto how they played, vital parts of the team were undone or the tactic that had that club going strong was undone instead (Notably, Celtic’s defeat of Milan in the European Cup Final of 1967 was to prove the end of the catenaccio as a major tactical force.)

Barcelona are one of those teams ahead of the curve, and despite the vast television coverage encapsulating most teams (especially Barcelona, considering their television deals in La Liga) teams have unable to be able to adapt, or even successfully ape the formation (A potential success story looking to be Manchester City). Yet. While it’s worth pointing out that Barcelona have some excellent players (lots of them in fact) they have been brought to a new level by the tactics imposed by Guardiola – before Barcelona’s recent run of devastating form they were very much a beatable team, stagnating in the twilight of the Rijkaard era. They had a classy squad then (Ronaldihno, Eto and Messi anyone?) and they have a classy squad now, as do many around Europe, but their tactics set them apart. Therefore with the right tactics they can be beaten. But then I bet every manager thinks that…

So, to restate what a fair few will know by now: Barcelona in their title winning form like to push Busquets back in between the centre backs while Barcelona are in possession. This allows Barcelona to easier play the ball out of the back, whilst allowing the whirlwind wing backs, Alves in particular, to bomb into the opposition half. The knock on effect of this move is to drag the opposing wingers back on either side to prevent the opposing fullback being overwhelmed – giving lots and lots of space to the Barcelona back three and the midfield to pass to their heart’s content. Like the excellent Zonal Marking diagram on the right demonstrates.

Of course what this also allows is for the front three – usually loosely stretched across the pitch – to come inside and attack the box. In fact really it’s a requirement – without the front three dragging the opposing back four inside the likes of Alves would just be charging into space already covered by the opposition.

Of course, because the strikers come inward, and the wing backs pull their opposing wingers back to the defensive line, the opposition suddenly have six defenders, two of whom aren’t actually defenders. I know that wingers nowadays do have to work hard and track back, but the situation the opposition is forced into as a result of this aggressive wing back play is ridiculous. They cannot afford to lose hold of the likes of Alves, but to keep a winger on him surrenders most of the attacking edge that wingers provide. It’s a no win situation.

You were to play five at the back instead of four.

Five at the back you see, changes everything. Against most other forms of play it has been proven to be outdated – because the three men in the centre defence are too many for a modern game in which most teams use one striker. But this isn’t an ordinary modern formation. With the wing backs pushing on and the wide strikers moving inside, a five man defence gives you a man for man defence. And it does something else too – something potentially devastating to the Barcelona game plan – it could leave, if the Barcelona wing backs aren’t careful, a winger completely free.

And suddenly, Barcelona are in trouble. If Alves is his usual bombastic self, Barcelona risk being hammered on the counter attack by the winger hanging wide (In this case Ronaldo) and attacking a suddenly very vulnerable three man defence and lets be clear here – it is better to have three attackers against three defenders then five attackers against five defenders, simply because in Madrid’s lineup say, Ronaldo, Benzema, and De Maria would find a lot more space to run at the opposition defence, decide what moves to execute and play them out. If Alves were to hang back on Ronaldo, then Barcelona lost an attacking threat and give Madrid an extra man to play with at the back, not to mention the overload when Madrid gain possession on both sides of the pitch. For all it’s negative connotations, playing five defenders against Barcelona is certainly a better idea then a four man defence with two extra unwilling volunteers.

But What About The Pressing?

Yes, Barcelona press, hard. To be fair, the fact that they press so heavily is almost more Barcelona getting with the times then the team doing something intensely revolutionary – pressing has been a part of the modern game for years. But under Rijkaard Barcelona were poor off the ball, and even their being intensely sensational on the ball (With an endlessly creative Ronaldihno on the wings) could only work so much. Coming back to now then, Barcelona have caught up and zoomed past the times – they play a very, very aggressive passing game which seeks to win the ball in the opposition final third. So you can find your defenders being overwhelmed by furious Barcelona assault even when the Catalan’s don’t have the ball.

Well for a start the free wingers (or wing backs, depending on who the Barcelona wing back wants to mark) are a useful direct outlet

from Barcelona’s pressing, allowing said team to immediately spring away on the counter attack. But the overall general idea would be to use Barcelona’s pressing against them. If the opposition were to play keep ball, attempting to make Barcelona chase then Barcelona are going to be burning a lot of stamina simply winning the ball back – something that can count against them in the late game.

Simply, it would be hard, but with out balls and composure (not be mention at times sheer defensive will) an opposition team can probably make Barcelona tire quicker. This in fact ties in nicely to solving the tika-taka style Barcelona also play – where Barcelona press ferociously, a team pressing slower but maintaining a solid defensive shape and making their tackles can take a stamina advantage into the late game – opening more space to threaten Barcelona’s back line.

So everything we’ve talked about so far has been based around neutering Barcelona’s general tactics and exposing their flaws – ignoring the general quality of their players which, I’ll be honest, there isn’t too much you can do about other then also be a good team. That’s going to be the same with many David and Goliath matches – tactics cannot account for all the sheer quality out there in the top teams because man for man, they have  the edge. But still, it being a ‘beating Barcelona’ guide it wouldn’t be nearly complete enough without tackling the big elephant in the room, or rather, the diminutive one.

Say what you like about Barcelona’s quality – Messi binds it all, and has done ever since Pep Guardiola arrived in the management job he occupies now. He is the fulcrum – he is a class above whatever parameters any football expert defines as ‘world class’, and in my opinion he is the greatest footballer to ever play the game, already.

So then, how to stop him. Because unlike any other side Messi changes everything. One on one, he can beat anyone in the world, so leaving the side as 3v3 in the centre isn’t going to cut it. Enter the need for those fullbacks you have to tuck in on the defensive – potentially allowing the wing backs that space on the flanks we were trying to nullify earlier, but on the bright side we still have two wingers free, ready to spring the counter.

Another reason we need the fullbacks to remain grounded, rather then say, moving to track Alves, is because one of the defenders is going to be following Messi. In this case, Pepe, the dark side of football. He will use his physicality and tough tackling against Messi’s dribbling skill, but the ultimate hope of such a move is simply that Messi sees much less of the ball, or sees it in less harmful positions. What this does then, is leave two defenders against two attackers in the centre of the defence, so Barcelona’s opposition would have to tuck in the fullbacks in order to maintain stability at the back.

To paraphrase from Inverting The Pyramid ‘if you want to stop someone eating at a resteraunt, you stop the food coming out of the kitchen’. Messi can do just about anything with the ball, but the more you can starve Messi of the ball, the more he will go looking for it, and the less a threat he becomes. Thus having someone like Pepe tracking him, someone with the stamina and physicality would lessen his threat. And if Messi does get the better of him, he still has to get through the relatively solid back line. As solid as it can be against Messi anyway.

What you come out with is a fairly negative sounding 5-4-1, because that’s exactly what it is. Hell, really it’s more of a 5-5, which, I’m sure people can argue with plenty of justification, is a negative stance to take.

To which I would answer that any formation taken against Barcelona is going to be negative in it’s outlook. Like it or not, right now they are the best side in the world by a fair mile. They have top class players playing in top class tactical confines (using the word ‘confines’ loosely here) and regardless of what you do they are always going to be very hard to beat. Thus, teams have to be able to defend against them. Madrid, the most expensively assembled side in the world, have proven the folly of trying to out school Barcelona at what they do – but the right tactics are out there. Just as they were for catenaccio, just as they were for Hungary and Ajax and Roma and many others beside – other teams will catch on, and catch up. And for all the negativity of the 5-4-1 demonstrated here, it has the capacity to hurt Barcelona, where a four man defence robs it’s own team of it’s sting.

So, I present you a 5-4-1. It might not have the beating of Barcelona, but certainly it can expose other teams using the same tactics, and it can certainly give the charging wingback a second thought or two.