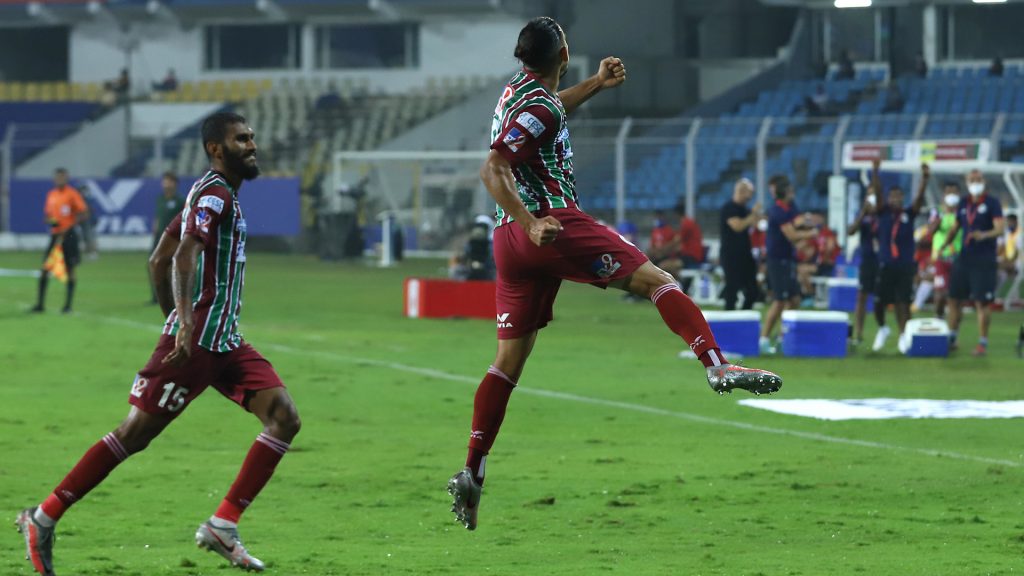 The Indian Super League’s matchday 8 got underway with an absolute cracker, as 2nd-placed ATK Mohun Bagan faced Bengaluru FC, who were just a spot below them in the table and had the only remaining unbeaten record in the league. Both sides had won their last match, but at least one of them wasn’t going to be able to repeat that.

The stage was set for a huge match, and here’s what we made of it:

ATK Mohun Bagan looked much more expressive in this match, but it was Bengaluru who had the first notable chance about 20 minutes in when Gurpreet Singh Sandhu punted a cleared set-piece back into the box, where Erik Paartalu was lurking, but the midfielder headed straight into the arms of Arindam Bhattacharya. A couple of minutes later, Subhasish Roy drilled a ball into the box for Manvir Singh, whose first-time effort was easily held by the keeper.

The home side finally opened the scoring in the 33rd minute as David Williams controlled Carl McHugh’s long ball on the left edge of the box, cut inside and away from a couple of defenders before finishing in style with a curler into the top corner.

Williams came close to doubling his tally in the 51st minute when Roy Krishna rolled the ball back to him at the edge of the box, but his first-time effort went wide on this occasion.

19 minutes later, Roy Krishna won an aerial duel and chased the ball into the box too, firing a first-time volley but missing high. Soon thereafter in the 73rd minute, Suresh Singh Wangjam found Cleiton Silva in a good position with his pullback, but the Brazilian forward failed to hit the target.

ATKMB cruised home in the end, bagging all three points after yet another 1-0.

ATK Mohun Bagan looked strong in their last match, a typical 1-0 victory over the strong FC Goa, and another similar test awaited them tonight.

Antonio López Habas surprised many with his pressing tactics last time out, and he repeated the trick with some variations this time. There was a slight tweak in formation as ATKMB went from a 4-1-4-1 to a 4-3-3, meaning that the wingers pushed further up the pitch to press. His men surprisingly looked to work with possession too, making Bengaluru chase possession for good periods of the match, especially in the first half.

Things went precisely to plan, as David Williams made their first major chance count, forcing Bengaluru FC to chase the match more intently. The Mariners created a number of openings to add to their tally, while doing well to keep their opponents at bay. In the latter stages of the second half, they were able to drop deep and defend, something that they are more accustomed to doing.

Once again, ATK Mohun Bagan have ground out a trademark 1-0 win, and they didn’t have to work too hard for it either.

After sustaining a foot injury in the final days of the pre-season, David Williams’ 2020/21 ISL campaign got off to a rather slow start.

It looks like he is pretty close to his very best now though, as he finally opened his account for the campaign after going on his longest-ever goal involvement drought, which lasted five matches. Unsurprisingly, he ended it against Bengaluru FC, a side against who he has scored four times now, accounting for half of his ISL goals. It was quite a strike too, as the winger brilliantly controlled the ball, breezed past a couple of defenders and picked out the top corner with a great strike.

David Williams has got to be the best attacker in the league… goals, skills, touch everything is there. And he runs around a lot!! #ISL #ATKMBBFC

The Australian forward took 44 touches in this matching, managing 3 shots, as many tackles, 2 crosses and 24/28 successful passes from them.

Willo’s back in the goals, and he’s returned with a bang.

Bengaluru FC have been getting progressively better since that 1-0 win over Chennaiyin FC about 17 days ago.

Tonight, however, they took a major step backwards as they looked rather clueless and failed to make anything click in the final third. The Blues clearly missed the injured Ashique Kuruniyan, whose bombarding runs up the left flank allowed Sunil Chhetri to drift inside, but the Indian forward didn’t have that luxury this time. Further, Dimas Delgado didn’t exactly shine in midfield either, cutting off the supply to the frontline.

Carles Cuadrat’s team selection might come into question too, as he left out the mightily impressive Suresh Singh Wangjam and the steadily improving Kristian Opseth for two players who disappointed with their performances – Udanta Singh and Deshorn Brown. As aforementioned, the manager didn’t seem to have a very clear plan to combat ATK Mohun Bagan’s press, seemingly resigning to defeat.

With that, Bengaluru FC lost their first match of the season, bringing an end to the last remaining undefeated record of the campaign.

ATK Mohun Bagan stay in the runners-up spot thanks to their first first-half goal of the season, but they are now level on points with Mumbai City. Meanwhile, Bengaluru FC also hold position after conceding the fourth goal from outside the box this season, with ATKMB having scored their second.