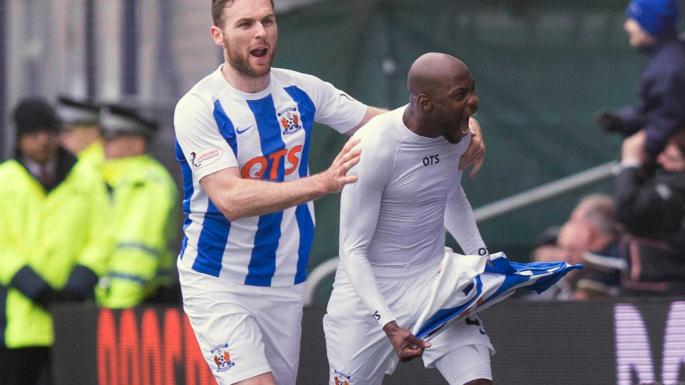 Ibrox club Glasgow Rangers and Celtic are reportedly showing an interest in Youssouf Mulumbu, and the player has said it is an honour to be linked with those clubs.

Mulumbu has been a revelation since arriving at Rugby Park in November. The Killmarnock midfielder has made a strong impact after Steve Clarke brought him last November.

The former West Bromwich Albion midfielder has put in some brilliant performances this season, and it hasn’t gone unnoticed.

According to reports from the Scottish Sun, Rangers, Celtic, Hibs and Aberdeen are all showing an interest in the player.

There hasn’t been any official contact from the Gers, and nor from the Bhoys, but the player says he is honoured and proud that his performance is being noticed by top clubs.

However, the 31-year-old is not getting carried away with wild rumours, and says that he is totally focused on taking Killi to the highest league finish possible.

“I’m not going to lie to you, it’s an honour to have my name linked with those teams but I don’t even know if it’s rumours or if it’s true,” said Mulumbu, as quoted by the Scottish Sun.

“I know that when you have some good games against the best teams in the league, Celtic or Rangers, people are going to start talking and saying ‘he’s going to go there’.

“But the best thing for me is to focus on Kilmarnock and with all the respect I have for the club I can’t be thinking about something else and some other team.

Killmarnock are fifth in the Scottish Premiership table with 49 points, 10 points behind Rangers. Celtic, meanwhile, are top of the table and are close to securing their seventh consecutive league title.