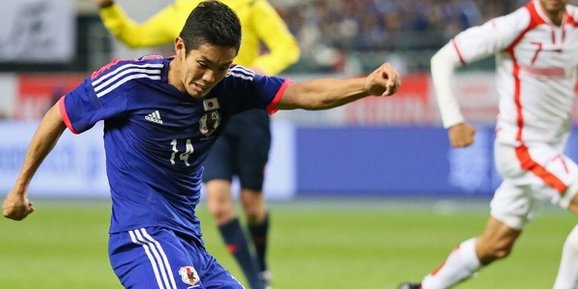 Chelsea are closing in on Japanese striker Youshinori Muto, with Jose Mourinho prepared to pay one of the highest transfer fees paid by a European club for a player from Asia. The move comes less than two months after Chelsea signed a bumper sponsorship deal with Japanese tyre firm Yokohama Rubber (at £40m / year, it’s the second biggest deal behind United’s Chevrolet sponsorship).

According to gianlucadimarzio.com, the Blues could pay around €5m for the 22-year -old striker, who seems to have only a work permit as a stumbling block before his dream move.

The report speculates that Muto could become yet another of the many Chelsea loanees at Vitesse in Holland. Muto may have the chance to impress during the summer tour, but a loan move still seems the likeliest.

The reported bid for Muto surprised a good few people, not only due to the fact that not many people had actually heard of the striker, and the fact that only six Japanese players have ever played in the Premier League – with arguably none of them finding real success.

Junichi Inamoto, Kazuyuki Toda, Hidetoshi Nakata, Ryo Miyaichi, Shinji Kagawa and (the only current player) Maya Yoshida have all given the English top flight a whirl, with none coming out unscathed.

Big things were expected of Miyaichi, who is on loan from Arsenal at FC Twente. Now, at 22, his time should be now, and he is struggling to find a game in Holland (his fifth loan spell away from the Emirates).

Youshinori Muto would be the first Japanese player to turn out for Chelsea, if the deal goes through, but regardless of team, the English Premier League is an unforgiving competition. The history books do not predict good fortune for the young striker, but then, records are always there to be broken.

Firstly, if he signs, he’s got to dislodge Diego Costa. Baptism of fire.