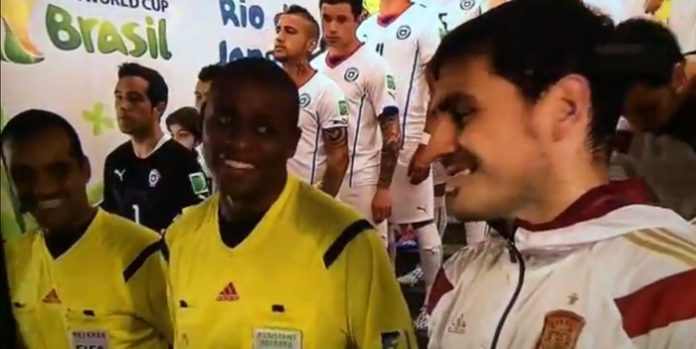 It was the stuff of nightmares for Spain against Chile last night, with the World Cup holders bowing out of the competition in the group stage after a 2-0 defeat to the whirlwind South Americans has left them with no points and stuck at the foot of the table with just one game to play.

It was indeed a strange old match, with the usually bright Spain looking laborious and unconcerned at their plight; but one fast-thinking ref brought a smile to the face of the much maligned Iker Casillas before the game, saving himself from humiliation after an awkward handshake malfunction.

Joe Fletcher, a Canadian official, was waiting in the tunnel with the players to take to the field at the start of the game yesterday, when what looks like a FIFA executive arrived on the scene, and began shaking hands with the congregation.

Starting with Spain captain Casillias, the smartly dressed exec looked to be moving to his left, and to Fletcher, who put his hand out in anticipation. To his horror, his hand was ignored, with the FIFA man going first to greet Raul Bravo, the Chile skipper.

With his hand prone and untaken, Fletcher decided to continue in a sweeping motion, onto his head, stroking back as if he had the hair of Sergio Ramos before the trim, with Casillas very amused by the situation.

His hand was then finally taken, and all forgiven, but the clip has gone viral, with Joe Fletcher becoming an overnight internet hit!

Having taken a closer look at the record of the wonderful World Cup predicting camel, it seems as if Shaheen has got the last three matches wrong, rather than the two I’d previously mentioned.

He is at a huge disadvantage however, with Shaheen not given the choice of a draw, which seems terribly unfair!

While this brings him down to two fails in a row, and therefore should be, by my words yesterday, dismissed from his duties in the World Cup Roundups, I’m giving the guy an attempt at redemption, with England v Uruguay the perfect encore for the fluffy-lipped ungulate.

Good luck, Shaheen, I for one am rooting for you – not to mention the entire English nation!

Yesterday I (and I’m sure most people) got two out of three result predictions right, with Spain’s demise a real shock to the footballing world!

Uruguay 1-1 England: Surely go to the wire, as I reckon Italy will beat Costa Rica tomorrow, meaning a draw tonight will not be the end of the road for either side.

Japan 2-0 Greece: I liked the look of Japan against the Ivory Coast, and I see them ousting this limited Greece side tonight.