Allow this newsletter, if you will, to become your South African grapevine, your go-to point for all the light-hearted news and rumour-nation that you could possibly need to see you through the upcoming World Cup safely.

You can follow this link to subscribe to this ‘ere column, therefore keeping yourself abrest of all the juiciest goings-on in South Africa this summer.

I hope you’re as excited as I am, which is fairly unlikely, as I’m frothing like a rabid dog.

Right, enough of the pleasing mental imagery, on to the useful stuff…

Just when one England man gets back up on his feet (see below), another sees his buckle underneath himself.

The word on the wire was that England captain Rio Ferdinand had been taken to hospital after suffering an injury to his knee and, sure enough,  manager Fabio Capello has just confirmed the news to be true during a press conference;

“Another piece of bad news is the last moment of the training. Rio suffered one problem at the knee.

He has just gone to the hospital for a scan. We hope that it will not be a strong injury.”

As for what has caused the injury, there was nothing out of the ordinary. It was just a normal tackle in training.”

Tottenham centre-back Michael Dawson is now on standby and may be called into the squad as an emergency replacement depending on the severity of Rio’s injury.

UPDATE: Rio has indeed been ruled out of the World Cup, and Dawson is set to fly out to South Africa as his replacement.

For further updates, you can read the BBC’s take on events here. 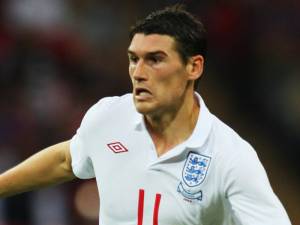 Manchester City midfielder Gareth Barry has given his England teammates a boost by coming through a fairly rigorous training session unscathed – the boost being that Michael Carrick won’t have to play in his place.

The City man has been out since sustaining ankle ligament damage against Tottenham on May 5th, but still made it into both drafts of Fabio Capello’s World Cup squad, which doesn’t really reflect well on his competition.

There’s a little more on Barry and the rest of the England squad’s arrival in South Africa here.

Arsenal manager, and genuine (say it in an Arkansas drawl for full effect) Frenchman, Arsene Wenger doesn’t seem to think Les Bleus have much of a chance in South Africa – due to their scrappy qualification campaign that infamously culminated in the ‘hand of frog’ incident during the play-off game against the Republic of Ireland.

So said the tall Gaul himself;

“The way France got to the World Cup with the handball in the play-off against Ireland could have an effect at the finals. Will it be in the minds of referees? It could be. I hope not though, because you don’t want that in football.

History has no part to play in these games, you want the ref to judge each match as it comes. So I don’t think there will be much of an effect on the refereeing side, however it could have an effect on the team’s psychological side.

If things aren’t going well they could start thinking, ‘Anyway, we don’t deserve to be here.”

You got that right.

“Is it me, or is it getting a little Chile in here?”

Chile have been lauded as many people’s dark horses for the upcoming World Cup, but they may have to do without striker Humberto Suazo – who may be forced to miss out due to a doping scandal.

The forward, known as ‘Chupete’, underwent a series of platelet injections in order to overcome an injury that threatened to rule him out of South Africa, but it has come to light that the injections may be in breach of WADA regulations.

If this is found to be the case, then Suazo could be banned for the duration of the tournament anyway.

You can read Goal’s report on the matter here.

I’ll let the man himself explain (via Winter’s twitter feed);

As the morning wore on things started to get a little more interesting;

“Baboons everywhere, grabbing bread off table. Kitchen cats hissing at them & staff seeing them off with pebbles & paint-ball gun. Score-draw.”

“Baboons just taken the lead – & the sugar, five sachets at a time, even the canderel, now sitting in trees, pouring sugar down throats. 2-1.”

Then, like a shining knight from days of yore, a pest control man turned up with some sage advice on how to scatter the horrid beasts;

“Baboons on roof now just out of range of gun-man firing small marbles. “I aim for the arse” says Mr Primate Control. Accurate up to 50 yards.”

Don’t shoot until you see the reds of their arses!

Chelsea striker Didier Drogba is in real danger of missing the World Cup after fracturing his elbow during the Ivory Coast’s World Cup warm-up game against Japan this morning.

Conspiracy theories are surfacing that the guilty party, Sao Paulo-born Japan defender Marcus Tulio Tanaka, intentionally injured the Drog with the intention of making life a little easier for the country of his birth at the World Cup (the Ivory Coast are in Brazil’s group).

“Is this the real life? Is this just fantasy?”

Consider this a friendly nudge in the direction of the Soccerlens World Cup Fantasy Football Challenge .

It makes sense, as you could end up netting yourself £1600 if you win – with cash prizes for runners-up also on the line.