Footballing boar-dog Carlos Tevez has done the decent thing and admitted that he was well aware of just how offside he was when he opened his World Cup account against Mexico t’other night, but then immediately rendered his confession redundant by adding that he doesn’t really care!

Yet another pragmatic, underwhelming victory saw the Netherlands through to the quarter-final stages as Bert Van Marwijk‘s men comfortably saw off an improved, but still vastly inferior, Slovakia side.

Arjen Robben marked his first start of the World Cup with a trademark  goal, cutting in from the right wing and firing a low shot past Jan Mucha at his near post, to give the Netherlands an 18th minute lead.

The Dutch then toiled away, offering little in the way of the ‘totaal voetbal‘ that was synonymous with Oranje World Cup side’s of yesteryear, and had to wait until the 84th minute to double their advantage.

With Mucha stranded after failing to clear his lines, Dirk Kuyt squared the ball calmly across the area for Wesley Sneijder to slot a shot through Jan Durica‘s legs and into the vacant goal.

There was still time for Slovakia to get a barely-deserved consolation, when striker Robert Vittek notched his fourth goal of the tournament from the penalty spot, with what turned out to be the last kick of the game.

After playing with such tenacity during their group ties, Chile put in a slightly disappointing display as they were unceremoniously swept aside by a Brazil side that almost effortlessly cruised past them and into the last 8.

Dunga‘s charges opened the scoring in the 34th minute with a decidedly un-Brazilian goal when centre-back Juan rose to meet Maicon‘s deep corner, thumping an emphatic header past Claudio Bravo.

The Selecao took only four minutes to further extend their advantage when, following delicate approach play by Robinho and Kaka, striker Luis Fabiano rounded Bravo to roll the ball into the empty net.

It was Robinho himself that sealed the victory for the Brazilians when, in the 59th minute, the diminutive winger stole in to curl a shot beyond Bravo after a surging run from Ramires had seen the Benfica midfielder carry the ball from the half-way line to the edge of the Chilean box.

Brazil will now face the Netherlands in the first of the World Cup quarter-final games in Port Elizabeth on Friday. 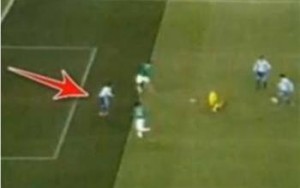 Argentina striker Carlos Tevez has admitted that he knew he was offside when he controversially nodded home his country’s opening goal against Mexico yesterday evening – and that it was ‘selfish’ for him not to own up.

Replays showed that Tevez was at least a yard offside when he touched Lionel Messi‘s goal-bound effort past Mexico ‘keeper Oscar Perez and, whereas the Manchester City striker has owned up to his misdemeanour –  he also insisted that referee Roberto Rosetti and his assistants must shoulder the majority of the blame.

“At first I thought he [Rosetti] was saying that it was not a goal, then I saw the signal and I started celebrating and I was happy.

I know I was offside, I know it was selfish, but as long as they say it was a goal it’s OK for me and the team.”

If ever there was such a thing as back-handed honesty! 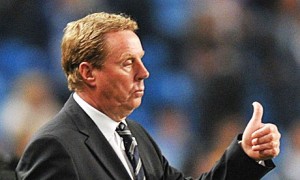 Tottenham manager Harry Redknapp has made it clear that he would be interested in taking the England manager’s job, should it suddenly become available at some point during the next couple of weeks.

“The FA have got a manager and until he’s not the manager it’s difficult to talk about it.

No one is ever going to turn that job down. If you’re English you cannot not want to manage your country.”

They’ll be El to Pais… 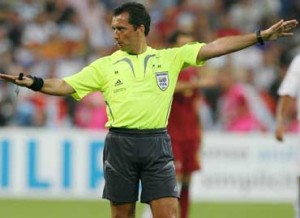 El Pais ran with the headline ‘In the name of soccer: Sorry’, and went on to urge the offending officials to do the same in a letter to the English FA.

There are no words…

“We realised after six or seven minutes that ‘no, they’re not really up to it’ and ‘we can beat them’.”

Germany striker Miroslav Klose on just how scared he and his international teammates were of Wayne Rooney and co.

England players suffered a final slap in the face after their shameful elimination from the World Cup, by having over £7,000 worth of cash, medals and (most worryingly) underwear stolen from their team hotel. (Mail)

FIFA have (yet again) confirmed that they will not be considering the introduction of goal-line technology. (F365)

Not strictly World Cup news, Barcelona have confirmed that French striker Thierry Henry will be leaving the Camp Nou this summer. Henry is now expected to move to the MLS with New York Red Bulls. (Sporting Life)

Today’s (Tues 29th June) round is as follows: