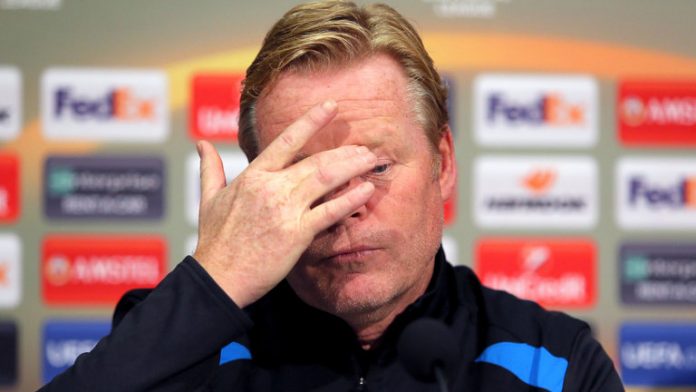 Ronald Koeman was supposed to be the one to take Everton to the next level. After years of under-achievement, the Dutchman arrived to much fanfare at Goodison Park. But, 16 months later, Koeman leaves Merseyside amidst growing negativity at the club.

Where did it go wrong for Everton and Koeman? It was always thought that Koeman was using Everton as a stepping stone to his dream – managing Barcelona. He never shied away from admitting that Barcelona is his ultimate goal although the Catalans barely gave him an audition, despite his success at Southampton.

It was perfectly fine for Southampton to lose Koeman. Due regards to the Saints, but they had a system in place and their focus has always been Academy. The Toffees, though, wanted a manager they can believe in and one who can erase the hurt of 22 trophy-less years.

Koeman did start well by leading them to seventh-place last season. Then came the summer spending of £140 million. Suddenly there was an air of anticipation around Goodison. New owner Farhad Moshiri wanted his manager to ride on the euphoria and lead them to success.

It wasn’t to be, as Koeman chose to take the easier path – of downplaying the expectations and indicating that challenging for top-four is not his priority. It was a defeatist attitude from a manager who was supposed to bring a fresh air of positivity.

That showed on the pitch, as the players looked bereft of ideas and matched the dour attitude of their manager. Tearing apart Everton’s defense was a cakewalk even for sides like Burnley and Brighton. That was far cry from the expectations that Everton will contest for top-four positions.

To say that the manager is solely responsible for Everton’s failures is to do a grave injustice to the transfer market failures of Steve Walsh. But, as it goes in Football, the buck stops with the manager and Koeman had to face the sack.

What next for Everton? Rumors that Sean Dyche could be the favorite are doing rounds although there is no quick-fix for their problems. A squad that is hugely unbalanced and an attitude that is defeatist – Everton need to give time to the next gaffer.

As for Koeman, he can bid adieu to his dreams of managing Barcelona. For most times this season, Everton lost the game even before stepping onto the pitch.