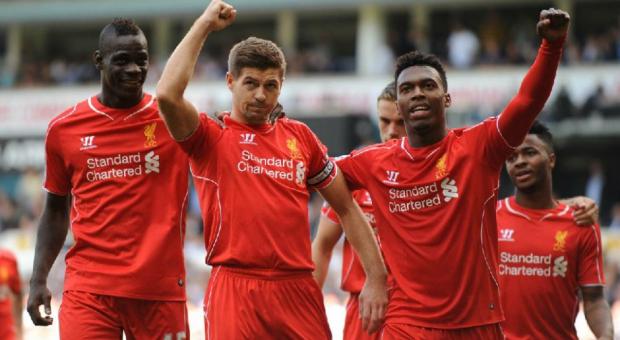 Liverpool head into the Premier League weekend off the back of a late and dramatic UEFA Champions League victory over Bulgarian champions Ludogorets.

Steven Gerrard converted a stoppage time penalty to win the game for Liverpool moments after the visitors had equalised on the break.

The Reds have been beaten twice already in the Premier League including last weekend’s surprise 1-0 loss at home to Aston Villa.

West Ham have collected all four of their points away from home having lost 1-0 to Tottenham Hotspur and 3-1 to Crystal Palace in London derbies at Upton Park.

Expect the pressure to grow on Sam Allardyce if they lose to last season’s runners-up, on Saturday.

Matt Jarvis could make a return this weekend from a thigh injury that has ruled the winger out of action for the opening four games of the season. Joey O’Brien missed last weekend’s 2-2 draw at Hull City with a knee injury but is expected to be available for Sam Allardyce’s selection.

Former-West Ham youth product Glen Johnson could return for the Reds after missing their last three games with a thigh injury. Martin Škrtel has also missed the last three games and remains a doubt for this game.

Joe Allen is out whilst Daniel Sturridge and Emre Can won’t be back for a month. 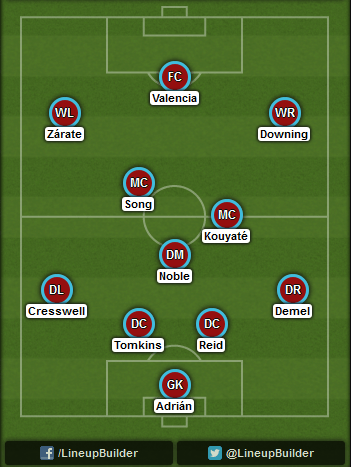 Sam Allardyce lined up with a 4-5-1 formation in both fixtures versus Liverpool last season and I think he’ll do similar again on Saturday. Albeit he consider changing his tactics as the Hammers lost 4-1 and 2-1 in those games. West Ham have done some good deals over the summer so there’s going to be no threat of relegation as long as they keep Allardyce in charge. I’m going to predict Alex Song starts his first game for the club after coming off the bench last weekend. Expecting then home side to pack the midfield to try prevent the Liverpool midfield from dominating the match. 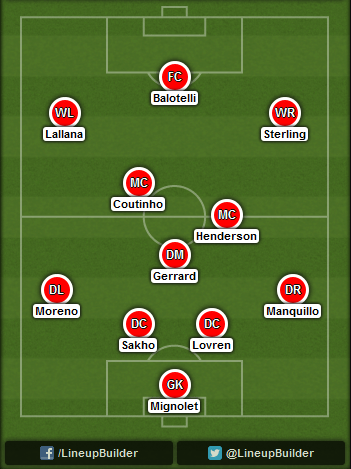 Predicting the same eleven that started on Tuesday to line up again for this one. It is Brendan Rodgers’ preferred defence with the current players that are unavailable. The midfield three are the regular starts. Adam Lallana had a poor showing in the Champions League so could potentially be dropped for Lazar Marković but otherwise it’s as you were.

Raheem Sterling vs Aaron Cresswell
West Ham’s summer signing from Ipswich Town is in for a tough test on Saturday assuming he goes up against the pacey and tricky Raheem Sterling. The England international has made a good start to the season and will look to take on the full-back often as well as cutting inside either to find a shooting opportunity or a team mate. Sterling will also drift inside.

Jordan Henderson vs Cheikhou Kouyaté
Jordan Henderson has set up two of Liverpool’s six goals this season. The central midfield creates chances for his teammates as well as winning back possession for his side. Expecting West Ham to pack the midfield this weekend success for Liverpool may come down the wings, but Henderson will be there to provide the passes out wide to his teammates and also look for space in the middle. West Ham’s tough-tackling Cheikhou Kouyaté gets stuck in several times per match and concedes more than his fair share of free kicks too.

Adam Lallana & Alberto Moreno vs Guy Demel
Assuming Adam Lallana starts down the left wing, he and left-back Alberto Moreno are a good matchup for Liverpool against West Ham. Guy Demel loves to bomb on from right-back and isn’t the greatest at winning the ball back for his team. Alberto Moreno has looked good going forward in his early days at Liverpool so don’t be surprised if he has a significant part to play in any goal. If Joey O’Brien is fit for the Hammers he could potentially start here.

Prediction: West Ham 1-2 Liverpool
Liverpool have had a few days rest since their home tie in the Champions League and won both matches versus West Ham last season. They look good on paper going forward against West Ham, albeit they have looked very poor going forward against both Aston Villa and Ludogorets over the past week. I feel as though West Ham with their new players and tactics are still settling in, hence the inconsistency and they are there to be beaten right now by a top team like Liverpool.