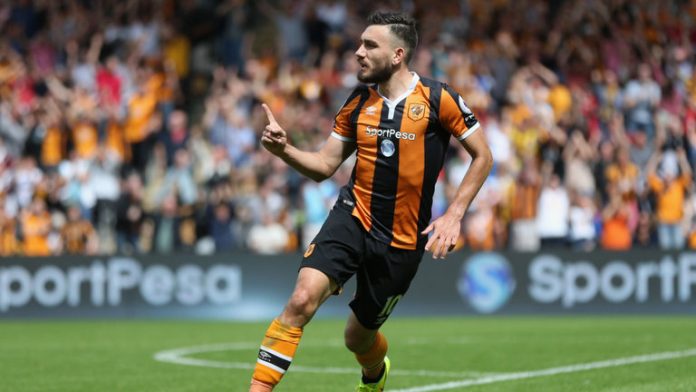 Hull City midfielder, Robert Snodgrass, is set for a medical at West Ham on Friday, ahead of his £10m move. According to reports from the Guardian, the Scotland international will discuss personal terms and he is expected to join Slaven Bilic’s side in the next few days.

Snodgrass, 29, missed Hull’s EFL Cup semi-final leg against Manchester United on Thursday due to injury. However, he is likely to pass his medical, and complete the move before the window closes.

Hull City manager, Marco Silva, has accepted that he will be without the side’s top scorer, and has started to plan for life without him. He will switch his focus now to find a replacement at the earliest. The Portuguese is reportedly targeting at least four new signings before the deadline, and wants to reinvest in the squad from the sale of Livermore and Snodgrass.

The midfielder rejected interest from Middlesbrough and Burnley earlier this month. Hull City were reluctant to allow their star player to join Boro, as they see the Riverside club as direct rivals in the battle to avoid relegation this season.

The arrival of Snodgrass could see Dimitri Payet finally leaving West Ham in January. The French midfielder has already agreed personal terms on a contract worth £100,000-a-week with Marseille, as he is looking to return to France. West Ham rejected Marseille’s latest bid of £25m plus £3m in bonuses for Payet, but it seems the Hammers would allow their star player to leave the club.

The Hammers are also looking to sign Brentford striker, Scott Hogan. The Championship side are holding out for a fee of £15m for the former Rochdale player.