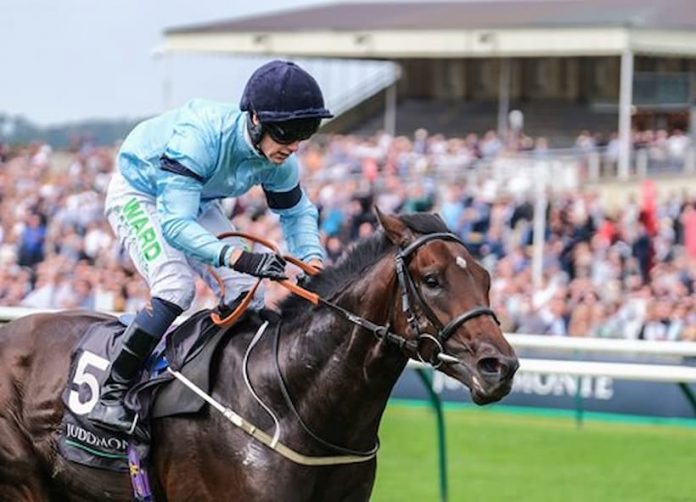 The Virginia Derby 2022 at Colonial Downs today can provide trainer H. Graham Motion with his fourth win in the Grade 3 contest as he sends leading hope Royal Patronage to post.

Motion has mopped-up the last three renewals of the Virginia Derby with Just Howard, English Bee and 12 months ago with Wootton Asset. We take a look at Royal Patronage’s chance, plus a look back at his recent races and also the main dangers ahead of the 19th running of 1m1f contest at Colonial Downs racetrack.

You can bet on the Grade 3 Virginia Derby with BOVADA and receive a 75% CRYPTO welcome bonus (up to $750) to use on the race.

Royal Patronage can continue the good record of the Graham Motion yard in today’s Virginia Derby – the barn have won the last three runnings and despite two average runs in the US since coming over from England, their 3 year-olds should enjoy the drop in grade in this $300,000 event.

He was a fine second in the Dante Stakes at York (England) back in May and after struggling (16th) in the English Derby at Epsom racetrack in June then headed to the US.

Still trained by his English handlers, Mark and Charlie Johnston, the 3 year-old ran well to be 5th in the Grade 1 Belmont Invitational Derby on July 9 (watch below) – beaten only 1 1/2 lengths.

Royal Patronage was then moved to the Motion stable after that Belmont race to remain in the US and was next seen running a fair 6th in the Saratoga Derby Invitational Stakes on Aug 6 – beaten 3 1/2 lengths behind the useful Nations Pride (1st), Annapolis (2nd) and Classic Causeway (3rd) (watch below).

The Motion-trained 3 year-old had around a month to get over that last race, but you feel now dropping into a Grade 3 race, he’s the clear one to beat based on those recent runs at the top table. Royal Patronage is, therefore, taken to provide the Motion camp with their fourth success in this race in as many runnings.

BACK ROYAL PATRONAGE for Tuesday’s Grade 3 Virginia Derby with BOVADA and receive a 75% CRYPTO welcome bonus (up to $750) to use on the race.

Other Virginia Derby 2022 Runners To Note

Limited Liability – Trained by Shug McGaughey lll, who won the Virginia Derby in 2011, he also ran in the Caesers Belmont Derby Invitational Stakes (7th) and just two places behind Royal Patronage (1/2 a length). While prior to that run has finished a respectable third in the Grade 2 Pennine Ridge Stakes on June 4 (watch below). The form of those runs certainly give this 3 year-old a decent chance.

Unanimous Consent – Also ran in the Pennine Ridge (4th), so is closely matched with Limited Liability and before that had caught the eye of many with three wins on the bounce at Monmouth Park, Tampa Bay and Aqueduct. Trained by the powerful Chad Brown yard that also won this prize in 2016 with Deeply Undervalued.

Grand David – A horse on the up after three straight wins at Gulfstream Park. The last of those was in the Bear’s Den Stakes on July 30. He’s now won three of his 10 starts and hit the first three in 7 of those. Certainly looks the sort to have more to give and could not be heading into the race in better form.

Vance Scholars – Has won his last two starts – both at Laurel Park. The last of those came in the Bald Eagle Derby (watch below) which was another clear step forward.

Wow Whata Summer – Ran 6th last time out in the National Museum of Racing Hall Of Fame at Saratoga, but two runs before that was a top winner of the Grade 2 Penn Mile Stakes at Penn National. A return that that form would give him a squeak.

California Frolic – Has a very consistent profile – having hit the first three in all of his last seven races. Last seen winning a silver medal in the Bear’s Den Stakes at Gulfstream Park on July 30, while at the same track took the English Channel Stakes on May 7 (watch below).

Capensis – Represents the Todd Pletcher barn that won the Virginia Derby in 2005 (English Channel) and 2007 (Red Giant). Lightly-raced and could be the improver in this Tuesday’s contest, with this set to be only be his third career run. A winner on debut at Belmont by an impressive 5 lengths and 6th last time at Saratoga in an age allowance race. You feel he’s the sort that could have more to come from a yard that know the time of day in this race.

Unanimous Consent heads the betting at 3-1, which means the bookies with the horse a 25% chance of winning today’s Virginia Derby.

All odds correct as of 02:24 on Tue 6 Sept and subject to change

Pick Up Some FREE BETS For The 2022 Virginia Derby