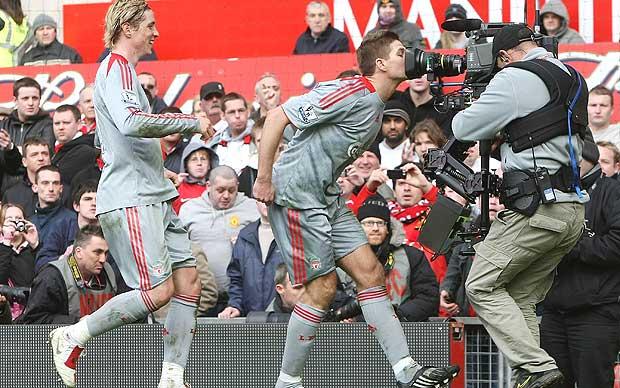 Liverpool travel to Old Trafford this weekend for another cracking north-west derby. One of the most popular fixtures in world football, featuring two of England’s most decorated clubs has brought us a lot of thrill, entertainment and unparalleled emotions over the years.

This weekend’s derby promises to be another thriller with both sides looking to prove a point after their defeats against West Ham and Swansea respectively. Both managers will have a lot to prove as well.

Brendan Rodgers is under pressure to deliver after a catastrophic season last term and Van Gaal is keen to win over his players after a dressing room mutiny.

Without further ado and speculations about the game or the result, let us travel back in time and look at some of the best Liverpool goals against Manchester United.

Here are my top 5 strikes from the Merseysiders

John Arne Riise announced himself as a cult hero at Anfield with this howitzer from 28 yards. Fabian Barthez did not have a clue what went past him.

Fabian Barthez was on the receiving end of another cracker, this time from a young Steven Gerrard from 2001.

Probably the most loved Liverpool striker after Fowler, Fernando Torres scored a magical goal after wrestling his way past Rio Ferdinand. Just when Liverpool needed an inspiration, the golden boy from Spain sent two United legends packing and lifted the Anfield roof with a world class finish.

All of Old Trafford will remember when Schmeichel was left startled by Fowler’s scorcher from an acute angle.

The former Manchester United player, once a Liverpool hero scored a memorable goal at Anfield. After a lovely flick on, the England striker raced past United and dinked it over the keeper, demonstrating his surreal composure and pace.