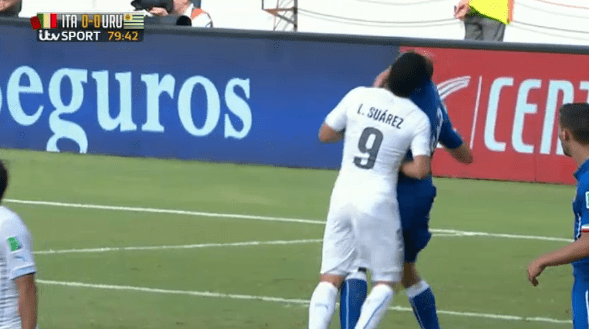 Luis Suarez is back in the news again for the wrong reasons, with the Liverpool striker appearing to bite Italian defender Georgio Chiellini as Uruguay beat ten-man Italy to progress to the last sixteen of the World Cup.

Suarez clashed with the Juventus defender as both the players jostled for a corner, with the centre-back falling to the floor in agony after the Liverpool striker’s face made contact with the Italian’s shoulder.

This is the third time Suarez has been involved in a bite incident after having done the same to PSV’s Ottman Bakkal while playing for Ajax, and again with Liverpool on Chelsea’s Branislav Ivanovic two seasons back.

In what will surely be one of the lasting images from the tournament in South America, Chiellini pulled down the top of his shirt in an attempt to show the referee what appears to be teeth marks on his shoulder, with the below image surely damning proof of Suarez’s penchant for the ludicrous and ill-advised. 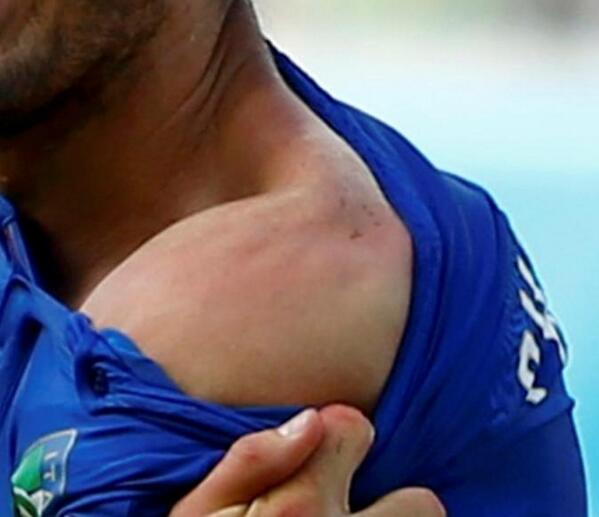 With the majority of the footballing world reeling in shock, Uruguay defender Diego Godin scored a thumping header soon after the incident to take the South Americans through to the last 16, with the Azzurri quite literally tending to their wounds in the aftermath of what was a dramatic second half in the Estádio das Dunas.