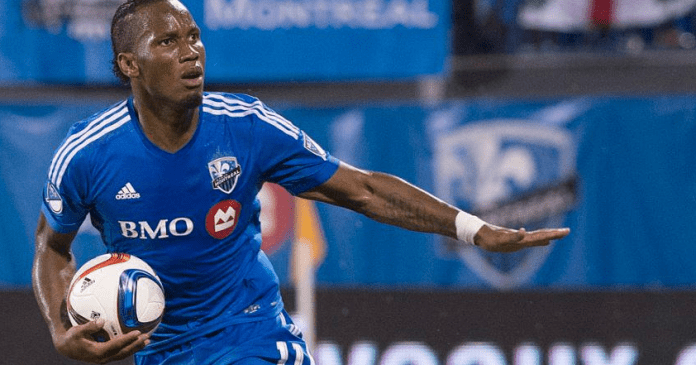 Didier Drogba proved that he’s still got what it takes to terrorise defences, as he scored a perfect hattrick (right foot, left foot, header) in his first start with Montreal Impact. The Ivorian struck thrice in the Major League Soccer encounter with Chicago Fire, and helped his side to come from behind to seal a thrilling 4-3 win.

His first came in the 27th minute, as he fired home from close range and some outstanding control to bring down Nigel Reo-Coker’s cross. His physicality was well on show, as he brushed off two Fire defenders before slotting home.

He scored his second on the hour-mark, equalising for his side to make it a 3-3 on the night. He took advantage of a quick restart to blast home with his left-foot in what turned out to be a masterclass in finishing.

Five minutes later, he got the winner. After his first effort had been saved by the goalkeeper, he followed it up and headed home from close-range to seal a memorable victory for his side.

So… @didierdrogba had a pretty good night. #IMFC https://t.co/IA74uZwIny

Drogba, who spent 9 seasons in total with Chelsea between 2004 and 2012 and then again in 2014, showed that his presence can still make a big difference. He may not have the legs to do it on a regular basis at the highest level in Europe, but his impact in the MLS is sure to be huge, judging on last night’s performances.

The 37 year-old scored over 150 goals for Chelsea and was the most reliable man in big games. He epitomised qualities like determination, heart and character and played an integral role in putting Chelsea’s name on the world map in the last decade.

The current crop of players are somewhat lacking in these attributes, and their lack of fight has been documented very clearly in the Blues’ poor start to the season. Maybe it won’t be too long before Jose Mourinho decides to re-call his favourite son from Canada.