Chelsea Set To Offload Yet Another Midfielder 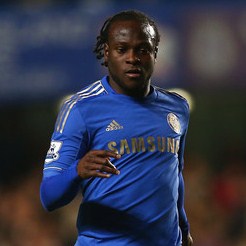 Chelsea’s pruning of the squad is set to continue, with attacking midfielder Victor Moses close to completing a loan move to Stoke City for the upcoming season. The Telegraph has reported that manager Jose Mourinho has given his assent to the deal, to enable Moses to gain more playing-time.

Chelsea have already let go off Frank Lampard this summer, while promising young midfielders Lucas Piazon, Cristian Atsu, Wallace, Bertrand Traore, John Swift and Mario Pasalic have all been sent out on loan. In the last week, there have also been talks of Marko Marin and Andre Schurrle departing.

Moses was brought to Stamford Bridge by Roberto Di Matteo in the summer of 2012, but failed to hold down a regular place in the starting XI. Even though he was played regularly in Europe, his appearances in the Premier League were rare and mostly off the substitutes’ bench.

Mourinho deemed him surplus to requirements upon his arrival last season and sent the Nigerian on loan to Liverpool. He failed to establish himself at Anfield too, making just 22 appearances throughout the season in all competitions, while starting just 6 times in the league.