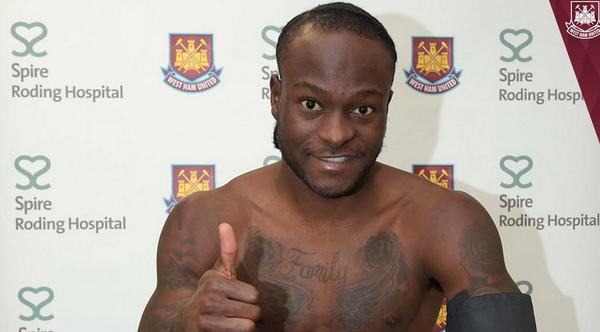 Chelsea winger Victor Moses has completed his loan move to West Ham, both the clubs have confirmed via their official twitter handle.

BREAKING: The Hammers are delighted to confirm the arrival of @VictorMoses on loan. http://t.co/N1l1JM9ZZu #WHUFC pic.twitter.com/qFCnjkeI6L

The 24-year-old spent the last two seasons on loan at Liverpool and Stoke City, and it seems he will be spending another year on loan at the Boleyn Ground.

Moses made his debut aged 16 in November 2007 for Crystal Palace. He then moved to Wigan Athletic in 2010 where he had a huge success and caught the attention of Chelsea scouts.

He joined the Blues in 2012 and has made 43 appearances in his first season with the London club, scoring ten goals.

Prior to joining West Ham, Moses have signed a four year deal with Chelsea, which means, he still has a future with the London club.

Take a look at some of the twitter reactions:

Victor Moses signs a new 4 year contract with Chelsea then is loaned straight out again. Why not just sell him.

West Ham’s lack of wingers works in Moses’ favour. Obviously he was bought to address that lack. All the best @Victormoses