Manchester United have been dealt yet another transfer blow after Benfica midfielder Enzo Perez is reportedly close to join Spanish side Valencia in the summer according to Spanish newspaper Superdeporte.

The report claims that Benfica had earlier rejected Valencia’s €25m offer for the Argentine but the Spanish side who are now financially well equipped after the takeover by Singaporean business Peter Lim, are expected to meet the €30m release clause for the player.

The deal is being guided by renowned agent Jorge Mendes after Perez had earlier claimed that his future with the Europa League runners up was uncertain. 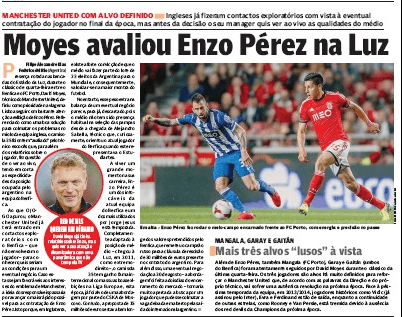 Manchester United earlier had the upper hand to acquire the services of the versatile midfielder but Valencia are now believed to be the clear favourites to sign the 27 year old.

Perez who plays as a deep lying anchorman has immense creative imagination going forward and was believed to be the answer to Red Devils’ midfield conundrum. Despite playing from a deeper role, Perez has contributed to his team’s goalscoring sheet in 46 appearances under Jorge Jesus this season.

With yet another target off their list, who will now Manchester Unitd turn to?