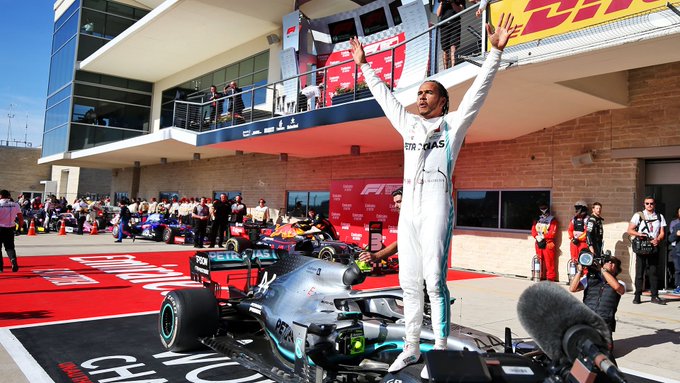 What a day for Mercedes! Lewis Hamilton finished second in the United States Grand Prix to claim his world championship F1 title.

His teammate Valtteri Bottas won the race, but that didn’t matter in the end. Hamilton has now become the second most successful F1 driver of all time, with Ferrari legend Michael Schumacher ahead of him with seven world championships.

Hamilton did well to hold off Max Verstappen to finish second as Bottas won yet another race – his fourth win this season.

F1 Driver Standings after US GP

F1 Constructors Standings after US GP

Hamilton started the race fifth on the grid. He had a poor qualifying session on Saturday but as it is always the case with him, the Brit found a way to outperform others on the race-day where it really matters.

He made quick moves to beat both the Ferrari drivers – Charles Leclerc and Sebastian Vettel around turn eight, and by the end of the first lap, he found himself back in third behind Bottas and Verstappen.

Lewis Hamilton, a six time World Champion. Can we now please begin to start recognising him as unquestionably one of the greatest our sport has ever seen, and one of the finest sportsmen Great Britain has ever produced.

Mercedes have followed the strategy of favouring the lead driver throughout the race, and so, unless Bottas made a serious error, Hamilton would have little chance of securing the pole position.

Bottas made two pit stops, while Hamilton made one stop on lap 24. He went the next 32 laps on hard tyres but the rubber was wearing out at a higher rate.

Hamilton still gave it a go, drove with control and skill and with five laps to go, he was close with his teammate Bottas. He ran Bottas wide on his outside on lap 51, but the following lap Bottas used the DRS overtaking on the long back straight.

Although he lost the race, his title was secure. All he needed was to defend his next four laps against Verstappen which he managed to do, thanks to help from a yellow flag.

It was another poor performance from Ferrari, with Leclerc finishing in fourth, and Vettel retiring after just eight laps.

Hamilton has overtaken the legendary Juan Manuel Fangio, who won five titles in the 1950s.

Like Michael Schumacher, who won five title wins on the bounce between 2000 and 2004, Hamilton has won three consecutive titles (2017-2019). It is also his fifth title in the last six years.

Hamilton has won 83 races. Only Michael Schumacher has won more, with 91. Vettel is in third place with 53 wins, but the German has been very disappointing this season.