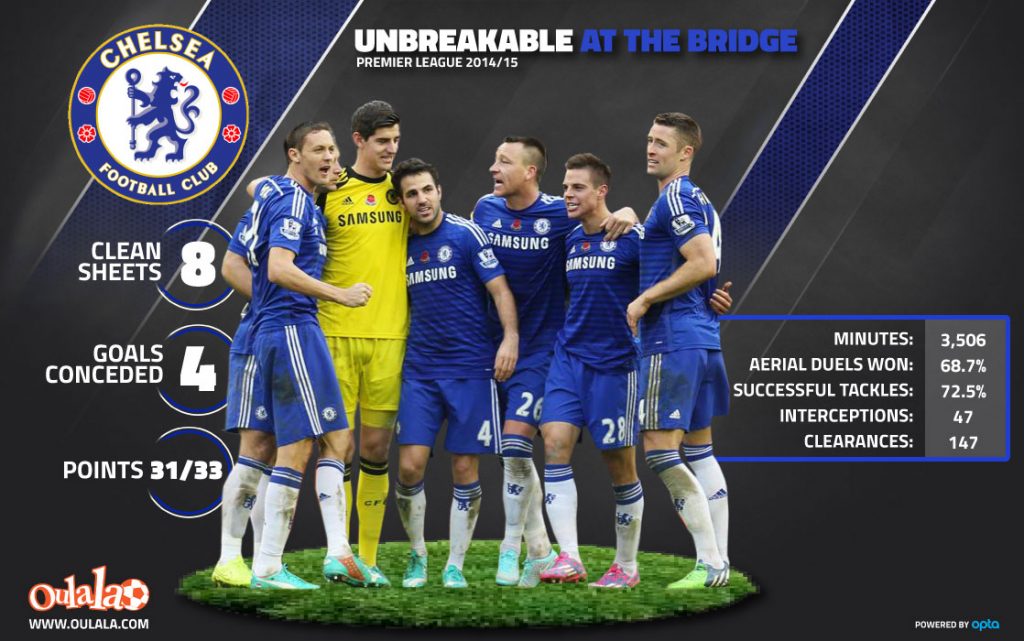 Chelsea’s Premier League home form this season has been nothing short of sensational. With 31 points from the 33 available, including 10 wins, a draw and no defeats from their first 11 games at Stamford Bridge, the back four has been the backbone to the side’s impressive run.

Manchester City sit 7 points adrift of Chelsea and with a tough away game at Stoke City awaiting them, they’ll be hoping Everton and ex-Chelsea striker Romelu Lukaku can cause an upset away to Chelsea. However with Chelsea unbeaten at home to Everton for 19 games in the Premier League, including 10 wins and 9 draws, Roberto Martinez’s side face a tough battle.

Opta powered fantasy football game Oulala have taken a closer look at the four regulars in the Blues rear-guard, namely Branislav Ivanovic, Gary Cahill, John Terry and César Azpilicueta, who have accumulated 3,506 minutes from a possible 3,960 between them at Stamford Bridge this season.

In their 11 home games the Chelsea defence have collected 8 clean sheets (72.7%) and only conceded 4 goals, that’s 1 goal every 248 minutes. In fact, they have kept 15 clean sheets from their last 19 Premier League home matches if we delve into last season (78.9%).

The impressive stats from the foursome do not stop there. At home the combined successful tackles average from the four stands at a mind-blowing 72.5%, their aerial duel success rate is 68.7%, plus they’ve made a total of 47 interceptions and 147 clearances between them.

The West London club are looking to stretch their lead further at the top of the table tonight and with Everton only scoring 1 goal in their last 3 Premier League matches and drawing blanks in 3 of their last 5 on the road, the Chelsea defence ‘should’ be in for a comfortable evening.