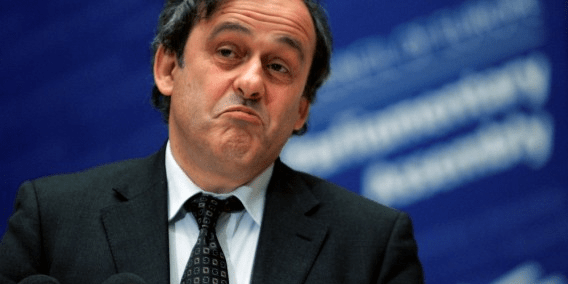 According to reports from the Guardian, UEFA President Michel Platini under is under a formal investigation by FIFA independent ethics committee and could be suspended in the coming days.

Should the Frenchman be provisionally suspended as the committee continues to review the issues raised by the Swiss attorney general, Platini would be automatically be ruled out for the FIFA Presidential elections. We had reported yesterday that FIFA President Sepp Blatter is facing criminal charges for financial corruption and was also questioned by the Swiss police.

The report from the Guardian states that Platini has cooperated with the Swiss investigators by answering questions on a two million Swiss francs transaction from Blatter. The French legend claims that he was owed the money from a contract with Fifa between 1999 and 2002 but has failed to come up with a proper explanation when asked why it took nine years for the invoice to be paid.

Thus if Platini does get suspended, there would be no way to run for the presidential elections. Platini and Blatter had earlier fallen out in 2011 when the former went back on his promise on an agreement to step down.

Should Platini gets away without suspension, he will still face the prospect of an integrity check by ethics committee before he is allowed to submit his candidature in the last week of October. Blatter meanwhile has promised to step aside anyway in February and should he get suspended, the the 79 year old Swiss will immediately step down.

Jordanian FA chief Prince Ali bin al-Hussein, who was beaten beaten to the presidency by Blatter in May said, “Change, as I have always said is a process. It is not an event. The process of change at Fifa began in May. We have an opportunity in February to carry that momentum forward. We must come together and work to restore Fifa’s credibility and reputation by bringing about the change that is so clearly needed.”

Perhaps its time to end the controversial Blatter era and the corruption that has been associated with it.