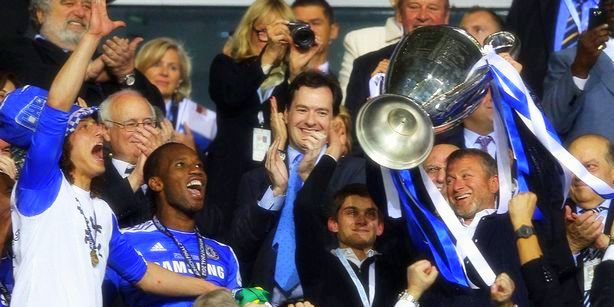 It’s a first, and that questionable honor now belongs to Chelsea FC. Perhaps the Blues will also become the first side to win the Club World Cup while not being able to defend their title.

Further up north, Manchester City also didn’t to themselves any favors by becoming the first English side who failed to win a single game in their Champions League group.

Indeed it hasn’t been a good week for England’s Sugar Daddy clubs. Chelsea FC and Manchester City from now on hold the dubious distinctions of being the worst reigning EPL-based title-holders in the history of the UEFA Champions League.

The one line, courtesy of the late great Notorious B.I.G., pretty much sums up Chelsea FC’s ‘dominance’ in Europe. Apparently not only the tenure of a Blues manager is short-lived.

If one is looking for excuses, sure, Manchester City were a bit unlucky to draw this year’s group of death, but then again, never before has the reigning EPL champion not won a single game.

Roberto Mancini has once again proven that, a decade into his managerial career, he’s still a bit clueless when it comes to Europe’s marquee club competition. At every other club with designs on the Champions League trophy he would’ve been fired by now.

There’s a reason why his name has never been linked with the most desired jobs in European football (Barcelona, Real Madrid, Bayern Munich, AC Milan, Manchester United). When it comes to Europe’s heavyweights the following names are usually tossed around: Arsene Wenger, Carlo Ancelotti, Jose Mourinho, Rafael Benitez and more recently, Pep Guardiola.

Manchester City remain in the frame for a successful title-defense but a defeat in the derby against United would open a 6 point gap on Sir Alex Ferguson’s side. At this point Roberto Mancini’s job is anything but safe. One bad sequence and he could be unemployed by new year’s.

Especially since the hunt on Europe’s most wanted alias Pep Guardiola has intensified in recent weeks. Chelsea FC are known to be long-term admirers of the Catalan manager, but Carlo Ancelotti’s wobbly domestic campaign with Paris Saint-Germain has made Guardiola an attractive (and available) candidate for the French side.

Then there’s Manchester United. According to media reports the shortlist of candidates to succeed Sir Alex Ferguson pretty much consists of just two names: Pep Guardiola and José Mourinho.

One is already available; the other could be, come summer 2013. Once Pep Guardiola ends his sabbatical, a lot of managers will become subjects to further performance reviews. Manchester City already boast two ex-FC Barcelona executives in similar positions, Ferran Soriano (CEO) and Txiki Begiristain (Director of Football) while there’s also a link with Paris Saint-Germain due to its Qatari owners.

At Chelsea Rafa Benitez is obviously keeping the seat warm for someone, whereas City offers familiar faces.

Speaking of Chelsea FC, Fernando Torres scored a very rare brace. However, the Blues still crashed out. These days El Niño cannot be relied upon to score the important goals (read: when it actually matters). Had he found his scoring boots a couple of games earlier, Chelsea FC would probably not find themselves playing Europa League fixtures on Thursdays nights. .

It’ll be quite something to watch Chelsea FC playing in the Europa League with the Club World Cup badge on their shirts (should they win this year’s edition). The ‘defending’ Champions of Europe competing in UEFA’s second tier competition. That would be unique in its own right.

Manchester United and Arsenal have also lost their Champions League fixtures but it didn’t matter much, they were already qualified. Nevertheless, it’s been a while since all English sides lost on the same matchday.

On the other end of the spectrum, all German sides have progressed into the knockout stages as winners of their respective groups (Borussia Dortmund, Bayern Munich and Schalke 04).

It makes for an interesting next round as Manchester United could square off with Real Madrid or FC Barcelona be once again paired with Arsenal FC.

Dortmund remains the dark horse but after topping Group D aka the Group of Death, anything is possible. It probably supports their cause that they can focus on the Champions League since Bayern Munich has established a stronghold on the Bundesliga standings.

Juventus Turin can also not be counted out but unless they stop their profligacy in front of goal, the Italians don’t belong in the same category.

Paris Saint-Germain is also an option but the French side is essentially a one-man show – Zlatan Ibrahimovic plus 10 others. However, the Swede has always underperformed in Europe.

In his career thus far Ibrahimovic has only scored a total of 3 goals (2 for FC Barcelona against Arsenal FC in 2009/10, and 1 for AC Milan in 2011/12, once more against the Gunners) in the knockout phase of the Champions League.

At the end of the day, the current 2012/13 Champions League campaign is already historical, or rather hysterical?

The ongoing season hasn’t been kind to Sugar-Daddy clubs; none of them top the league anywhere and only Paris Saint-Germain has managed to qualify for the knockout stages.

Chelsea FC are trying their hardest to build an attractive free-flowing football side but are stuck with Fernando Torres, who is just not suited to play in such a set-up (hint: even Spain’s Vincente Del Bosque has given up on the idea of implementing Torres!).

Paris’ Carlo Ancelotti should really do better in France, since he spent more on new recruits then the rest of Ligue 1 combinded, while Manchester City place faith upon a manager who is just not cut out for Europe’s elite.

Money can buy a lot of things, but not style (Chelsea), substance (Paris Saint-Germain) or in some cases, common sense (Manchester City).