Turin based newspaper Tuttosport are a big fan of Juventus. For obvious reasons. Few days ago they published an exclusive interview with Arturo Vidal, where the Chilean claimed Turin his ‘home’ and hinted that he is unlikely to leave Juventus any time soon.

When asked to share his thoughts on the Manchester United’s strong interest in him in the summer, he said last week:

“All I can say is I’m very happy in Turin. My family and their well-being is the most important to me and they feel great here, it’s our home. It’s never easy to leave home.”

But within one week, Vidal’s future at the club has come under intense scrutiny again, following his nightclub brawl before Juventus’s Serie A match with Roma.

Throughout the summer Vidal had been heavily linked with a move to United, but a drop in form and his knee injury were thought to be the central reasons why he wasn’t pursued till the end. Plus, there was a growing feeling that Juventus do not want to sell him, as they see him as an important member of the squad. 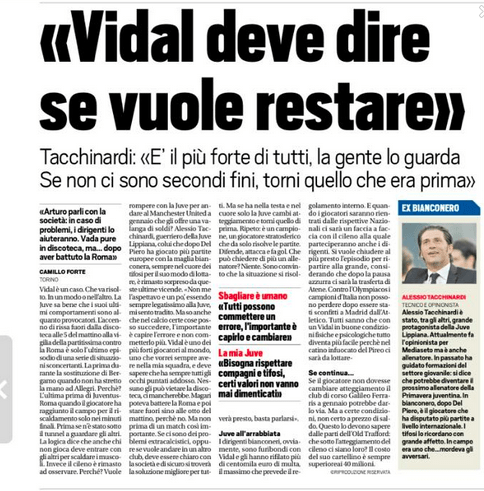 Vidal was used as a sub in Juventus’ biggest match of the season against Roma, a stance that probably suggest his standing in the squad has somewhat dropped. There could be a bigger issue going on.

Tuttosport are puzzled here. They start with – Vidal, ma che fai? It roughly means – Vidal what are you doing?

The newspaper are concerned that Vidal wants to severe ties with Juventus and join Manchester United in January, where he could earn €7m-per-year. Tuttosport are finding his behaviour ‘very strange’ while former player and club legend Tacchinardi says he should talk to the club about what he wants to do. Vidal is expected to hold a face-to-face meeting with senior players and club executives where he will be asked to speak up his mind.

It translates to – Tell that to the stakeholders. He can’t say he loves Juventus and then behave like he’s doing.

Unlike other Italian newspapers, Tuttosport aren’t the ones that jump into black and white conclusions so easily. There seems to be a genuine concern about his behaviour and they are not too sure whether he is going to stay beyond January.

Manchester United have had received negative response in their attempt to lure Roma’s Kevin Strootman, therefore, they might shift their attention back to Vidal again.