I wrote this piece couple of years ago, after the death of Gary Speed. It seems only yesterday. Want to share this with Soccerlens readers. 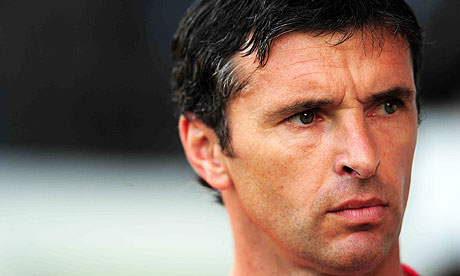 And that’s how we all feel about Gary Speed- player, manager, respected by everyone and a man seemingly loved by all. It was another ordinary morning in the UK, another shabby day for the internet hacks, another typical Twitter-day replete with Bieberized hash-tags.

And then broke the news that shook the Twitterverse, the nation, the beautiful game and every soft soul on earth who knew him as a player, manager and as a person. Everyone was shell shocked; the ‘whys’ and ‘hows’ punctuating the offering of condolences.

Before the news broke, football fans had been glued to the web seeking updates and punditry on Liverpool and league leaders Manchester City, two teams set to clash in the Super Sunday showdown.  Within an hour the anticipation of the big game had all but evaporated and in its place came the cold staleness of grief and numbing shock.

The news of him taking his own life was just hard to fathom. Why? Why did he do that? He was there yesterday speaking on BBC’s Football Focus. He was there a few hours back chatting with his Newcastle pal Alan Shearer. He had a beautiful family, he was a successful player and manager – what would have caused him to commit such an act? They say it’s down to depression, an insidious affliction that failed to manifest itself even to those around him.

His sudden passing away without even a semblance of a fight baffles us even more, for he was always known to be a fighter. As a player, as a manager he never backed down from a challenge. Everywhere he went, he became the heartthrob of that club; such was the allure of his personality. He was a Leeds United hero, appearing 248 times for the club and scored 39 goals for them. Howard Wilkinson spotted his talent at an early age, groomed and polished him and he went on to win the league title in 1992.

Then he moved to Everton, where he played only a couple of seasons. In his first season he was the joint top scorer of the club with Duncan Ferguson. He was voted the Everton Player of the Year and was rewarded with the club captaincy. Within a year, his relationship with the manager soured and he was sold to Newcastle the following season.

When you look at modern footballers, mere puppets of their agents and pawns in a great PR game, and contrast Gary Speed with them, the respect you feel for him is not forced. He could have easily engaged in the mudslinging but Speed was an exception. Before leaving Everton, he told the Liverpool Echo: “You know why I’m leaving, but I can’t explain myself publicly because it would damage the good name of Everton Football Club and I’m not prepared to do that.”

The Evertonian faithful never completely forgave him until it was too late. They often speculated about what could have caused their captain to call it quits with the Toffees, when he seemed an Evertonian at heart and by destiny. Speed took it all in his stride back then, burying the obvious grief he would have felt, at being demonized, in his heart.

May be that’s why he had no real enemies, he had given nobody a reason to hate him without paradoxically feeling a soft spot for him – and yet he was alone, somewhere within himself.

Speed was signed by Liverpool legend Kenny Dalglish for Newcastle. He went on to play for 7 years, featuring in 213 matches and scoring 29 goals. Towards the end of his career, he was transferred to Bolton Wanderers, where he became the first player to make 500 Premier League appearances, when he played in Bolton’s 4-0 victory over West Ham United in December, 2006.

Players like Shay Given and Craig Bellamy were inconsolable after the news broke out. Elland Road and Bramall Lane paid touching tributes to their most loved hero. Wreaths, scarves, banners, memoirs and unseen tear drops scattered on Gary Speed’s shrine.

For someone who died in a private moment of grief, he will always be remembered for his smile amidst the tragedy of life. At St. James’ Park, Welsh tenor Gwyn Hughes Jones delivered a rousing rendition of Bread of Heaven in front of several ex-players, legends and Speed’s family. This was followed by a minute’s applause as the fans in the East End held up cards each with number 11 in memory of their legendary midfielder.

Football as a game is embroiled in bitter rivalries based on cultural, social and political bearings. Somehow, Gary Speed’s tragic death has wiped away the bitterness from our hearts, for a day at least. For once, football truly became the beautiful game. What greater proof could there be than the sight of those Liverpool fans from the Kop singing in unison at Stamford Bridge – “There is only one Gary Speed”, despite his having been a dyed-in-the-wool Evertonian. The game could wait. This was about something more than a scoreline.

We are privileged to read and watch and hear about a man we never knew personally, but whose smile and genial aura we can relate to. We must remember him as a hero whose many appearances in the Premier League have only been surpassed by David James and Ryan Giggs, but also as a man who carried a burden until it was too much.