Sensational (but hardly original) stuff in the British red-tops this morning, with the ‘news’ that Spanish giants Real Madrid are preparing to break the bank once again this summer with a massive double raid on the Premier League for a pair of England’s finest.

I’ll only believe it when I see both Wayne Rooney and Steven Gerrard holding that famous white shirt aloft whilst being unveiled in front of a baying 50,000-strong crowd at the Bernabeu – but that’s just a personal quirk!

Real president Florentino Perez is ready to test Manchester United’s resolve (bearing in mind the club’s monolithic debts) to keep hold of Rooney by lodging an £80 million bid for the striker.

Perez will also go all out to secure the signing of the £30-million-rated Gerrard, the man that newly-appointed Los Blancos coach Jose Mourinho has outlined as his top summer transfer target. (Daily Star)

Real Madrid are also hopeful that, by including misfiring striker Karim Benzema as ballast in the deal, they will be able to tempt Manchester United into selling them their Serbian defensive rock Nemanja Vidic. (Daily Mail)

Barcelona’s €25-million-rated holding midfielder Yaya Toure is seemingly on the cusp of joining Manchester City, with recently-deposed Barca president Joan Laporta admitting that negotiations between the two parties are ‘very advanced’. (The Sun)

Another Barcelona man who could be on his way to Eastlands over the summer is Brazilian right-back Dani Alves, who has been linked with a big-money move to Manchester City after rejecting Barca’s latest contract offer. (Mail)

Manchester United have confirmed that 23-year-old winger Zoran Tosic has signed for Russian giants CSKA Moscow in a £8 million deal. The young Serb spent last season on loan in the Bundesliga with Cologne after failing to convincingly break into the first team at Old Trafford. (BBC Sport)

Arsenal target Laurent Koscielny has pleaded with his club Lorient to accept the £8.3 million bid the Gunners have made for him. (Mail)

Bolton manager Owen Coyle has admitted that if Arsenal made an offer he’d ‘be crazy not to accept’ for defender Gary Cahill, then he wouldn’t stand in the way of his highly-rated centre-back, should he wish to move on. (Sun)

Spanish side Villarreal may be close to tying up a £4.5 million deal for Tottenham’s 21-year-old Moroccan winger Adel Taraabt, who spent last season on loan at Championship side QPR. (Sun)

Tottenham have agreed to loan young duo Kyle Walker and Danny Rose to Portsmouth as soon as the Championship club’s transfer embargo is lifted. (Mail)

The Hammers have also made a £4 million bid for Hapoel Tel-Aviv’s Nigerian ‘keeper Vincent Enyeama, who excelled for his country in their opening World Cup defeat at the hands of Argentina. (Sun) 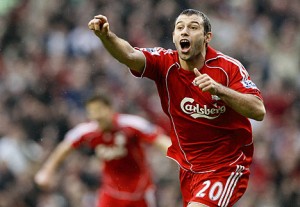 Inter Milan will meet the agent of Liverpool midfielder Javier Mascherano next week to discuss a possible move for the Argentinian. (Sky Sports Italia)

Parma are eyeing a move for AC Milan’s Georgian defender Kakha Kaladze, who is on the verge of being released by the Rossoneri. (Sky Sports Italia)

Juventus are close to wrapping up a €16.5 million deal for CSKA Moscow winger Milos Krasic after seeing off competition from Manchester City. (Sky Sports Italia)

Italian striker Luca Toni has officially terminated his contract with Bayern Munich, freeing him up to return to Serie A on a permanent basis. (ItaSport)

A meeting has been scheduled for Thursday morning between Real Madrid and Inter Milan representatives to determine the terms of Inter right-back Maicon‘s move to the Bernabeu. (MARCA)

Real Madrid are planning an audacious €30 million bid for Athletic Bilbao starlet Javi Martinez, who has been included in Spain’s World Cup squad.

Real full-back Sergio Ramos has refused to rule out a summer move to Chelsea. (IM Scouting)

Massimo Oddo will leave AC Milan this summer to join one of four Spanish clubs. Athletico Madrid are the only club to be linked by name so far. (ItaSport)