Liverpool face their second heavyweight opponent in as many weekends following their 3-1 loss at Manchester City on Monday night football.

Tottenham Hotspur have started the season with two wins and two clean sheets. Centre-back Eric Dier has scored in both.

Mauricio Pochettino appears to be getting the best out of Erik Lamela already after the Argentine struggled in the handful of games he played in last season which was mostly disrupted by injuries.

Liverpool saw a lot of possession in the opening stages of their defeat at Manchester City but could not turn it into goals. Then they were undone by poor defending at the end of the first half and into the second half.

When Tottenham look at the video footage from Monday night’s game they may well look to use Lamela and Dier down the right wing to get at the side that caused Liverpool defensive problems.

Brendan Rodgers is expected to hand a debut to new signing Mario Balotelli. The £16 million arrival from AC Milan brings a lot of excitement to Anfield and joins Daniel Sturridge and Raheem Sterling in attack.

Kyle Walker is out injured and Roberto Soldado is a doubt for the home side. The right-back has not made an appearance in the Premier League so far this season whilst the Spanish striker saw 10 minutes of action against Queens Park Rangers last weekend.

Adam Lallana, Jon Flanagan, Daniel Agger and Fabio Borini are all ruled out through injury for Brendan Rodgers’ side. A trio of defenders who started their last game; Martin Škrtel, Glen Johnson and Javi Moreno are all doubts. 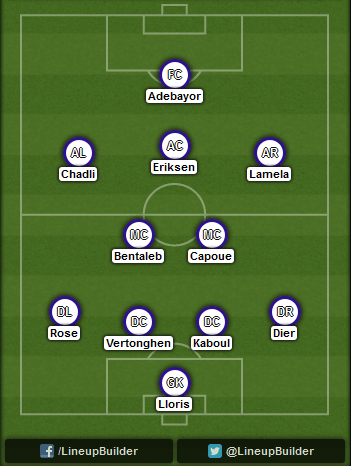 Mauricio Pochettino may feel nothing needs changing from the side that won 4-0 against Queens Park Rangers. The defence is doing better than expected but will be tested by a strong attacking Liverpool unit. Going forward they have a couple of playmakers to support Emmanuel Adebayor. Nacer Chadli grabbed two goals himself last weekend. 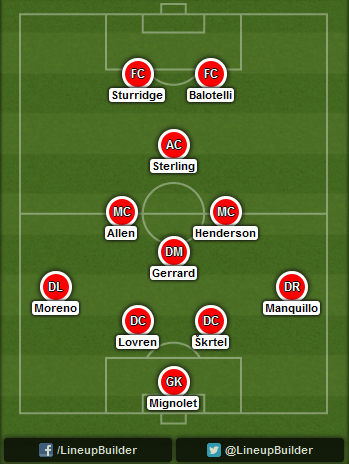 We’re being optimistic and predicting that Mario Balotelli starts. Brendan Rodgers may prefer Philippe Coutinho starting and to bring the Italian on in the second half. We’re also assuming that Glen Johnson is the only defender that doesn’t recover from his knock.

Erik Lamela vs Javi Moreno
Liverpool’s new left-back had a tough debut on Monday night after being caught out for Manchester City’s opening goal. Don’t expect things to get any easier this weekend if the Spaniard starts – Erik Lamela was highly-rated in Italy before his big money transfer to Tottenham. Their right winger has made an impressive start to the season and will be looking to create more opportunities from that wing this weekend.

Raheem Sterling vs Nabil Bentaleb
Raheem Sterling has made a lively start to the season. If the Liverpool youngster players down the middle then look at him to take on Nabil Bentaleb. Alternatively he may line up down the right wing and race Danny Rose who he should have the beating of. The Tottenham left-back may have pace but we have question marks over his defensive ability.

Christian Eriksen vs Joe Allen
Tottenham’s playmaker in the middle has had a quiet start to the season but Christian Eriksen is more than capable of taking control of any game. The Danish midfielder is very creative so should Liverpool shut down Lamela Spurs will have an option in the middle. Has a dangerous free kick on him so Joe Allen and co would be best to avoid giving away so many free kicks around the edge of the penalty area.

Prediction: Tottenham 2-2 Liverpool
These are two top teams who both have ambitions of a top four finish this season. Both are realistic options with the talent in their squads. We’re not expecting Tottenham to get thrashed like they were by the top teams last season and expect them to continue their good start to the season with a draw from this one.