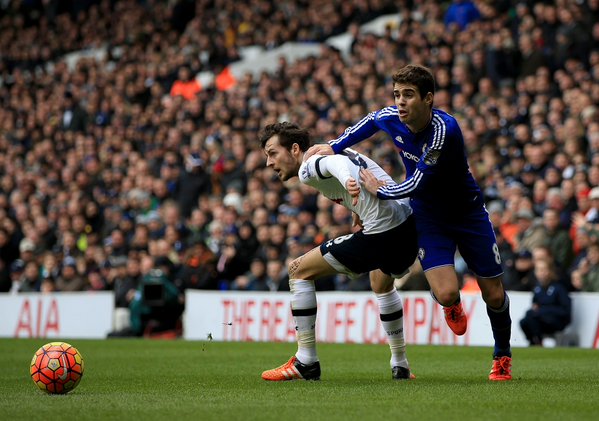 Chelsea kept their first clean sheet away from home since April in the Premier League, as Tottenham were held to a 0-0 draw at White Hart Lane on Sunday.

Walker and Rose, both didn’t feature against FK Qarabag in the midweek returned to the starting line up, while Mason and Dier marshalled the midfield.

For Chelsea, skipper John Terry missed out through injury, while Diego Costa was dropped to the bench.

After a cagey opening exchange, Spurs had their first shot on target – Kane’s effort from distance gathered safely by Begovic.

Hazard nearly gave Chelsea the lead, the Belgian meets a floating cross from Oscar but couldn’t keep the header down. Pedro, drifting from the left, came close, but the Spaniard’s shot aimed at the far post deflected over the bar.

38 – Eden Hazard made more sprints in the first half vs Tottenham than any other player in the game. Rebooted.

Son has had the best chance of the first half; his close-range header went straight to Begovic. Dembele created a shooting chance for himself with some silky touches outside the box but Begovic once again up to the task saved low to his left.

In the second half, both sides failed to create enough clear cut chances within first 10 mins. There were more tackles and obstructions than actual chances being created.

In the 64th min, Son dribbled past 2-3 players before playing a nice one-two with Lamela and shoots left footed, but it went straight into the safe gloves of Begovic.

Chelsea had the first shot on target in the 68th min through Hazard, who came close to scoring the first goal of the match. The Belgian hit a first time volley with his left-foot but Lloris produced a brilliant save to deny him.

From there on, both the sides cancelled each other out, with neither of them creating a clear cut goal scoring opportunity. In the end, both the managers seemed happy with the result.

Spurs move one point behind Arsenal (at the time of writing) and remain unbeaten in the league for 13 consecutive matches.